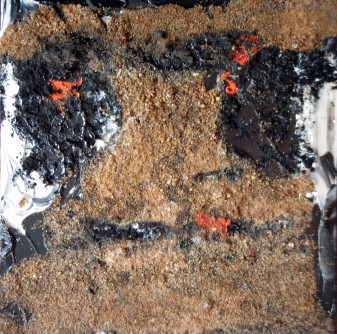 Newswise — November 30, 2015 — In celebration of the International Year of Soils 2015 (IYS), the Soil Science Society of America (SSSA) is coordinating a series of activities throughout the year to educate the public about the importance of soil. December’s theme is “Soils, Culture and People.”

According to IYS’s December monthly leader, Melanie Szulczewski, “you’ll find most of the materials used in the making of traditional artwork in the earth’s crust. These include soil for color pigments used in paints, dyes and inks; sand and minerals to create glass; and, clay for ceramics. Of course, soils are crucial for growing the food, fiber and fuel that societies use, too.” Szulczewski is an associate professor at the University of Mary Washington in Virginia.

Soil is often the subject of art as part of landscapes and farming scenes, but it can also be the art itself. You can see the beauty of soil in soil profiles and road cuts. The “Land Art Movement” which started in the 1950s, features soil and other earthen materials as the dominant feature in works of art, with the texture and color of the soil in a starring role.

Soil has inspired writers for centuries as both a subject and a metaphor. Poets, such as Walt Whitman and Emily Dickinson, have written poems that refer to soil, and in the famous Dracula novel, Dracula even imported soil from his native Transylvania to his home in England! Steinbeck’s “Grapes of Wrath,” about American life during the Dust Bowl, details the historical and social disaster that occurred due to soil erosion. And the (fictitious) detective, Sherlock Holmes, often found important clues in the soil.

In addition, each year December 5th is World Soil Day. The UN will be hosting a special celebration for International Year of Soils on Dec. 4th ( www.fao.org/soils-2015/en/).

Follow SSSA on Facebook at www.facebook.com/SSSA.soils, Twitter at SSSA Soils. SSSA also has a blog, Soils Matter, at www.soilsmatter.wordpress.com/. Additional soils information is on www.soils.org/discover-soils, for teachers at www.soils4teachers.org, and for students through 12th grade, www.soils4kids.org.

The Soil Science Society of America (SSSA) is a progressive international scientific society that fosters the transfer of knowledge and practices to sustain global soils. Based in Madison, WI, and founded in 1936, SSSA is the professional home for 6,000+ members and 1,000+ certified professionals dedicated to advancing the field of soil science. The Society provides information about soils in relation to crop production, environmental quality, ecosystem sustainability, bioremediation, waste management, recycling, and wise land use. Photo "Unibrow" by Ken Van Rees, www.kenvanrees.com/