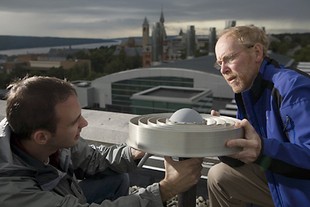 Graduate student Alessandro Cerruti, left, and Professor Paul Kintner work on the antenna on the roof of Phillips Hall. They have found that the kinds of large solar flares expected in five years or so could produce massive outages of all GPS receivers on the day side of the Earth.

"If you're driving to the beach using your car's navigation system, you'll be OK. If you're on a commercial airplane in zero visibility weather, maybe not," said Paul Kintner Jr., professor of electrical and computer engineering at Cornell and head of Cornell's GPS Laboratory.

Alessandro Cerruti, a graduate student working for Kintner, accidentally discovered the effect on Sept. 7, 2005, while operating a GPS receiver at Arecibo Observatory in Puerto Rico, one of six Cornell Scintillation Monitor (SCINTMON) receivers. Cerruti was investigating irregularities in the plasma of the Earth's ionosphere -- a phenomenon unrelated to solar flares -- when the flare occurred, causing the receiver's signal to drop significantly.

To be sure of the effect, Cerruti obtained data from other receivers operated by the Federal Aviation Administration (FAA) and the Brazilian Air Force. He found that all the receivers had suffered exactly the same degradation at the exact time of the flare regardless of the manufacturer. Furthermore, all receivers on the sunlit side of the Earth had been affected.

Cerruti will report on the findings Sept. 28 at the Institute of Navigation Meeting in Fort Worth, Texas, where he will receive the best student paper prize. The full results of the discovery will be published in a forthcoming issue of the journal Space Weather.

The flare consisted of two events about 40 minutes apart: The first lasted 70 seconds and caused a 40 percent signal drop; the second lasted 15 minutes and caused a 50 percent drop. But this flare was moderate and short-lived; in 2011 and 2012, during the next solar maximum, flares are expected to be 10 times as intense and last much longer, causing signal drops of over 90 percent for several hours.

"Soon the FAA will require that every plane have a GPS receiver transmitting its position to air traffic controllers on the ground," warned Cerruti. "But suppose one day you are on an aircraft and a solar radio burst occurs. There's an outage, and the GPS receiver cannot produce a location. ... It's a nightmare situation. But now that we know the burst's severity, we might be able to mitigate the problem."

The only solutions, suggested Kintner, are to equip receivers with weak signal-tracking algorithms or to increase the signal power from the satellites. Unfortunately, the former requires additional compromises to receiver design, and the latter requires a new satellite design that neither exists nor is planned.

"I think the best remedy is to be aware of the problem and operate GPS systems with the knowledge that they may fail during a solar flare," Kintner said.

The team was initially confused as to why the flare had caused the signal loss. Then Kintner recalled that solar flares are accompanied by solar radio bursts. Because the bursts occur over the same frequency bands at which GPS satellites transmit, receivers can become confused, leading to a loss of signal.

Had the solar flare occurred at night in Puerto Rico or had Cerruti been operating SCINTMON only at night, he would not have made the discovery.

"We normally do observations only in the tropics and only at night because that's where and when the most intense ionospheric irregularities occur," said Kintner. However, since no one had done it before, Cerruti was looking at "mid-latitudes" (between the tropics and the poles), where weaker irregularities can occur both night and day. As a result, SCINTMON detected the solar flare.

Other authors of the forthcoming paper include D.E. Gary and L.J. Lanzerotti of the New Jersey Institute of Technology, E.R. de Paula of the Instituto Nacional de Pesquisas Espaciais and Cornell research associate Hien Vo.