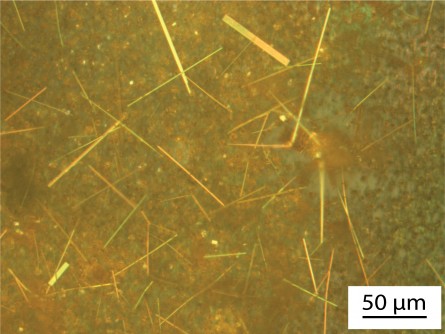 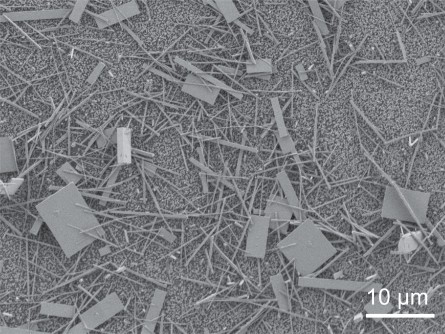 Newswise — MADISON, Wis. — Take a material that is a focus of interest in the quest for advanced solar cells. Discover a “freshman chemistry level” technique for growing that material into high-efficiency, ultra-small lasers. The result, disclosed today [Monday, April 13] in Nature Materials, is a shortcut to lasers that are extremely efficient and able to create many colors of light.

That makes these tiny lasers suitable for miniature optoelectronics, computers and sensors.

“We are working with a class of fascinating materials called organic-inorganic hybrid perovskites that are the focus of attention right now for high-efficiency solar cells that can be made from solution processes,” says Song Jin, a professor of chemistry at the University of Wisconsin-Madison.

“While most researchers make these perovskite compounds into thin films for the fabrication of solar cells, we have developed an extremely simple method to grow them into elongated crystals that make extremely promising lasers,” Jin says. The tiny rectangular crystals grown in Jin’s lab are about 10 to 100 millionths of a meter long by about 400 billionths of a meter (nanometers) across. Because their cross-section is measured in nanometers, these crystals are called nanowires.

Jin says the nanowires grow in about 20 hours once a glass plate coated with a solid reactant is submerged in a solution of the second reactant. “There’s no heat, no vacuum, no special equipment needed,” says Jin. “They grow in a beaker on the lab bench.”

“The single-crystal perovskite nanowires grown from solutions at room temperature are high quality, almost free of defects, and they have the nice reflective parallel facets that a laser needs,” Jin explains. “Most importantly, according to the conventional measures of lasing quality and efficiency, they are real standouts.”

When tested in the lab of Jin’s collaborator, Xiaoyang Zhu of Columbia University, the lasers were nearly 100 percent efficient. Essentially every photon absorbed produced a photon of laser light. “The advantage of these nanowire lasers is the much higher efficiency, by at least one order of magnitude, over existing ones,” says Zhu.

Lasers are devices that make coherent, pure-color light when stimulated with energy. “Coherent” means the light waves are moving synchronously, with their high and low points occurring at the same place. Coherence and the single-wavelength, pure color give lasers their most valuable properties. Lasers are used everywhere from DVD players, optical communications and surgery to cutting metal.

Nanowire lasers have the potential to enhance efficiency and miniaturize devices, and could be used in devices that merge optical and electronic technology for computing, communication and sensors.

“These are simply the best nanowire lasers by all performance criteria,” says Jin, “even when compared to materials grown in high temperature and high vacuum. Perovskites are intrinsically good materials for lasing, but when they are grown into high-quality crystals with the proper size and shape, they really shine.”

What is also exciting is that simply tweaking the recipe for growing the nanowires could create a series of lasers that emit a specific wavelength of light in many areas of the visible spectrum.

Before these nanowire lasers can be used in practical applications, Jin says their chemical stability must be improved. Also important is finding a way to stimulate the laser with electricity rather than light, which was just demonstrated.

The collaborative research was funded by the U.S. Department of Energy Basic Energy Sciences program. Graduate student Yongping Fu designed, synthesized and characterized the perovskite nanowires in Jin’s lab in Madison. Haiming Zhu, a postdoctoral researcher in Zhu’s lab at Columbia, carried out the optical studies of those nanowires and established their remarkable lasing properties. 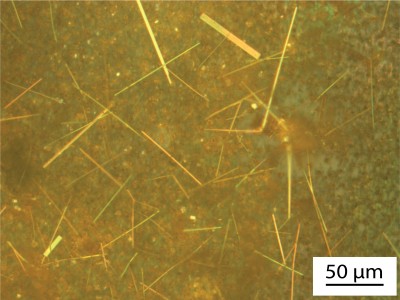 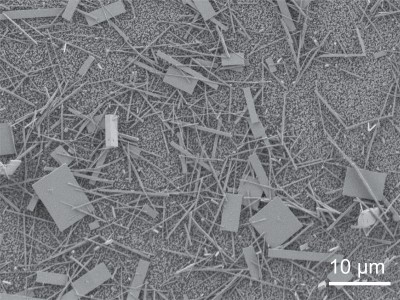