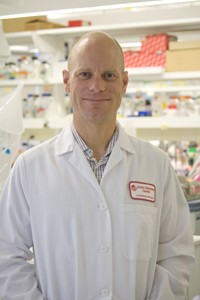 Stephan Kissler, Ph.D., Investigator in the Section on Immunobiology at Joslin Diabetes Center and Assistant Professor of Medicine at Harvard Medical School.

Newswise — BOSTON – (April 11, 2016) – In type 1 diabetes, the immune system attacks the body’s own insulin-producing cells. Scientists understand reasonably well how this autoimmune attack progresses, but they don’t understand what triggers the attack or how to stop it, says Stephan Kissler, Ph.D., Investigator in the Section on Immunobiology at Joslin Diabetes Center and Assistant Professor of Medicine at Harvard Medical School.

Mutations in dozens of genes raise the risk of the disease by small but significant amounts, and researchers are painstakingly uncovering how each gene might contribute. Now the Kissler lab has shown one way in which one such gene, called RGS1, may help to foster the autoimmune attack.

In the attack, immune cells called T cells infiltrate the pancreas and damage the insulin-producing beta cells. Another type of immune cells called B cells produce antibodies and are also involved. In a mouse model of type 1 diabetes, RGS1 affects the population of one type of T cell called a “T follicular helper cell” that is critical for B cells and antibody production, Dr. Kissler and his colleagues reported recently in Genes and Immunity.

“In a nutshell, what we found is that this gene has an effect on the frequency of these T follicular helper cells, which are important for the B cells and seem to be important for the disease,” says Dr. Kissler, who is also an assistant professor of medicine at Harvard Medical School.

The finding was particularly striking because clinical studies have found that the number of these cells in the blood is higher in people with type 1 diabetes.

However, Dr. Kissler’s group discovered that reducing levels of the RGS1 protein did not slow the progression of the disease in mouse models, suggesting that it may not offer much potential for human treatment.

“Inhibiting RGS1 didn’t prevent autoimmune diabetes from happening, which is slightly disappointing but not surprising because any one of these genes in humans has a very small effect on risk,” says Dr. Kissler.

His lab focuses on genes associated with higher risk of type 1 diabetes that also play a role in other autoimmune diseases. Additionally, Dr. Kissler’s group narrows in on genes such as RGS1 that help to regulate cell migration. Mutations of RGS1 are associated with several autoimmune diseases, including multiple sclerosis, and a drug targeting cell migration has been approved to treat multiple sclerosis, he notes.

While the scientists had speculated that inhibiting RGS1 would lower the migration of T cells into the pancreas, they didn’t find evidence for that movement in their mouse models. They did discover that the inhibition changes the ways cells move within lymph nodes and the spleen, organs in which T follicular helper cells interact with B cells to promote antibody production.

Several pieces of evidence suggest that B cells are major players in type 1 diabetes, Dr. Kissler says. Among them, certain antibodies that are linked to autoimmune attack and produced by B cells are the best known indicators for risk of type 1 diabetes.

Lymph nodes and the spleen have “follicular” regions full of B cells, and other regions full of T cells. “The RGS1 gene is important to allow activated T cells to move into the regions with all the B cells, where they help the B cells get activated and produce antibodies,” he explains. “These are the T follicular helper cells. If you don’t have any of these cells, the antibody production doesn’t work anymore.”

“Overall, the T follicular helper cells are important for B cells, you have more of those T cells in people with type 1 diabetes, they seem to be very important for the disease, and we have a new explanation of why RGS1 has been implicated,” Dr. Kissler sums up.

“We’re continuing to test a number of other genes to see if one strikes us as being a very potent modifier of type 1 diabetes,” he adds. ““The more pieces of this puzzle we can lay down, the better a picture we have to figure out the best ways to intervene in the disease. And this piece of information about RGS1 might become valuable down the line when we know more about other genes, because it might fall into place in the puzzle.”

Celia Caballero-Franco, PhD, a postdoctoral fellow in the Kissler lab, was first author on the paper. Lead funding came from the National Institutes of Health and the JDRF.