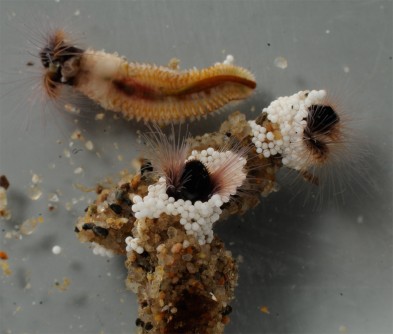 By creating a glue mimicking an adhesive that sandcastle worms use to make shelters, researchers may have solved a surgical problem causing premature births.

EMBARGOED FOR RELEASE: Monday, Aug. 11, 2014, 5 a.m. Eastern Time  Note to journalists: Please report that this research will be presented at a meeting of the American Chemical Society.

Newswise — SAN FRANCISCO, Aug. 11, 2014 — In creating an adhesive patterned after glue produced by the lowly underwater sandcastle worm, researchers are reporting today that they may have solved the problem of premature births that sometimes result from fetal surgery. It also could open up numerous opportunities to safely perform more complex fetal surgeries in the future. Their report will be presented as part of the 248th National Meeting & Exposition of the American Chemical Society (ACS), the world’s largest scientific society.

The meeting, attended by thousands of scientists, features nearly 12,000 reports on new advances in science and other topics. It is being held here through Thursday.

Ruptures of the fetal membranes, or the sac containing the developing baby, occur when surgeons operate on a fetus. It can also happen when they check the fetus for problems such as anatomical abnormalities with a fetoscope, a long, wand-like instrument with a tiny camera at the end. To make room for it, they first create a channel to the fetus using a device with a sharp tip. But this also punctures the fetal membranes. If this causes a leak or rupture, there is a good chance it will lead to a premature birth, the researchers say.

“There are currently no effective treatments for preventing fetal membrane rupture caused by in utero surgery,” says study leader Russell J. Stewart, Ph.D. “Using glue in the fluid-filled uterus is challenging. Our water-borne, non-swelling, non-toxic adhesives that won’t dissolve in water have ideal properties for this challenging environment. The evidence so far suggests we likely will be able to solve this problem.”

The team, in its new research, turned to the sandcastle worm to help solve the problem of creating an adhesive that sticks in a wet environment like the uterus. These creatures routinely glue particles together into protective shelters while completely submerged in water. “The problem of gluing things together underwater has been solved over and over in nature, in many different ways,” says Stewart, who is with University of Utah. “Understanding the composition, packaging and chemical mechanisms of natural adhesives is a good starting point for engineering practical and cost-effective synthetic underwater adhesives.”

Stewart explains that the team made synthetic polymers that mimic the strong adhesive proteins that sandcastle worms produce. These polymers are charged and can spontaneously come together. They form a “water-immiscible fluid,” which means that the polymer adhesive remains separate from water when placed in the body. Thus, it can do its job of repairing punctures.

The team focused on developing a synthetic glue because natural glue can’t be harvested directly from the worms or produced from recombinant genes in hosts, he explains. Stewart says another advantage of these new polymers is that they are inexpensive. He adds that they also could be used for nonmedical purposes –– in underwater glues and paints.

“Our adhesive is many times stronger than fibrin-based tissue sealants, which are already approved for clinical use, but are ineffective for sealing fetal membranes,” according to Stewart. And, he says, since the synthetic glue doesn’t mix with water, it doesn’t swell. This is critical for a tissue adhesive inside the body.

He also will report on successful initial experiments with the adhesive in animal tests. This work was done in collaboration with Ken Moise, Jr., M.D., and Ramesh Papanna, M.D., of the Texas Fetal Center. Papanna says that the innovation opens up opportunities for surgeons to perform more complex fetal interventions that are just too risky to attempt currently, such as treating spina bifida.

The researchers acknowledge funding from the National Institutes of Health and the Office of Naval Research.