Something is Lurking in the Heart of Quasar 3C 279 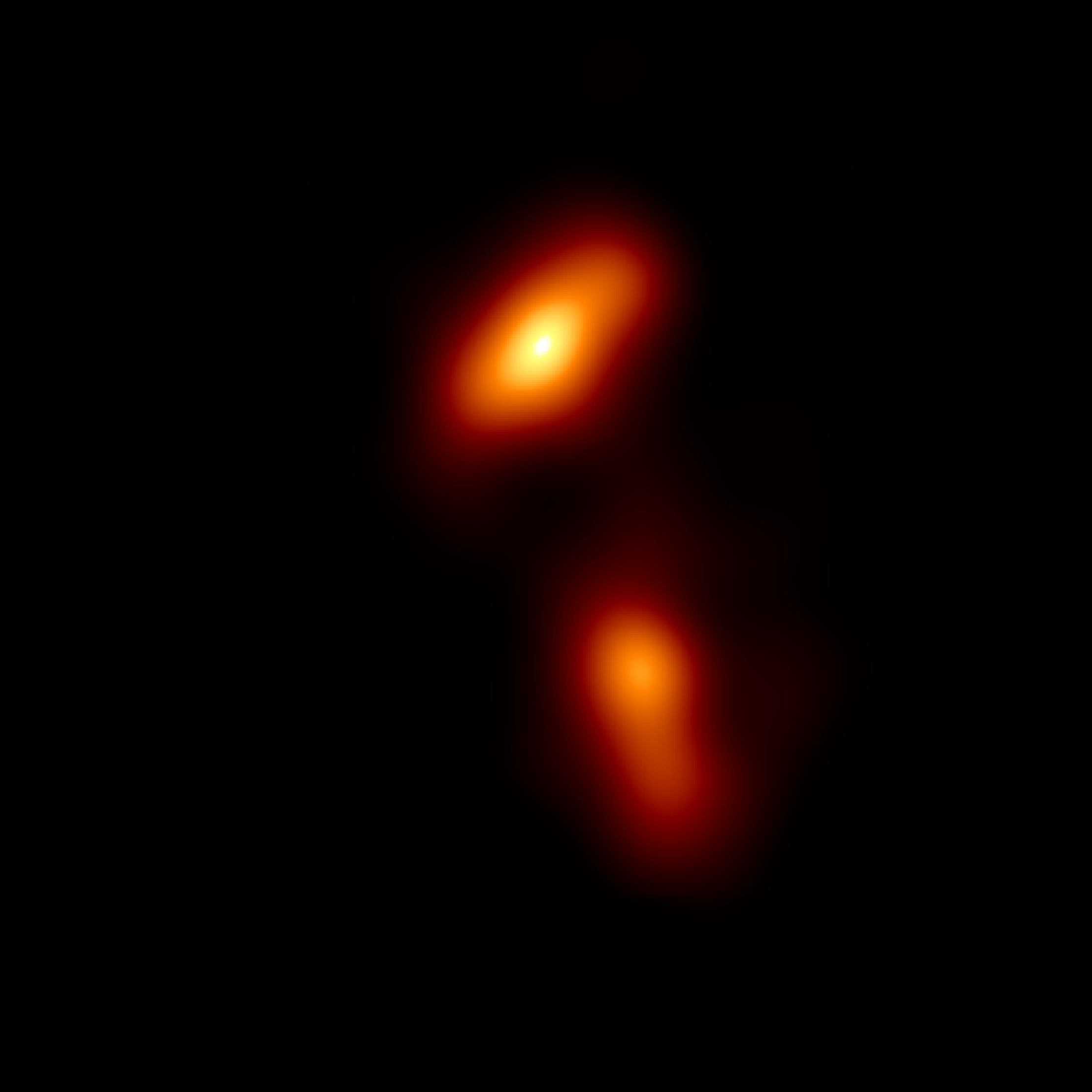 Event Horizon Telescope image of the jet structure of quasar 3C 279 in April 2017. 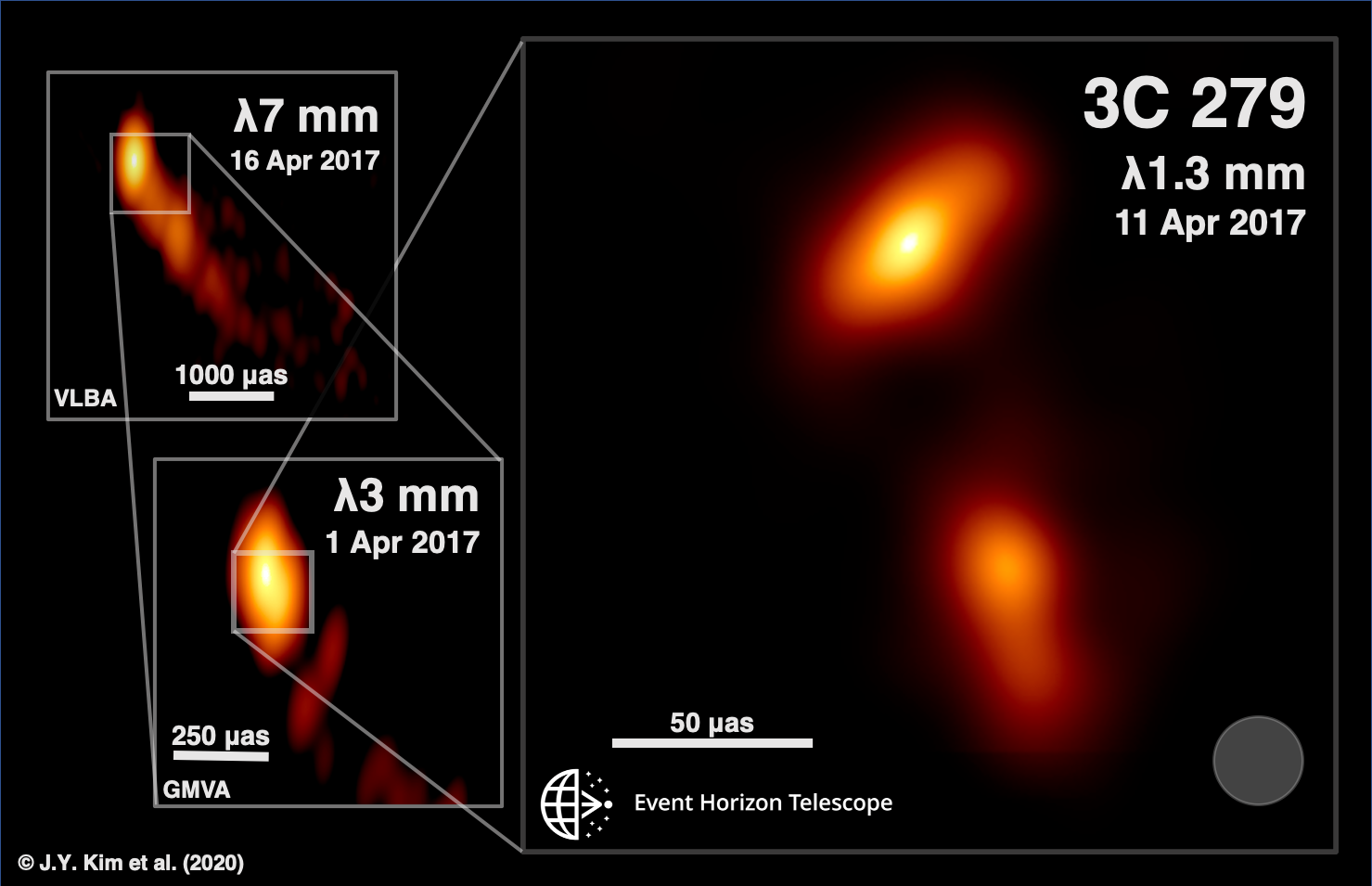 Illustration of multiwavelength 3C 279 jet structure in April 2017. The observing epochs, arrays, and wavelengths are noted at each panel. 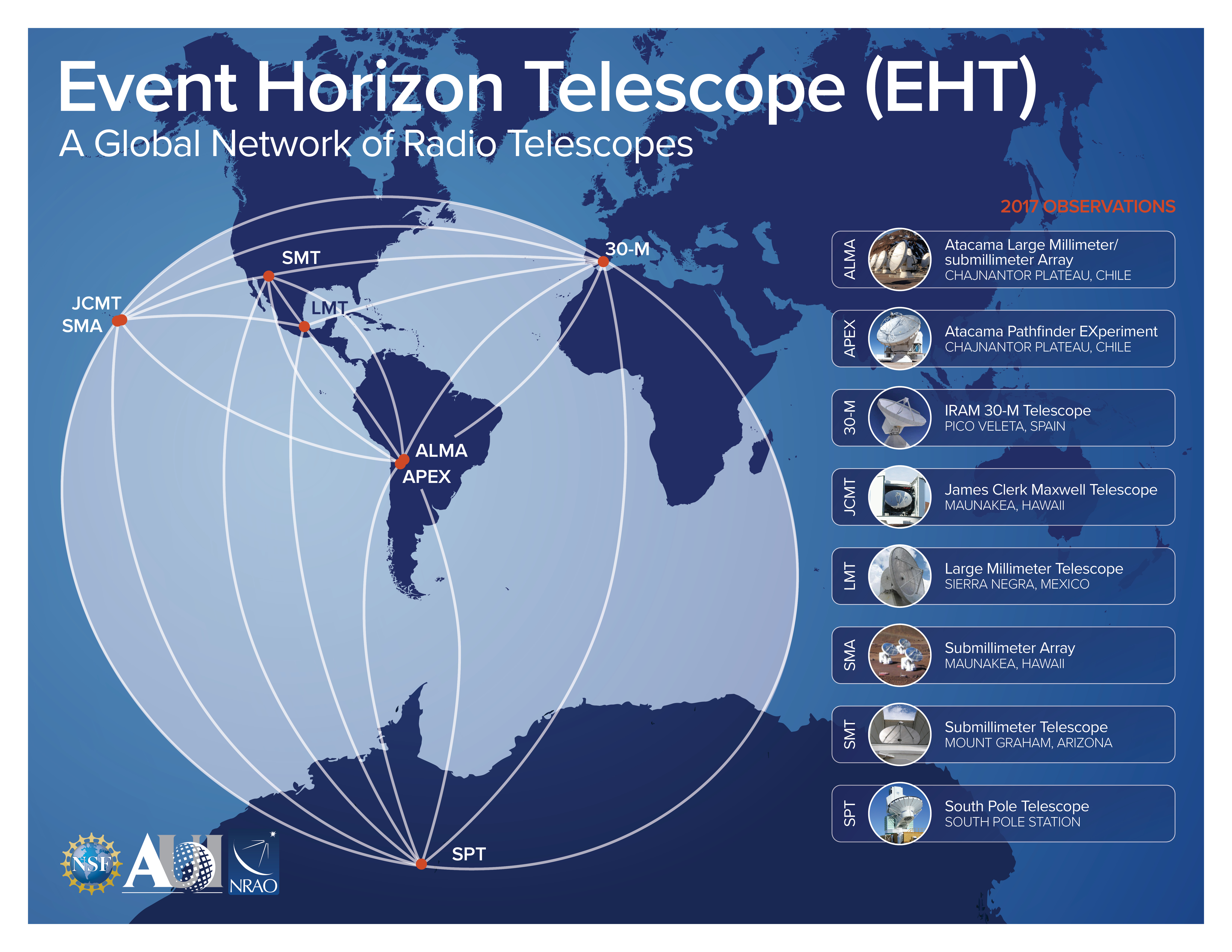 Diagram of the EHT Network used for the observations in 2017.

Newswise — One year ago, the Event Horizon Telescope (EHT) Collaboration published the first image of a black hole in the nearby radio galaxy M 87. Now the collaboration has extracted new information from the EHT data on the distant quasar 3C 279: they observed the finest detail ever seen in a jet produced by a supermassive black hole. New analyses, led by Jae-Young Kim from the Max Planck Institute for Radio Astronomy in Bonn, Germany, enabled the collaboration to trace the jet back to its launch point, close to where violently variable radiation from across the electromagnetic spectrum arises.

The results are published in the coming issue of “Astronomy & Astrophysics”, April 2020.

The EHT collaboration continues extracting information from the groundbreaking data collected in its global campaign in April 2017. One target of the observations was a galaxy 5 billion light-years away in the constellation Virgo that scientists classify as a quasar because an ultra-luminous source of energy at its center shines and flickers as gas falls into a giant black hole. The target, 3C 279, contains a black hole about one billion times more massive than our Sun. Twin fire-hose-like jets of plasma erupt from the black hole and disk system at velocities close to the speed of light: a consequence of the enormous forces unleashed as matter descends into the black hole’s immense gravity.

To capture the new image, the EHT uses a technique called very long baseline interferometry (VLBI), which synchronizes and links radio dishes around the world. By combining this network to form one huge virtual Earth-size telescope, the EHT is able to resolve objects as small as 20 micro-arcseconds on the sky — the equivalent of someone on Earth identifying an orange on the Moon. Data recorded at all the EHT sites around the world is transported to special supercomputers at the Max Planck Institute for Radio Astronomy in Bonn and at MIT’s Haystack Observatory in Westford, Massachusetts, where they are combined. The combined data set is then carefully calibrated and analyzed by a team of experts, which then enables EHT scientists to produce images with the finest detail possible from the surface of the Earth.

The newly analyzed data show that the normally straight jet has an unexpected twisted shape at its base. Jae-Young Kim, lead author of the paper, is enthusiastic and at the same time puzzled: “We knew that every time you open a new window to the universe you can find something new. Here, where we expected to find the region where the jet forms by going to the sharpest image possible, we find a kind of perpendicular structure. This is like finding a very different shape by opening the smallest matryoshka doll.”

“The results are very surprising,” said Kazunori Akiyama, a Jansky Fellow of the National Radio Astronomy Observatory (NRAO) at MIT Haystack who developed imaging techniques for the EHT to create the first images of the black hole in M87, and which were also used to create the images of quasar 3C 279. “When we observed the quasar for four days within one week, we assumed that we would not see these dynamical changes because the source is so far away (100 times further from Earth than M87). But the EHT observations were so sharp that for the first time we could see tiny changes in motions of the jets within this time frame.”

3C 279 has a very active nucleus that can be observed across all wavelengths. The jet in the nucleus has already been monitored for over two decades with the National Science Foundation’s Very Long Baseline Array (VLBA). Astronomers Alan Marscher and Svetlana Jorstad of Boston University lead a project called VLBA-BU-BLAZAR, to relate outbursts of gamma-rays and X-rays to changes in the jet seen in VLBA images at a wavelength of 7 millimeters.

The VLBA images reveal that 3C 279 shoots “blobs” of high-energy particles and magnetic fields down a jet at velocities up to 99.96% of the speed of light. “Surprisingly, the speeds vary over time, as does the direction that the blobs move when they first appear,” said Marscher. “This implies that the jets are propelled in a complex way from a jet launching region about 0.4 light-years across, which can be explored by shorter wavelength observations with the Event Horizon Telescope. The EHT observations have the potential to see how the blobs form and accelerate as they move farther from the black hole into the jet seen in the VLBA images.”

Avery Broderick, an astrophysicist working at the Perimeter Institute and University of Waterloo in Ontario, Canada, said: “For 3C 279, the combination of the transformative resolution of the EHT and new computational tools for interpreting its data have proved revelatory. What was a single radio ‘core’ is now resolved into two independent complexes. And they move – even on scales as small as light-months, the jet in 3C 279 is speeding toward us at more than 99.5% of light speed!”

Because of this rapid motion, the jet in 3C 279 appears to move at about 20 times the speed of light. “This extraordinary optical illusion arises because the material is racing toward us, chasing down the very light it is emitting and making it appear to be moving faster than it is,” clarifies Dom Pesce, a postdoctoral fellow at the Center for Astrophysics | Harvard & Smithsonian (CfA). The unexpected geometry suggests the presence of traveling shocks or instabilities in a bent, rotating jet, which might also explain emission at high energies such as gamma-rays.

“This result is a dream come true for anyone studying how jets are launched,” says Violette Impellizzeri, lead astronomer for the Atacama Large Millimeter/submillimeter Array (ALMA) VLBI observations. “I am particularly thrilled to have been supporting these observations. I did my PhD with this group and we were already working hard on resolving the jet foot point already 15 years ago. With the help of ALMA and all others telescopes in the array, the EHT is really getting there!”

The EHT array is always improving, explains Shep Doeleman, EHT Founding Director. “These new quasar results demonstrate that the unique EHT capabilities can address a wide range of science questions, which will only grow as we continue to add new telescopes to the array. Our team is now working on a next-generation EHT array that will greatly sharpen the focus on black holes and allow us to make the first black hole movies.”

The international collaboration announced the first-ever image of a black hole at the heart of the radio galaxy Messier 87 on April 10, 2019 by creating a virtual Earth-sized telescope. Supported by considerable international investment, the EHT links existing telescopes using novel systems — creating a new instrument with the highest angular resolving power that has yet been achieved.

The VLBA-BU-BLAZAR project has been supported by the National Science Foundation and NASA’s Fermi guest investigator program.

Caption: Illustration of multiwavelength 3C 279 jet structure in April 2017. The observing epochs, arrays, and wavelengths are noted at each panel.

Caption: Diagram of the EHT Network used for the observations in 2017.