21-Jul-2015 11:05 AM EDT, by National Institute of Biomedical Imaging and Bioengineering
favorite_border 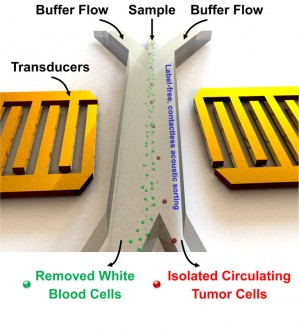 Schematic of acoustic tweezers separating cancer cells from blood cells. Yellow transducers supply sound to move the cells as they pass through the high throughput device.

Newswise — The capture and analysis of circulating tumor cells (CTCs) in the blood of cancer patients is a valuable tool for treatment decisions and therapy monitoring. Until recently, it was a huge challenge to capture these rare cells in a blood sample. In a new approach, researchers funded by the National Institute of Biomedical Imaging and Bioengineering have developed a system that efficiently isolates CTCs using sound waves, without physical contact or damage to the cells, assuring that their original characteristics are maintained. The contact-free nature of the method offers the potential for more precise cancer treatment and monitoring, and new discoveries on how cancer spreads.

“The group has developed gentle and efficient acoustic tweezers,” explains Richard Conroy, Ph.D., Director of the NIBIB Program in Diagnostic and Interventional Ultrasound, “These tweezers can move and manipulate thousands of cells without touching them, preserving their characteristics. Development of tools like this will have a significant number of applications in both the research lab and the clinic.”

The low-cost acoustic cell-separation device was developed by a research team led by Tony Jun Huang, Ph.D., at Pennsylvania State University, and his collaborators at the Massachusetts Institute of Technology, Notre Dame University, Penn State Hershey Cancer Center, and Carnegie Mellon University. The work is described in the April issue of the Proceedings of the National Academy of Sciences.

The potential for CTCs to provide valuable information about a patient’s tumor has driven development of technologies to isolate these rare cells that travel through the blood after breaking off from the primary tumor. Current clinical techniques generally fall into two categories, each of which can damage or alter the characteristics of CTCs during isolation. The first depends on antibodies binding to a protein on the surface of the CTCs. One disadvantage of this technique is that the surface protein must be known ahead of time to determine which antibody should be used. This can cause CTCs to be missed, especially as the tumor evolves in response to chemotherapy and surface proteins change.

The second method separates CTCs based on their physical characteristics such as size and weight. Although this method does not rely on antibodies, it can change the CTCs’ properties because of the physical stress caused by techniques such as rapid spinning in a centrifuge, which helps separate the larger cancer cells from smaller white blood cells. With these techniques, after they are isolated the captured CTCs may not still represent the characteristics of the parent tumor.

The new method uses sound, or acoustic waves, similar to the waves in an ultrasound imaging test, to gently separate CTCs from other blood cells without touching the CTCs. Blood samples from cancer patients are streamed across a microfluidic chip where only a fraction of a second of acoustic waves can separate the blood cells from the CTCs, based on their significant difference in size and weight. However, it is better than other size and weight-sorting methods because the brief acoustic exposure exerts little to no stress on the cells--maximizing the potential of CTCs to be maintained, and analyzed in their native state.

With the goal of moving this promising technology to the clinic, the group fine-tuned the system combining a mixture of cultured cancer cells and white blood cells (WBCs). Tests were done on this mixture to determine the parameters, including blood flow rates and acoustic wavelengths, that resulted in the most rapid and efficient cell separation. Their experiments resulted in a 20-fold increase in the efficiency of the separation system with a cancer cell recovery rate of more than 83%. The group then tested the optimized conditions on blood samples from three breast cancer patients, demonstrating their ability to successfully isolate CTCs from patients at a clinically useful rate.

“The current throughput is still far from ideal,” explains Huang, “but it enables us to test the clinical utility of acoustic based separation, which has never been achieved before. We are working on improving the device design to allow acoustic separation processing at a rate of 7.5 mL of blood in one hour, which will exceed most of the current CTC separation methods.”

The new method has many advantages: it is automated, biocompatible, does not change the properties of the cells, and is contained in an inexpensive and compact device. The improved efficiency of the acoustic separation of CTCs is expected to enhance performance in other applications as well, such as separating blood components, synchronizing cells for precise studies of cell division and growth, and separating bacteria from blood and other body fluids. 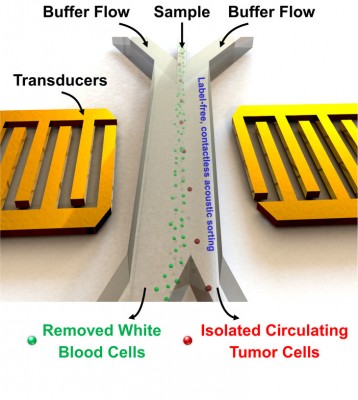