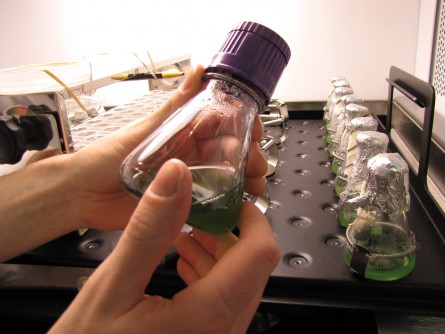 A NASA-funded project explores using blue-green algae as a "cyanofactory" to produce fuel and other benefits. 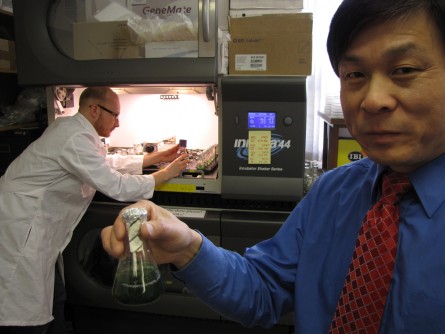 Newswise — Humans may move one step closer to colonizing space thanks to a new research project that NASA is funding at South Dakota State University, the South Dakota School of Mines and Technology and Oglala Lakota College.

The South Dakota institutions have won a National Aeronautics and Space Administration grant of $750,000 to study ways to use cyanobacteria to make energy-dense fuels and high-value chemicals, oxygen, and cleansed water directly from carbon dioxide, sunlight, and wastewater.

“This project will help NASA’s Aeronautics Research Mission Directorate address the goal of providing renewable, energy-dense biofuels in a sustainable manner, while supplying technology to sequester carbon dioxide released by an astronautics crew,” Zhou said. “Cyanobacteria, through billions of years of evolution, have become well-tuned biological devices that can efficiently harvest solar energy, the one limitless source of energy on Earth, and convert that energy into a variety of reduced carbon compounds. Because of their simple requirements for rapid growth and ease of genetic manipulation as well as industrialized production, cyanobacteria are particularly attractive organisms for biofuel production.”

Because sunlight is available in space, life support systems that rely in part on photosynthesis to grow algae are one possibility for moving humans beyond Earth’s atmosphere.

The grant was awarded through NASA's Experimental Program to Stimulate Competitive Research, or EPSCoR. The program helps develop partnerships between NASA research missions and programs, academic institutions and industry. It also helps states establish long-term academic research enterprises that will be self-sustaining and competitive and will contribute to the states' economic viability and development.

The researchers and NASA believe the project could provide "game changing" technology to NASA’s Office of the Chief Technologist. It could help resolve critical issues in what NASA calls its "Space Power and Energy Storage" and the "Human Health, Life Support and Habitation Systems" roadmaps — essentially summaries of what is needed to achieve national and agency goals in human space exploration over the next few decades.

The proposal addresses two of NASA's grand challenges — space colonization and affordable abundant power. The Exploration Systems Mission and Space Operations Mission Directorates will benefit by development of an integrated system that can support colonization missions by producing chemical building blocks and fuels from sunlight, wastes, and carbon dioxide; and by producing oxygen and clean water to maintain life support.

The project also proposes to develop an integrated photobioreactor and product recovery system, driven by solar power provided by light fibers; to strengthen collaborations with the NASA Ames Research Center to also improve performance of the Offshore Membrane Enclosures for Growing Algae system; to enhance multi-disciplinary undergraduate and graduate education on molecular engineering, bioprocessing systems, and applied photonics, including Native American students; and to collaborate with industrial partners to promote economic development in South Dakota.

“Our initial target product is a long chain alcohol with a much higher energy density than ethanol,” Zhou said. “This cyanofactory platform could be easily reengineered to produce other fuels and chemicals using free solar energy and carbon dioxide.”

The initial work that led to the grant award came from the proof of concept program developed by SDSU's Technology Transfer Office with funding made available through the Small Business Administration. Additional support has been provided by the South Dakota Agricultural Experiment Station, the Center for Bioprocessing Research and Development, and the North Central Sun Grant Center. 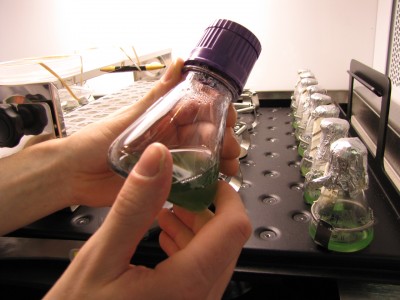 Caption: A NASA-funded project explores using blue-green algae as a "cyanofactory" to produce fuel and other benefits. 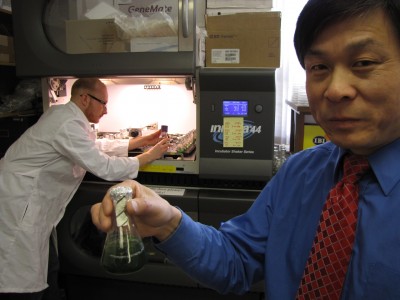