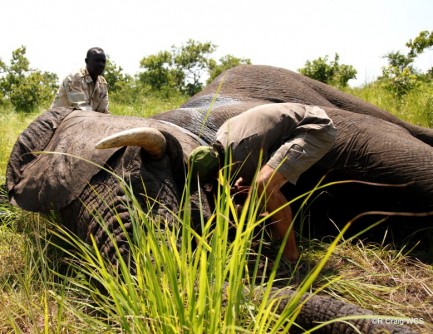 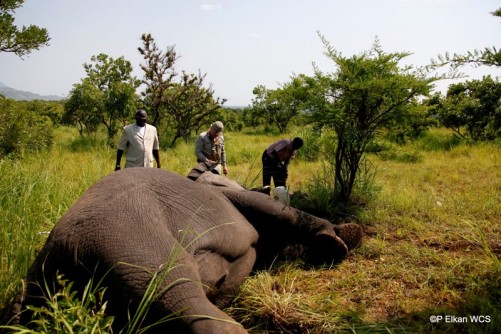 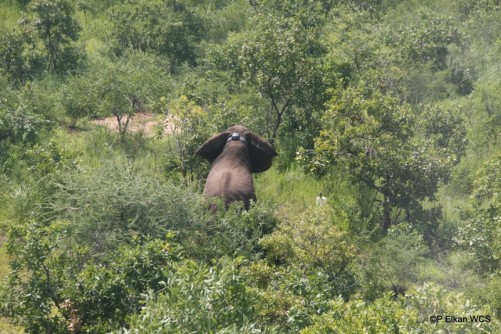 Elephant standing up after immobilization and collaring, Republic of South Sudan.

Newswise — With expert assistance from the Wildlife Conservation Society and funding from USAID, South Sudan’s Ministry of Wildlife Conservation and Tourism (MWCT) has ramped up efforts to protect its last elephants by fitting individual animals with GPS collars for remote tracking, a critical practice in the fight against ivory poachers.

In late May and early June, participants from WCS and MWCT succeeded in collaring elephants to track and monitor the majority of South Sudan’s remaining populations, which collectively are estimated to total fewer than 5,000 elephants, down from the 80,000 thought to inhabit the region in the 1960s-70s. Elephant herds in South Sudan were decimated during years of civil war and the survivors are under increasing threat due to insecurity and an increase in ivory poaching. The situation has been made worse by the presence of rebel groups in the sub-region, including the Lord’s Resistance Army, which have poached elephants and trafficked ivory as means of sustaining their operations, according to confirmed reports.

The GPS/satellite tracking effort is part of a USAID/WCS funded elephant monitoring and protection program launched in 2009, an initiative that also includes aerial surveillance from planes, land-based anti-poaching patrols, and intelligence-led enforcement.

“I salute the efforts and bravery of the Government of South Sudan’s wildlife personnel and WCS staff who are working to protect wildlife and manage protected areas in these remote zones,” said Dr. Cristián Samper, President and CEO of WCS. “The recent expansion of the South Sudan elephant monitoring and protection program is evidence of the serious measures and commitment needed to help secure the country’s protected areas and wildlife for the benefit of the people and new nation.”

Dr. Paul Elkan, WCS’s South Sudan Country Director, said: “The elephant collaring is critical to improving our understanding of the location and movements of South Sudan’s elephants and providing effective protection. Real-time location data from the collared elephants, combined with aerial surveillance, intelligence-led enforcement, and terrestrial patrolling, will enable the MWCT and WCS to watch over the safety of the elephant groups, detect poaching threats, target anti-poaching operations to arrest poachers and traffickers, and secure the elephants.”

The elephant collaring operation was undertaken by WCS experts and staff of the Ministry with the support of a helicopter and two WCS survey aircraft, successfully completing the objective of covering the majority of the remaining elephant populations across the country. The team was unable to immobilize and collar elephants in the Boma National Park area, where armed conflict prevented access. These remaining elephant groups will be collared later in the year, security permitting.

“The presence of these elephants breathes life and value into our national parks,” said the Hon. Gabriel Changson Chang, Minister of Wildlife Conservation and Tourism, who joined the collaring operation in Nimule National Park and fixed a collar on an adult female elephant. “We must do everything in our means to protect these magnificent creatures. It is our wildlife that will be the basis for developing tourism that will attract visitors from all over the world to South Sudan.”

Monica Moore, USAID South Sudan’s Chief of the Office of Transition and Conflict Mitigation, who oversees USAID support to the conservation programs in the country, said: “Monitoring and protection of the elephant populations is essential for conservation and directly contributes to improving governance and security in remote areas of the country. The involvement of armed groups in ivory poaching, trafficking, and local conflicts in and around protected areas is well documented in Africa. USAID’s support to the MWCT and WCS efforts in South Sudan combines conservation and conflict reduction objectives to help improve security for both people and wildlife, while securing the foundation for development of the new country.”

During the extensive aerial efforts to locate and track elephant groups, the team also collected systematic data on the relative abundance and distribution of other large animals including hippos, Nile lechwe (a species of antelope), shoebill (a species of stork-like bird), giraffes, buffalos, migratory antelopes, and other species. Information on human activity in and around the protected areas and wildlife corridors was gathered as well. The wildlife tracking program is also monitoring GPS/satellite collars previously deployed on key migratory antelope species white-eared kob, tiang, and giant eland. This data will directly contribute to the implementation of effective wildlife protection measures that will address elephant poaching and the escalating commercial bushmeat trade in South Sudan, and inform the design of protected area management and tourism strategies.

Information from GPS/tracking, aerial surveys, and socio-economic surveys with local communities are also informing a country wide protected area network assessment WCS is undertaking with the Ministry, with support from USAID and UNDP/ GEF, to optimize the network’s coverage to conserve the remaining wildlife and habitat resources. The assessment includes: proposing the creation of new protected areas and corridors; realigning boundaries of existing ones; and de-gazetting some protected areas that have lost their conservation value.

Recent insecurity in the Boma National Park has brought tragedy and suffering to the areas in and around the protected area, creating an obstacle to tourism development there in the near future. In April and May of 2013 the armed conflict between a rebel militia group and the government’s armed forces reached the eastern sector of the park, resulting in tragic loss of life, displacement of many people, and destruction of park infrastructure. The Boma National Park Warden Brig. Kolor Pino, three wildlife rangers, and two policemen were killed in the line of duty while traveling to the park headquarters.

In response to the recent armed conflict and tragic losses in Boma National Park, MWCT, WCS and USAID are currently assessing the situation in cooperation with the security forces of the Government of South Sudan and local community leaders. Plans are being developed to recover and rehabilitate park operations as soon as the security situation permits. Dr. Samper underlined: “We will work with our government counterparts in South Sudan, USAID, and GEF/UNDP, as well as other development partners, to ensure the resumption of our conservation operations in Boma and support for the local communities.” 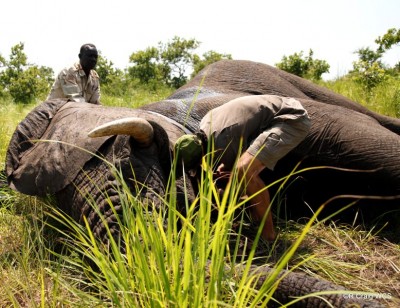 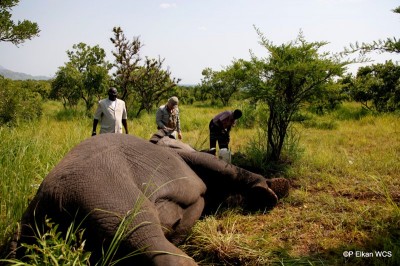 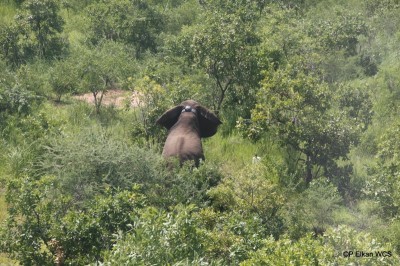 Caption: Elephant standing up after immobilization and collaring, Republic of South Sudan.