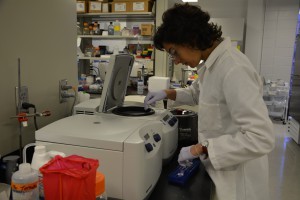 Southern Research scientists are working on projects to develop novel drugs for a number of diseases, including cancer and Alzheimer’s.

Newswise — A Southern Research team led by President and CEO Art Tipton will travel to next week’s BIO International conference for focused meetings that center on a promising pipeline of early-stage drug candidates for diseases such as Alzheimer’s, Parkinson’s, diabetes and cancer.

BIO International is the world’s largest annual life sciences conference and a prime gathering spot for leaders in the global pharmaceutical and biotechnology industries. Last year’s conference attracted more than 16,000 attendees from 76 countries.

While in San Diego, California, for BIO 2017, the Southern Research team will participate in more than two dozen one-on-one meetings with high-level representatives from a wide range of organizations based around the world. The conference begins Monday, June 19, and runs through Thursday, June 22.

Tipton, Ph.D., said the objective of the mission is to advance the early-stage pipeline of therapeutics being developed in Southern Research’s laboratories and through a partnership with the University of Alabama at Birmingham (UAB), a longtime collaborator.

“Pharmaceutical companies want to talk with us because of the promise represented in this pipeline and the potential that the world-class drug discovery work being conducted in Birmingham will yield a future blockbuster,” Tipton said.

“These companies are searching for molecules needed to fill their pipelines, and we have the talent and capabilities to help them,” he added.

The ADDA is a strategic collaboration that unites the talents and resources of Southern Research and the UAB School of Medicine in a coordinated drug discovery and development program.

The ADDA pipeline today consists of 18 potential therapies, including possible treatments for Central Nervous System disorders, several types of cancer, bacterial infections, and conditions such as Diabetes and kidney disease.

“Southern Research has an unparalleled capacity to investigate a broad range of potential treatments for complicated conditions such as Alzheimer’s, Parkinson’s, and many forms of cancer,” Suto said.

“With a comprehensive Drug Discovery program in place, we can identify new targets and take our research to the next level to develop novel therapies.”

Ravera said the Southern Research team’s scheduled meetings reflect the board, international nature of the BIO conference. The team will meet with large pharmaceutical companies and with small biotech firms, as well as mid-size companies that focus of regions such as Europe or East Asia.

Some of these meetings will be to introduce Southern Research and its programs to potential partner companies, he said. Other meetings will advance on-going licensing and research collaboration discussions, he said.

“Having the Southern Research drug discovery team at BIO is important because it is the largest conference for the pharmaceutical industry in the world in terms of number of participants and companies, and geographical diversity,” Ravera said.

“We can get a lot of meetings in place and get a lot done, then spend the rest of the year following up on contacts and on discussions that were initiated at BIO.”

The organizers of BIO 2017 say 2,500 CEOs from more than 4,000 companies in fields ranging from drug discovery, bio-manufacturing, genomics, biofuels, nanotechnology and cell therapy will attend the conference at the San Diego Convention Center.

Southern Research, a non-profit organization founded in Alabama in 1941, has an established track record in drug discovery. Its scientists have discovered seven FDA-approved drugs used in cancer treatment, and they have played a role in the development of many more.