Sowing the Seeds of Change

With her gardening kit startup, senior Stella Liu hopes to motivate people to grow their own food 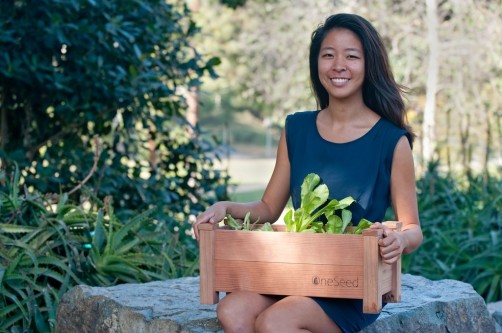 “My vision for OneSeed is that everyone with a windowsill, balcony or backyard can have their own garden,” says Stella Liu, a fourth-year international studies major at UCI.

Newswise — Stella Liu wanted to solve a problem. She knew that her peers were passionate about local organic food and curious about growing their own fruits and vegetables. But many of them had no gardening experience, lived in apartments or were intimidated by massive home improvement stores, with their endless options for soil, fertilizer and tools.

That’s where OneSeed comes in. It’s a subscription-based, all-in-one gardening kit that arrives on the doorstep with three plants in a handcrafted redwood planter. Each season, new seedlings are delivered so that subscribers can exercise their green thumb year-round. Online videos supplement the experience, and salad recipes are provided for enjoying the fruits of one’s labor.

“My vision for OneSeed is that everyone with a windowsill, balcony or backyard can have their own garden,” says Liu, a fourth-year international studies major at UC Irvine. She hopes to motivate people to start growing their own food and to connect with where their food comes from.

Liu first unveiled the idea in November 2014 at Startup Weekend Orange County. The Google-sponsored challenge brings together students and professionals to form fledgling companies in 54 hours. Liu was one of 20 participants with proposals – and one of eight who prevailed. She assembled a team of pros (a civil engineer, two website developers, one business analyst, a Web designer, a startup expert and a photographer) to refine her concept and create a website.

“Our goal was to build a product that could really impact the world,” Liu says.

The inspiration for the project came from an alternative spring break trip in 2012 to the village of Mastatal, Costa Rica. UCI’s global sustainability and cultural immersion program in the Central American nation annually brings 16 students to an environmental learning center specializing in organic farming and sustainable development.

OneSeed fits squarely into the model of social entrepreneurship. It’s a for-profit venture that seeks to have a positive effect on the environment and society. Some of its earnings are used to help start community gardens in food-insecure neighborhoods so that low-income families will have access to fresh, healthy produce.

A member of UCI’s Campuswide Honors Program, Liu is also involved with humanitarian projects on campus. She’s collaborating on a weeklong “Break the Silence” event starting Monday, April 27, to raise awareness of forced migration, displacement and refugee populations. Liu came up with the idea during a solo backpacking trip to Cambodia.

But on most weekends, she can be found at farmers markets in Irvine and Costa Mesa, promoting OneSeed. It’s a labor of love, although she recognizes that the odds are stacked against her.

“They say that nine out of 10 startups fail,” Liu notes. “But my motto is to enjoy the journey over the destination. If OneSeed succeeds, that’s great. If it fails, that’s okay too. It’s the people I’ve met along the way, the lessons I learned, and the opportunity to put an idea into action that made this experience worthwhile.”