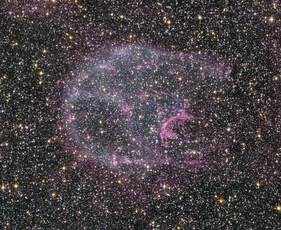 Intricate wisps of glowing gas float amid a myriad of stars in this image created by combining data from NASA's Hubble Space Telescope and Chandra X-ray Observatory. The gas is a supernova remnant, catalogued as N132D, ejected from the explosion of a massive star that occurred some 3,000 years ago. This titanic explosion took place in the Large Magellanic Cloud, a nearby neighbor galaxy of our own Milky Way.

Newswise — Intricate wisps of glowing gas float amid a myriad of stars in this image created by combining data from NASA's Hubble Space Telescope and Chandra X-ray Observatory. The gas is a supernova remnant, cataloged as N132D, ejected from the explosion of a massive star that occurred some 3,000 years ago. This titanic explosion took place in the Large Magellanic Cloud, a nearby neighbor galaxy of our own Milky Way.

The complex structure of N132D is due to the expanding supersonic shock wave from the explosion impacting the interstellar gas of the LMC. Deep within the remnant, the Hubble visible light image reveals a crescent-shaped cloud of pink emission from hydrogen gas, and soft purple wisps that correspond to regions of glowing oxygen emission. A dense background of colorful stars in the LMC is alsoshown in the Hubble image.

The large horseshoe-shaped gas cloud on the left-hand side of the remnant is glowing in X-rays, as imaged by Chandra. In order to emit X-rays, the gas must have been heated to a temperature of about 18 million degrees Fahrenheit (10 million degrees Celsius). A supernova-generated shock wave traveling at a velocity of more than four million miles per hour (2,000 kilometers per second) is continuing to propagate through the low-density medium today. The shock front where the material from the supernova collides with ambient interstellar material in the LMC is responsible for these high temperatures.

It is estimated that the star that exploded as a supernova to produce the N132D remnant was 10 to 15 times more massive than our own Sun. As fast-moving ejecta from the explosion slam into the cool, dense interstellar clouds in the LMC, complex shock fronts are created.

A supernova remnant like N132D provides a rare opportunity for direct observation of stellar material, because it is made of gas that was recently hidden deep inside a star. Thus it provides information on stellar evolution and the creation of chemical elements such as oxygen through nuclear reactions in their cores. Such observations also help reveal how the interstellar medium (the gas that occupies the vast spaces between the stars) is enriched with chemical elements because of supernova explosions. Later on, these elements are incorporated into new generations of stars and their accompanying planets.

Visible only from Earth's southern hemisphere, the LMC is an irregular galaxy lying about 160,000 light-years from the Milky Way. The supernova remnant appears to be about 3,000 years old, but since its light took 160,000 years to reach us, the explosion actually occurred some 163,000 years ago.

This composite image of N132D was created by the Hubble Heritage team from visible-light data taken in January 2004 with Hubble's Advanced Camera for Surveys, and X-ray images obtained in July 2000 by Chandra's Advanced CCD Imaging Spectrometer. This marks the first Hubble Heritage image that combines pictures taken by two separate space observatories. The Hubble data include color filters that sample starlight in the blue, green, and red portions of the spectrum, as well as the pink emission from glowing hydrogen gas. The Chandra data are assigned blue in the color composite, in accordance with the much higher energy of the X-rays, emitted from extremely hot gas. This gas does not emit a significant amount of optical light, and was only detected by Chandra.

The Space Telescope Science Institute (STScI) is operated by the Association of Universities for Research in Astronomy, Inc. (AURA), for NASA, under contract with the Goddard Space Flight Center, Greenbelt, Md. The Hubble Space Telescope is a project of international cooperation between NASA and the European Space Agency (ESA).