18-Nov-2014 10:00 AM EST, by University of Virginia Darden School of Business
favorite_border 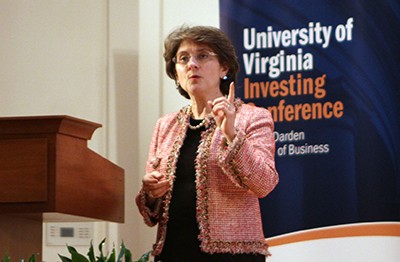 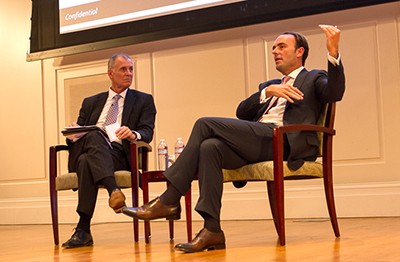 Newswise — CHARLOTTESVILLE, Virginia — 17 November 2014 — Nancy Lazar, a partner of Cornerstone Macro, told investors something they wanted to hear. The U.S. economy is on solid footing. “The tailwinds are tremendous,” she said at the 7th annual University of Virginia Investing Conference.

Headwinds to economic growth in the U.S. exist and include geopolitical turmoil, Federal Reserve tightening and foreign economic slowdown, she said. The housing recovery in the United States is also slow. And consumer growth has not been a major driver of growth.

“But we have a healthy private sector. That’s why the stock market is doing well.” Though Europe is still a mess, there’s more good news. Since 1990, after every drop in oil prices and decline in global short rates, growth has been stimulated, she said.The “Investing in Innovation” conference — which began Thursday at the University of Virginia Darden School of Business and concluded Friday — brought experts from around the world to offer their insights and thoughts on topics ranging from technology to the world economy. The event was hosted by the newly named Richard A. Mayo Center for Asset Management at the Darden School of Business.

Darden alumnus Ned Hooper (MBA ’94), founder and managing partner of Centerview Capital, said some entrepreneurs and investors believed innovation would slow in the 21st century after a 20th century of incredible changes, which included electricity, indoor plumbing, and television and radio. “But what we’re seeing is an accelerated pace of innovations. Innovation is the single most important driver of the local economy,” said Hooper.

Hooper, also a board director for InfiniteZ, a startup driving innovation in immersive, holography platforms, added that, “Innovation starts with hardware and is complemented by cheaper and faster storage and cheap, ubiquitous connectivity.” And everything in technology is getting cheaper and more available.

He believes a tech bubble is forming, but not as large as the one that popped in 2000. “There are a lot of signs that we’re overvaluing,” said Hooper. “We know this will adjust and decline in the future. But it’s not as broad based as the one in 2000. The overvaluation tends to be isolated.”

Cyberattacks Are a Constant Threat

That issue was addressed in depth Thursday when Kathy Warden, corporate vice president and president of Northrop Grumman’s Information Systems sector, told investors that no one was safe from cyberattacks. “With the proliferation of technology, there’s a whole new breed of threats,” she said. “But human capital is the limiting factor in cybersecurity.” She said the need for cybersecurity professionals is dire, with tens of thousands needing to be trained.

John Siegel, a partner at Columbia Capital, said cyberattacks are not just coming from lone hackers but can come from nation-states. “Imagine thousands of guys banging away at servers.”

Michael F. Sola, vice president of T. Rowe Price Group Inc. and T. Rowe Price Associates Inc., said a product that fully protects against cyberattacks would be invaluable. “If a product does produce a protection like that it will be bought and deployed.”

The conference concluded with words from Kyle Bass, principal of Hayman Capital Management LP, who described Argentina’s economic woes though he urged investing in the country. The country defaulted in 2001, has no access to capital markets because of lawsuits over a debt exchange, and appears to be “circling the drain.”

“But in actuality, the country is….fiscally solid,” said Bass. Upcoming elections should improve the country’s leadership and settling the lawsuits will allow access to money markets.

“You want to invest right now when things look so bad it couldn’t get worse,” said Bass.

Darden’s Richard A. Mayo Center for Asset Management will present the second annual Shanghai Investing Summit on 8 May 2015. Held in Shanghai, China, the summit’s theme will be “Cross-Border Investing.”

About the Darden School of Business The University of Virginia Darden School of Business delivers the world’s best business education experience to prepare entrepreneurial, global and responsible leaders through its MBA, Ph.D. and Executive Education programs. Darden’s top-ranked faculty is renowned for teaching excellence and advances practical business knowledge through research. Darden was established in 1955 at the University of Virginia, a top public university founded by Thomas Jefferson in 1819 in Charlottesville, Virginia.

About the Richard A. Mayo Center for Asset ManagementThe Richard A. Mayo Center for Asset Management, one of 10 research Centers of Excellence at the University of Virginia Darden School of Business, advances the study and practice of asset management through top-quality research, regular conferences and activities, support for the MBA student club Darden Capital Management and the development of educational programs.