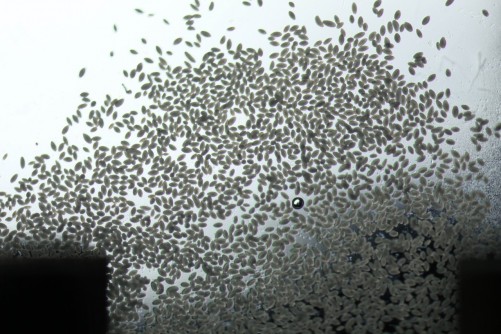 Microscopic image of the thread cells that unravel under mixing to form the hagfish’s slime.

Newswise — WASHINGTON, D.C., February 13, 2017 -- Hagfish are marine fish shaped like eels, famous for releasing large quantities of “slime” that unfolds, assembles and expands into the surrounding water in response to a threat or a predator’s attack. This defense mechanism even works against sharks by effectively clogging their gills or choking them.

The hagfish’s successful use of its defense gel is remarkable, particularly because the animal exerts no direct control over the concentration of the slime it exudes into the seawater.

Gaurav Chaudhary, a doctoral candidate in the department of mechanical science and engineering at the University of Illinois at Urbana-Champaign (UIUC), will present his work on hagfish slime during the 88th Annual Meeting of The Society of Rheology, being held Feb. 12-16, in Tampa, Florida. The research explores the hagfish’s slime formation and the special properties allowing it to assemble into a solid gel without dissolving into the surrounding water.

To do this, Chaudhary and his colleagues visited the University of Guelph in Canada, where Professor Doug Fudge maintains a large stock of hagfish.

“We obtained raw slime material directly from live fish and then were able to produce our own slime samples of varying concentrations,” said Chaudhary. The researchers used a rheometer, which measures the response of such unusual viscosity fluids to forces, to measure how the slime stretched and flowed over time and under various conditions.

The research team, led by Randy Ewoldt, an assistant professor who runs the Ewoldt Research Group at UIUC, discovered that the slime’s solid- and liquid-like properties remain “self-similar” for a wide range of concentrations. This means that even though the concentration may change dramatically, the general structure and properties of the gel will not.

“The gel becomes stiffer with concentration,” Ewoldt said. Their results also show that the consistency in how the slime deforms and flows exists because the slime has a similar structure at all concentrations.

“We now know that this material, 10,000 times softer than Gelatin, isn’t just an ultra-soft elastic solid as earlier believed,” Chaudhary said. “Rather, it has very interesting time-dependent properties. Its concentration-dependent properties are very different compared with many other biopolymer or synthetic systems. Such properties make slime distinctly ideal for assembling under uncontrolled conditions.”

Slime has a myriad of potential applications. For example, it could plug or slow leaks from oil drilling equipment, or provide cell cultures with a sparse network of fibrous elements that may offer unique tissue scaffolds architectures and even support 3-D cell cultures.

“Our future efforts will focus on gaining a better understanding of the mechanics of the slime’s microstructural level,” Chaudhary said. “We’d eventually like to develop materials to achieve similar functionality as hagfish slime by using synthetic components, and further develop ideas and methods to better engineer the material.”

The group’s work is supported by the National Science Foundation—Award Number 1342408.

The presentation BA1 "Network formation in an infinite sea of water: Concentration-dependent rheology of hagfish defense gel," by Gaurav Chaudhary, will be in a session beginning at 10:00 a.m. Monday, Feb. 13, 2017 in Track 2/ Room Audubon DEF at the Grand Hyatt Tampa Bay.ABSTRACT: https://www.rheology.org/SoR172/ViewPaper?ID=189

The Annual Meeting of The Society of Rheology is typically held in mid-October. The meetings ordinarily last three to four days and are open to both members and non-members. Every effort is made to stimulate and encourage fruitful discussion during the technical sessions, with 25 minutes normally allotted to the presentation and discussion of each paper. There are normally no more than four simultaneous sessions, and the program includes plenary lectures, special symposia, informal evening discussions, and instrument exhibits. A banquet is held to honor the recipients of the Society's awards: the Bingham Medal, the Journal of Rheology Publication Award, and the Distinguished Service Award, all for outstanding contributions to rheology. The Annual Meeting for those years during which an International Congress of Rheology occurs (2004, 2008, etc.) is held early in the following year (except when the ICR is held in the United States).

Embargoed press releases describing in detail some of the breakthroughs to be discussed at the meeting are available on Newswise and Alpha Galileo or by contacting the Media Line at the American Institute of Physics at [email protected] or 301-209-3090.

Rheology, a branch of mechanics, is the study of those properties of materials which determine their response to mechanical force. The word rheology was coined in the 1920's to represent the science of the deformation and flow of matter, and The Society of Rheology was officially formed on December 9, 1929. Meetings of The Society have been held at least annually since that time. The Society has sponsored publication of technical and scientific papers in this field in various journals, currently in its own Journal of Rheology.

Rheology enters in some form into almost every study of material properties, and many physicists, chemists, engineers, biologists and mathematicians find a common meeting ground in The Society's meetings and publications. It is a small society compared to many others, membership currently being about 1,700. The membership represents a wide spectrum of individuals from academic, industrial, and governmental institutions whose activities include both phenomenological and molecular theories, instrumentation, the study of many types of materials such as polymers, metals, petroleum products, rubber, paint, printing ink, ceramics and glass, foods, biological materials, floor preparations and cosmetics, and a wide range of practical applications.

The Society of Rheology is one of the five founding members of the American Institute of Physics. By virtue of this affiliation, all Members of The Society receive the Institute's monthly publication Physics Today without extra charge, and join with other physicists in sponsoring the many general activities of the Institute including publication, translation, manpower studies, and projects on the history of physics. The Society is also affiliated with the U.S. National Committee on Theoretical and Applied Mechanics. The Society is also a member of the International Committee on Rheology, which organizes the International Congress on Rheology, held every four years.