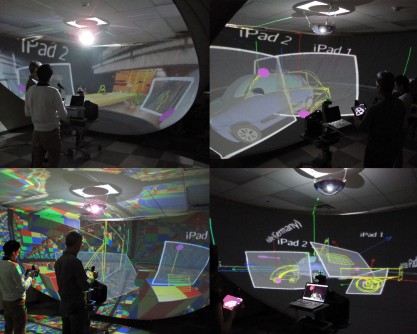 Newswise — Collaborative three-dimensional sketching is now possible thanks to a system known as Hyve-3D that University of Montreal researchers are presenting today at the SIGGRAPH 2014 conference in Vancouver. “Hyve-3D is a new interface for 3D content creation via embodied and collaborative 3D sketching,” explained lead researcher Professor Tomás Dorta, of the university’s School of Design. “The system is a full scale immersive 3D environment. Users create drawings on hand-held tables. They can then use the tablets to manipulate the sketches to create a 3D design within the space”. For example, as the designers are immersed in their work, this could mean designing the outside of a car, and then actually getting into it to work on the interior detailing. Hyve-3D stands for “Hybrid Virtual Environment 3D”. Univalor, the university’s technology commercialization unit, is supporting the market launch of the system.

The 3D images are the result of an optical illusion created by a widescreen high-resolution projector, a specially designed 5m-diameter spherically concave fabric screen and a 16-inch dome mirror projecting the image onto the screen. The system is driven by a MacBook Pro laptop, a tracking system with two 3D sensors, and two iPad mini tablets. Each iPad is attached to a tracker. “The software takes care of all the networking, scene management, 3D graphics and projection, and also couples the sensors input and iPad devices,” Dorta explains. “The iPads run a Satellite application, which serves as the user interaction front-end of the system. Specialized techniques render the 3D scene onto a spherical projection in real-time”. The Hyve-3D software also works on conventional 2D displays.

Up until now, 3D design required complicated or expensive equipment. “Our system is innovative, non-intrusive and simple,” Dorta said. “Beyond its obvious artistic applications, Hyve-3D clearly has industrial applications in a wide range of fields, from industrial or architectural design to engineering, medical 3D applications, game design animation and movie making. My team is looking forward to taking the product to market and discovering what people do with it.”

Notes:Tomás Dorta is available for interview in English, French and Spanish. The University of Montreal is officially known as Université de Montréal.