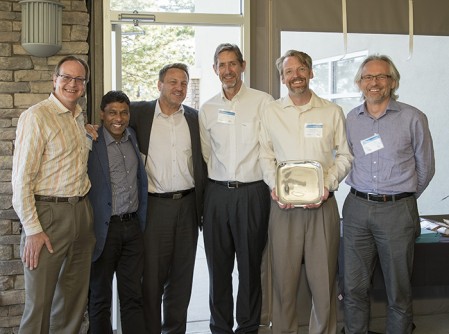 Newswise — LOS ALAMOS, N.M., July 25, 2017—Quantum-cybersecurity expert Ray Newell received the 2016 Richard P. Feynman Innovation Prize at a July 20 ceremony celebrating the “Super Power of the Entrepreneur.” Los Alamos National Laboratory researchers Miles Beaux and Nataliia Makedonska, and post-doctoral researchers Jessica Kubicek-Sutherland and Vamshi Chillara were also recognized for their exceptional research presentations at DisrupTech, an event that brings together investors, business leaders and others in the community to learn about disruptive technologies—those technologies that could potentially up-end the way we live and work—being developed at Los Alamos.

“Increasingly, disruptive technology change is driven by entrepreneurs and corporations,” said Duncan McBranch, chief technology officer at Los Alamos. “They are tackling problems once limited to superpower nations—like global public health and space exploration. When the Laboratory collaborates with the private sector, we can combine our transformative technologies with new business models to change the world. The Feynman Innovation Prize and DisrupTech were created to celebrate our scientists’ role in creating technologies that can help further the Laboratory’s mission while simultaneously making the world a better place.”

Newell, a Los Alamos National Laboratory scientist who led the development and commercialization of a successful quantum optics cybersecurity product, received the 2016 Richard P. Feynman Innovation Prize. As the leader of the Laboratory’s quantum communications team, he played a special role in translating Los Alamos’ quantum encryption technology into a commercial cybersecurity product. Using a phenomenon of light known as photon bunching, Newell and his team developed the Entropy Engineä, which generates an almost perfectly random, digitized signal—providing an ultra-high-speed stream of random numbers. The Entropy Engineä possesses the fundamental randomness and true unpredictability provided by quantum mechanics. The technology was licensed to Whitewood Security in 2014. The commercial success of the product has resulted in new U.S. government funding, fueling future capabilities in quantum encryption.

“In an organization filled with technical innovators, Ray stands out for his ability to get technology out of the laboratory and into the marketplace to serve the nation,” said McBranch.

Among the staff scientists, Beaux received the “Best Pitch” award for his presentation about air-buoyant solids as a way to bring internet access to remote locations all around the world. His technology uses ultra-low-density solid materials to create balloons that require no helium or other gas to float—so they could be easily and affordably deployed in hard-to-reach places.

Makedonska’s proposal to expand the use of an existing computational suite—dfnWorks—that simulates and predicts the flow and transport of fluids through underground fracture networks was recognized as “Most Fundable.” This award, which includes $10,000 in internal technology maturation funds, is chosen based on the potential to improve the technology with additional development.

Among the post-doctoral researchers, Kubicek-Sutherland won “Best Pitch” for her presentation about developing an efficient, affordable universal bacteria biosensor, while Chillara’s proposal to use ultrasound to power medical implants was awarded “Most Fundable.”