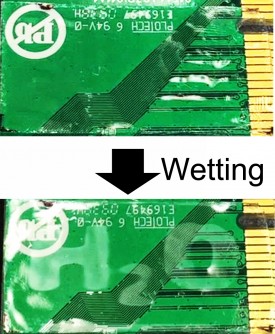 A coating on a circuit board is unobservable when dry (top) but wrinkles to display “H2O” when exposed to moisture (bottom).

EMBARGOED FOR RELEASE: Sunday, Aug. 21, 2016, 5 a.m. Eastern Time Note to journalists: Please report that this research will be presented at a meeting of the American Chemical Society. A press conference on this topic will be held Monday, Aug. 22, at 1 p.m. Eastern time in the Pennsylvania Convention Center. Reporters may check in at Room 307 in person, or watch live on YouTube http://bit.ly/ACSlivephiladelphia. To ask questions online, sign in with a Google account.

Newswise — PHILADELPHIA, Aug. 21, 2016 — What do squid and jellyfish skin have in common with human skin? All three have inspired a team of chemists to create materials that change color or texture in response to variations in their surroundings. These materials could be used for encrypting secret messages, creating anti-glare surfaces, or detecting moisture or damage, they say.

“Our experimental materials use cracks, folds or wrinkles to mimic the surface engineering of skin,” says Luyi Sun, Ph.D., who heads the research. “These new materials are unique because they change color or transparency when they’re stretched or exposed to moisture.”

Human fingers wrinkle when they’ve been submerged in water for a while. But jellyfish skin can also wrinkle, Sun’s graduate student Songshan Zeng says. “When they’re scared, some types of jellyfish form a wrinkled surface that is opaque and warns off predators,” says Zeng, who has a leading role in the project. “That same surface is transparent when it’s flat.” Even more impressive is the reaction of a squid when it is startled: Muscles in its skin contract, exposing colored pigments that serve as camouflage.

Sun’s team and their collaborator, Dianyun Zhang, Ph.D., who are all at the University of Connecticut, studied these three types of skin to determine how surface engineering alters their properties in response to changes in the environment. The researchers replicated the wrinkled surfaces by placing a rigid thin film of polyvinyl alcohol on a rubbery base of polydimethylsiloxane (PDMS). “Like finger skin, whenever part of the film is exposed to moisture, it swells slightly, generating wrinkles,” Sun says. Because the wrinkled part of the film is opaque, it can be used to form patterns — such as letters — that appear when the film is moistened. Sun notes that his is one of very few teams studying the dynamics of moisture-induced wrinkles, including how long they last and how to reverse them.

The presence and degree of crosslinking between polymer chains in the thin film dictates whether the wrinkling is reversible. On the one hand, if the film is formulated without crosslinking, wrinkles can be generated by moisture and subsequently smoothed out, but they cannot form again. This would be useful for displaying a message and then permanently erasing it once it’s read — a feature that James Bond would appreciate, Zeng notes. On the other hand, if the film has a certain type of crosslinking, wrinkles generated by moisture can never be erased. Thus, a small label incorporating the technology could go inside a cell phone (or on any circuit board). If the phone fell into a toilet, permanent wrinkles would form on the label in any desired shape (such as the chemical formula for water, “H2O”). This would be a dead give-away to a vendor that a customer had voided the warranty.

The researchers are also working on another cell phone application for wrinkled materials. Because wrinkles scatter light rays in multiple directions, rather than reflecting them directly back at a viewer, a different formulation of the material could make a cheap and effective anti-glare screen for phones, the researchers note.

In a separate project, Sun’s group mimicked squid skin by creating a PDMS base layer containing a small amount of fluorescent dye and coating it with a rigid thin film of polyvinyl alcohol/clay composite. The clay makes the surface layer prone to developing a multitude of tiny cracks and folds. Stretching the material opens the folds and cracks on the originally smooth surface, altering its topography and appearance. Depending on the formulation, the film can reversibly change color, luminesce or go from clear to opaque. One potential application is a smart window containing a clear material that could be stretched slightly so it turns opaque to provide privacy. The team is the first to make these types of materials, Sun says.

Sun acknowledges funding from the University of Connecticut and General Electric.

Abstract In nature, some marine organisms, such as Vogtia and Cephalopods, have evolved to possess camouflage traits by dynamically and reversibly altering their transparency, fluorescence, and coloration via muscle controlled surface structures and morphologies. To mimic this display tactics, we designed similar deformation controlled surface engineering via strain-dependent cracks and folds to realize four types of novel mechanochromic devices: (1) transparency change mechanochromism (TCM), (2) luminescent mechanochromism (LM), (3) color alteration mechanochromism (CAM), and (4) encryption mechanochromism (EM), based on a simple bilayer system containing a rigid thin film and a soft substrate. These devices exhibit a wide scope of mechanochromic response with excellent sensitivity and reversibility. The TCM device can reversibly and instantly switch between transparent and opaque state upon stretching and releasing. The LM can emit intensive fluorescence as stretched with an ultrahigh strain sensitivity in comparison to strain sensors based on electrical resistance change. The CAM can turn fluorescent color from green to yellow to orange as stretched within 20% strain. The EM device can reversibly reveal and conceal any desirable patterns. These novel devices are promising for applications in smart windows, dynamic optical switches, strain sensors, encryption, etc.