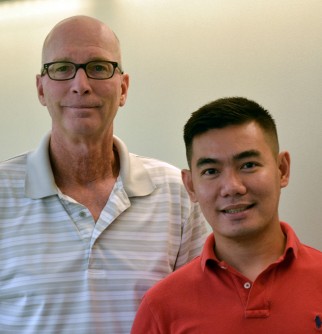 Newswise — LA JOLLA, CA—September 16, 2016—Scientists at The Scripps Research Institute (TSRI) have discovered a potential new weapon against Clostridium difficile, a bacterium that causes hundreds of thousands of severe intestinal infections in the U.S. every year and is frequently fatal.

The researchers found that several members of a class of existing anti-worm drugs known as salicylanilides are effective against a broad selection of C. difficile strains, including epidemic “hypervirulent” strains that frequently recur despite standard antibiotic treatment. The drugs kill even the non-growing, toxin-producing C. difficile cells that resist standard antibiotic therapies.

“These salicylanilide compounds have all the right features, and they’ve long been used in animals, so I think they can be quickly repurposed against C. difficile infections in people,” said senior author Kim D. Janda, the Ely R. Callaway, Jr. Professor of Chemistry, Director of the Worm Institute for Research & Medicine (WIRM) and member of The Skaggs Institute for Chemical Biology at TSRI.

As part of the study, Janda and first author Major Gooyit, a research associate in the Janda laboratory, created new salicylanilides with improved anti-C. difficile properties. They now plan to license one of these compounds to a pharmaceutical company for further development into a new drug.

The study, published online before print in Scientific Reports on September 16, 2016, comes as C. difficile continues to be a major public health threat. The U.S. Centers for Disease Control and Prevention estimates that in 2011—the most recent year for which they have made such an analysis—C. difficile caused more than 450,000 infections in the U.S. and nearly 30,000 deaths.

C. difficile infections usually arise as a side effect of long-term therapy with broad-spectrum antibiotics, which can kill competing “good” bacteria in the gut. C. difficile may be already resident in the gut or it may get there after a patient touches a contaminated surface—in a hospital, for example—and ingests the microbe. The absence of other gut bacteria species allows toxigenic C. difficile to proliferate relatively unchecked.

Existing therapies for C. difficile infections include the older antibiotics metronidazole and vancomycin, as well as the relatively new fidaxomicin. But even with a full course of fidaxomicin therapy, one in seven patients experiences a recurrent infection—and the recurrence rate rises to one in four for the most common hypervirulent strain of the bacterium, known as the BI/NAP1/027 strain.

Janda’s interest in finding better drugs against C. difficile was prompted recently by his own difficult bout with it. “It definitely gave me an incentive,” he said.

However, the subsequent discovery of the salicylanilides’ power against the deadly bacterium was largely serendipitous. “We started looking at other compounds for their effects on C. difficile and happened to be using a salicylanilide called closantel as a control,” said Janda. Closantel (Flukiver) is a veterinary drug, commonly used for deworming cattle, sheep and goats.

After noting closantel’s surprising effectiveness, Gooyit and Janda began testing it and three other salicylanilides—rafoxanide, niclosamide and oxyclozanide—against a variety of lab-dish-cultured strains of C. difficile. “We found that these salicylanilides inhibited the growth of a broad selection of strains, including the BI/NAP1/027 strain, with similar and sometimes greater in vitro activity than metronidazole’s and vancomycin’s,” said Gooyit.

Rafoxanide and oxyclozanide, like closantel, are FDA-approved only for veterinary use, but niclosamide is also approved for treating tapeworm infections in humans.

In further experiments, Gooyit and Janda found that the two best-performing salicylanilides, closantel and rafoxanide, maintained their effectiveness against non-growing, “stationary-phase” cells of C. difficile. By contrast, metronidazole and vancomycin—generally considered growth-inhibitors rather than outright killers of C. difficile—had little effect on stationary-phase cells.

Stationary-phase cells are important targets for C. difficile therapy because they are the main producers of the protein toxins that damage the gut wall and induce inflammation in C. difficile infections—and in hypervirulent strains often do so severely enough to kill the patient or necessitate surgical removal of the inflamed colon. Stationary-phase cells also produce the hardy, seed-like, bacterial “spores” of C. difficile that can survive for long periods on surfaces such as toilets or washbasins and account for the microbe’s high transmission rates in hospitals.

As C. difficile-killers, the salicylanilides have a further desirable property: When taken orally, in pill form, they are not well absorbed into the bloodstream; thus they stay in the gut where they are needed, which helps maximize their potency and minimize side effects elsewhere.

Examining C. difficile strains that had been exposed to salicylanilide for long periods, Gooyit and Janda saw no evidence that the bacteria evolved significant resistance to the drugs. They also found with lab-dish experiments that the salicylanilides had minimal impact on “good” gut bacteria.

How do the salicylanilides manage to kill C. difficile cells so effectively? Prior studies suggested that these compounds can alter the electrical properties of bacterial cell membranes—thereby disrupting processes that are essential for survival, even in non-growing cells. Gooyit and Janda made new salicylanilide compounds with structures designed to enhance this membrane-targeting effect, finding that the new compounds have significantly improved properties against C. difficile strains including stationary-phase cells.

Janda added that negotiations are under way to license the salicylanilides to a pharmaceutical company for further development as a C. difficile therapy.