S&T-Funded Tools Help Get Ahead of Storms 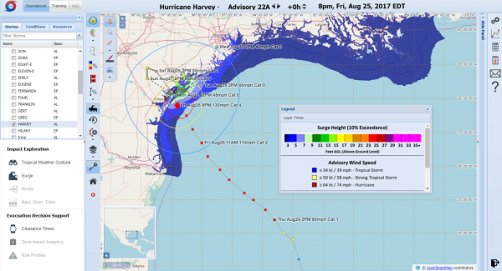 Newswise — Hurricane Harvey started out as a tropical wave from the coast of Africa in early August. After weakening while traveling between Africa and Mexico's Yucatan Peninsula, Harvey entered the Gulf of Mexico on August 23 and reorganized into a tropical depression. In just 56 hours, Harvey grew into a Category 4 hurricane. On August 25, 2017, Hurricane Harvey made landfall with winds of 130 mph near Rockport, Texas, and over the ensuing days produced over 50 inches of rain inland.

With such an unprecedented storm barreling towards them, emergency managers wanted, needed, and used every tool at their disposal to make critical decisions on evacuations, preparedness, and response. One of those tools was the Department of Homeland Security’s (DHS) Science and Technology Directorate (S&T) Hurricane Evacuation (HURREVAC) extended (HV-X) platform.

The HV-X platform integrates forecast and planning data to provide emergency managers with decision support tools for use in advance of and during tropical weather. Development began in 2013 and, since then, S&T has identified the need for a comprehensive hurricane decision platform that encompasses all phases of planning and evacuations. Collaborating with FEMA via the National Hurricane Program (NHP) Technology Modernization initiative, DHS S&T worked to streamline the currently available HURREVAC storm tracking and decision platform. The result of this collaboration is HV-X.

The deployed development team supported HV-X use, monitored functionality, and answered questions both from users in Texas and at FEMA headquarters. In addition, developers added or modified products as desired by FEMA for Hurricane Harvey.

“It was a stress test of sorts in the sense we expected some heavy usage from our test group of users inside and outside of Texas,” said S&T Program Manager Darren Wilson. “FEMA HQ and Regional National Hurricane Program Management reported the test version of HV-X that was up and running performed well leading up to and throughout Hurricane Harvey.”

The HV-X team remained at the NRCC through September 1 to support response efforts and the planning for Hurricane Irma. During this time, new prototype capabilities were added for visualization of power outage data and off shore precipitation, as well as meal and shelter planning.

The HV-X development team was able to dynamically respond to FEMA’s needs by making developmental capabilities available to emergency managers, FEMA HQ and regional stakeholders. The developers of HV-X at MIT-LL added an experimental cyber-based power sensing map. This feature allows emergency managers to monitor power outages in areas of interest by comparing the current Internet connectivity to a baseline during normal usage. This power outage function on HV-X allows managers to see town by town how the power grid is being affected. HV-X helps track initial damage and how the power network is recovering. Additional areas of research being pursued include monitoring the availability of critical services in an impacted region.

HV-X is finalizing the development of the shelter and meal planning features, which will enable emergency workers to coordinate the demand of evacuees requiring food and shelter. Local planning for feeding and sheltering supplies and logistics could take place before, during and after a disaster, such as a hurricane or an earthquake. Once fully operational, the capability will eliminate the need for the manual spreadsheets currently used.

As envisioned, if a hurricane is approaching a certain area, the local mass care coordinator will use tools within HV-X to estimate the number and demographics of people to be affected by the hurricane. The system will then automatically estimate the number of shelters and food supplies needed per day over the course of several weeks. Food and sheltering stakeholders can view these demands and provide input to local and state officials. Officials can then make real time adjustments to their operations and requests for federal assistance.

"HV-X will be successful in real operations across hurricane-prone regions because DHS S&T listened to what emergency managers needed, first and foremost,” said FEMA Director of Planning and Exercises, Response Directorate Josh Dozor. “This program has capitalized on subject matter expertise and created a platform that will help our operators make the difficult decisions needed to save lives.”

Further development of HV-X includes adding the capability to do evacuation zone-based analytics on both past and forecasted rainfall estimates, post-storm assessment (PSA) tools that would allow FEMA regions to send out PSA surveys to impacted counties/states to gather information for the PSA reports, and specialized report generation to streamline and standardize PSA reporting nationwide.