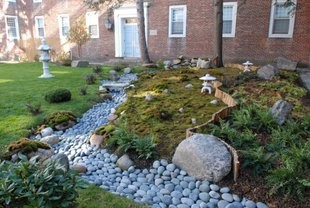 A portion of the Japanese-style Zen garden at St. Lawrence University in Canton, New York. 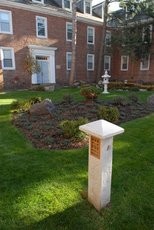 Newswise — A Japanese-style garden has been constructed on the St. Lawrence University campus, to serve as a learning laboratory and a place for quiet reflection.

Located in the inner courtyard area of Sykes Residence Hall, the garden is called "Kitagunitei," which means "the North Country garden." It was built this year, and is based on a design made by several students who visited Zen gardens in Kyoto, Japan, in the summer of 2006 as part of a class project and research grant.

The garden has four quadrants, including a traditional dry landscape garden like the type that would be found at a Zen temple; a "strolling garden"; a dry stream; and a moss garden.

It is intended for use as a "living classroom," for the humanities and the sciences. The rocks were selected for their relevance to the geological sciences; the mosses and other plants are of interest to biologists; and the garden itself is used by philosophy, religious studies and other academic departments and programs to learn about East Asian aesthetics.

In addition, the garden has symbolic association with the North Country and the Adirondacks, as many of the plantings and rocks come from local sources.

A dedication is being planned for the spring of 2009.