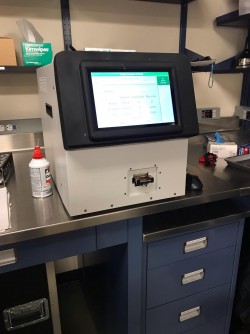 Newswise — Explosive materials pose a threat whether they are used by domestic bad actors or in a theater of war and staying ahead of our adversaries is a job that the Departments of Homeland Security and Defense share. Our research and development work is no different.

Most recently, the Department of Homeland Security (DHS) Science and Technology Directorate (S&T) transitioned technology to the Defense Advanced Research Projects Agency (DARPA) that is representative of S&T’s deep body of work in cataloging, detecting and thwarting explosive threats. Now this body of work will help keep our warfighters and our nation safe from weapons of mass destruction (WMD) threats.

The technology—a Next-Generation Mass Spectrometry Explosive Trace Detector (Next-Gen Mass Spec ETD)—was developed due to emerging explosive threats and evolving tactics by terrorists to evade detection. For the past decade, S&T has made it a top priority to equip and enhance DHS security personnel with next-generation capabilities that can rapidly identify and defeat these threats.

For example, we all know that explosive threats are a major concern in aviation security. They are the reason we remove our shoes as we go through airport checkpoints and why the Transportation Security Administration (TSA) scans every piece of luggage and cargo before loading them onto planes. The sheer variety of explosive materials, the many vehicles for deploying them, and the increasing tactics used to avoid detection pose a tremendous risk not only to American (and global) aviation, but across the entire homeland security enterprise.

S&T has been working not only with TSA, but also U.S. Customs and Border Protection and the U.S. Secret Service, to develop Next-Gen Mass Spec ETD capabilities for use at aviation checkpoints, border crossings, and other security operations across the country.

The program team realized that this technology could easily be modified to meet a pressing DARPA need as well. “The original intent of developing this Next-Gen Mass Spec ETD technology was to give Transportation Security Officers (TSOs) an alarm resolution tool that identifies, confirms and defeats current and emerging explosive threats,” said S&T Program Manager Michael Palamar.

Many of us may have experienced being swabbed at airport checkpoints in a procedure called alarm resolution screening. TSOs use ETDs to determine whether harmful substances are present on cargo or the passengers transporting it—they use a sampling coupon to swab a piece of carry-on or checked baggage or a passenger’s hands, place the coupon inside an ETD unit, and then analyze it for the presence of potential explosive residues.

Palamar continued, “We were surprised and pleased to find out that this same technology is equally adaptable for enhancing warfighters’ capabilities to detect biological and WMD threats.”

DARPA's SIGMA+ program is tasked with detecting illicit materials via highly-capable sensors and networks that alert authorities to chemical, biological, radiological, nuclear and explosives threats. They were looking to deploy chemical sensors that not only will provide early warning of WMDs, but that could also be scalable to cover a major metropolitan city and its surrounding region. A high-resolution and high-sensitivity mass spec technology that has been ruggedized for field operations was a logical choice for the SIGMA+ program.

S&T’s years of taking ETD technology to the next level resulted in the Next-Gen Mass Spec ETD that will help DARPA meet its capability need. Key features of S&T’s system include:

The technology underwent two rounds of developmental testing and evaluation at S&T’s Transportation Security Laboratory and one round of testing at TSA’s Systems Integration Facility. It is also undergoing ruggedization for uses in air cargo facilities. In each of these testing and evaluation events, the technology showed proven capabilities in detecting and identifying emergent explosive threats.

Now, with some modification, this critical, cutting-edge technology has been reconfigured for DARPA to use as an air-breathing sensor for early WMD warning.

“DARPA's SIGMA+ program has a requirement to deploy highly-capable chemical sensors as part of a mobile sensor architecture to provide WMD early warning,” noted DARPA Program Manager Dr. Mark Wrobel. “S&T's development of an air-sampling variant of Bruker's compact triple-quadrupole mass spectrometer has provided a capability for SIGMA+ that would otherwise not have existed.”

Leveraging S&T’s Next-Gen Mass Spec ETD engine, DARPA integrates it with an air-breathing front end for sampling air and detecting chemical and explosive trace vapors and their pre-cursors in metropolitan environments. The high sensitivity of the detection engine is instrumental in giving DARPA a real-time detection capability against WMD, and the upgradable threat library and compressed library upgrade cycles play a key role in enabling the communications of WMD threats to responsible authorities—thus enhancing national security.

Thoi Nguyen, a contract scientist supporting S&T’s development and analysis of the Next-Gen Mass Spec ETD for the last five years, seconded Dr. Wrobel’s comment. “S&T tested and evaluated several other mass spec technologies for explosives detection. This technology came out on top both in high- probability of detection and low probability of false alarm.”

S&T’s work on Next-Gen Mass Spec ETD technology continues with TSA and other DHS agencies, but it is always a proud moment when a new use case is not only identified but put into operational practice.

Commenting on this fruitful collaboration, S&T’s Dr. Laura Parker said: “It is a credit to the progress and impact of this next-generation ETD technology that S&T was able to collaborate with DARPA and share this technology. As government program managers, we are committed to using taxpayers’ money more efficiently, and this technology transition is a win-win.”