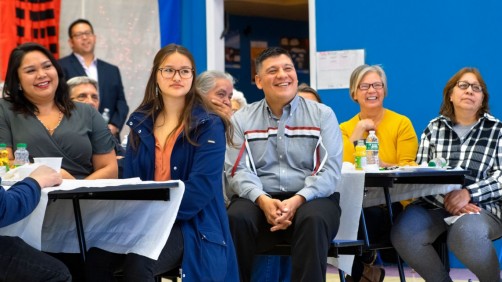 Tsiorasa Barreiro ’00, center, surrounded by family and community members of the St. Regis Mohawk Tribe, laughs while listening to remarks at the ceremony honoring him with the Cornell New York State Hometown Alumni Award Oct. 27.

Media Note: Images of Tsiorasa Barreiro and from the event can be viewed and downloaded here: https://cornell.box.com/v/BarreiroHometownAlumniAward.

The ceremony drew on historical connections between Cornell University and Native Americans in New York state as Barreiro’s extended family community gathered together. Barreiro’s many connections demonstrated how the tribe’s “full circle” concept aligns with the qualities the award celebrates: that students bring their educational experiences, skills and abilities with them as they return home to benefit their communities.

The Saint Regis Mohawk Tribe operates community programs in education, health services, the environment, economic development and human services. All division directors report to Barreiro. The tribe has about 15,000 members, nearly 10,000 of whom live within the 21-square-mile territory that sits on the border of Canada and the United States along the St. Lawrence River. Dozens of Akwesasne students have attended Cornell over the decades.

Barreiro, who earned his bachelor’s degree in communication from the College of Agriculture and Life Sciences, minored in Native American studies and was president of Native American Students at Cornell.

After graduation, Barreiro worked for Cornell’s American Indian Program and served as the residence hall director of Akwe:kon on North Campus. He became vice president of the fifth-largest Native American-owned company in the U.S., Ongweoweh Corp. in Ithaca, before moving north to Akwesasne about five years ago.

Joel Malina, Cornell vice president for university relations, noted at the ceremony that Barreiro told him Cornell “exposed him to new ideas and cultivated a simultaneous appreciation for the immensity and interconnectedness of our world.”

At Akwesasne, Barreiro, who comes from a long line of tribal leaders, is active as a youth sports coach and mentor. As executive director, he has been instrumental in helping plan and complete projects and venues for the community, from new buildings and sidewalks to park expansions and venues for programming to help children and teens make positive life choices.

Barreiro “is exactly the person we seek to honor with our Hometown Alumni Award,” Malina said.

“The people I love most are here in this room,” Barreiro said, “and that really means a lot.” The award from Cornell is an honor, he noted. “Cornell has played a large role in my life and my family’s life. It’s not just four years at school; it’s our family experience – moving to Ithaca and experiencing everything we did there.”

From ages 9 to 15, Barreiro grew up in Ithaca, immersed in the Native American community at Cornell through his parents. “It was really great to see these pioneering projects and the engagement with the communities take place, and that’s something I hope we always continue at Cornell, because of that relationship with our Indian communities in New York state,” he said.

The Cornell University New York State Hometown Alumni Award recognizes Cornell graduates who return to their home counties or regions to start or enhance a business or nonprofit, and who regularly volunteer and are making an impact in those communities.