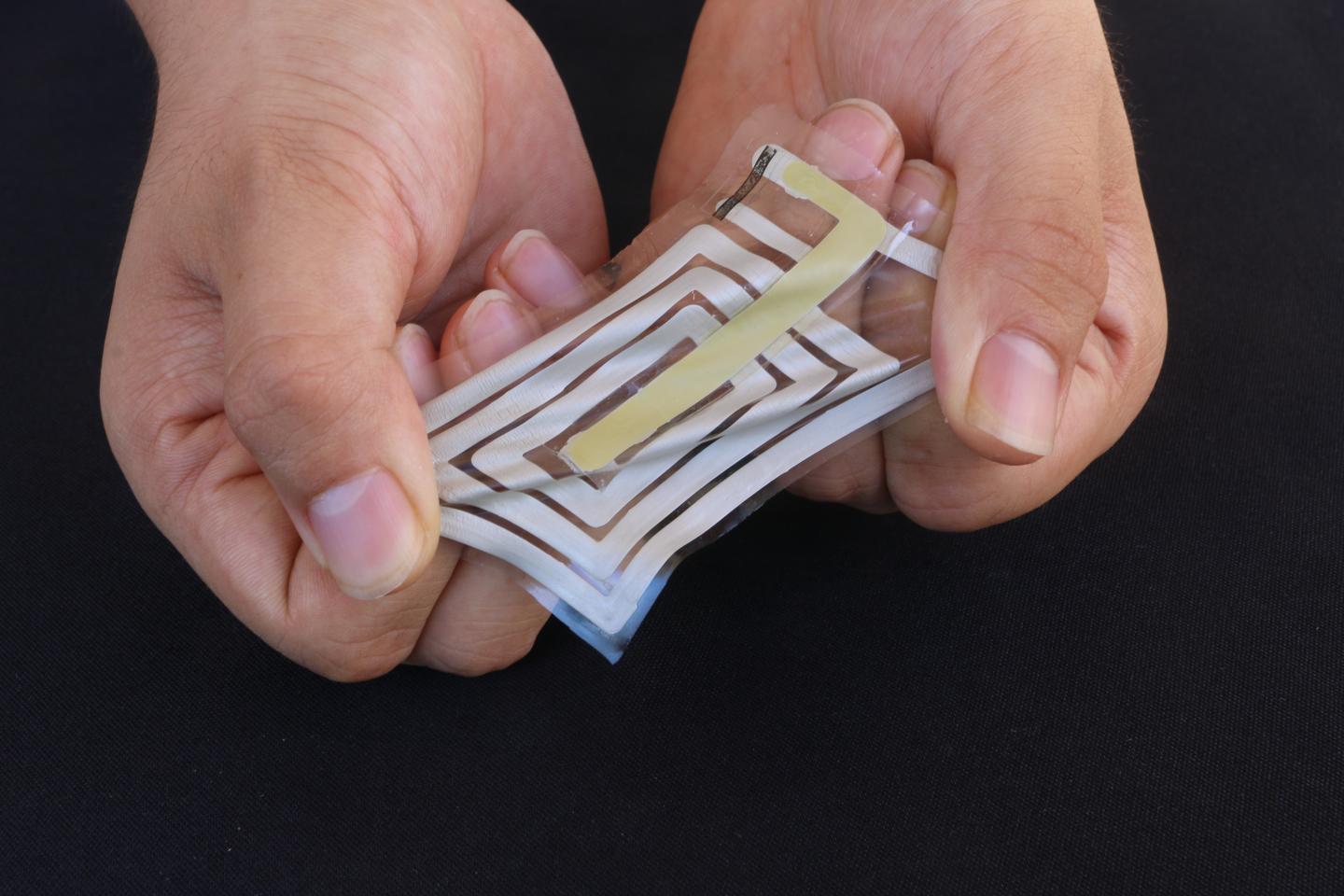 Using metallic ink, researchers screen-print an antenna and sensor onto a stretchable sticker designed to adhere to skin and track pulse and other health indicators, and beam these readings to a receiver on a person's clothing.

Newswise — We tend to take our skin's protective function for granted, ignoring its other roles in signaling subtleties like a fluttering heart or a flush of embarrassment.

Now, Stanford engineers have developed a way to detect physiological signals emanating from the skin with sensors that stick like band-aids and beam wireless readings to a receiver clipped onto clothing.

To demonstrate this wearable technology, the researchers stuck sensors to the wrist and abdomen of one test subject to monitor the person's pulse and respiration by detecting how their skin stretched and contracted with each heartbeat or breath. Likewise, stickers on the person's elbows and knees tracked arm and leg motions by gauging the minute tightening or relaxation of the skin each time the corresponding muscle flexed.

Zhenan Bao, the chemical engineering professor whose lab described the system in an Aug. 15 article in Nature Electronics, thinks this wearable technology, which they call BodyNet, will first be used in medical settings such as monitoring patients with sleep disorders or heart conditions. Her lab is already trying to develop new stickers to sense sweat and other secretions to track variables such as body temperature and stress. Her ultimate goal is to create an array of wireless sensors that stick to the skin and work in conjunction with smart clothing to more accurately track a wider variety of health indicators than the smart phones or watches consumers use today.

"We think one day it will be possible to create a full-body skin-sensor array to collect physiological data without interfering with a person's normal behavior," said Bao, who is also the K.K. Lee Professor in the School of Engineering.

Postdoctoral scholars Simiao Niu and Naoji Matsuhisa led the 14-person team that spent three years designing the sensors. Their goal was to develop a technology that would be comfortable to wear and have no batteries or rigid circuits to prevent the stickers from stretching and contracting with the skin.

Their eventual design met these parameters with a variation of the RFID - radiofrequency identification - technology used to control keyless entry to locked rooms. When a person holds an ID card up to an RFID receiver, an antenna in the ID card harvests a tiny bit of RFID energy from the receiver and uses this to generate a code that it then beams back to the receiver.

The BodyNet sticker is similar to the ID card: It has an antenna that harvests a bit of the incoming RFID energy from a receiver on the clothing to power its sensors. It then takes readings from the skin and beams them back to the nearby receiver.

But to make the wireless sticker work, the researchers had to create an antenna that could stretch and bend like skin. They did this by screen-printing metallic ink on a rubber sticker. However, whenever the antenna bent or stretched, those movements made its signal too weak and unstable to be useful.

To get around this problem, the Stanford researchers developed a new type of RFID system that could beam strong and accurate signals to the receiver despite constant fluctuations. The battery-powered receiver then uses Bluetooth to periodically upload data from the stickers to a smartphone, computer or other permanent storage system.

The initial version of the stickers relied on tiny motion sensors to take respiration and pulse readings. The researchers are now studying how to integrate sweat, temperature and other sensors into their antenna systems.

To move their technology beyond clinical applications and into consumer-friendly devices, the researchers need to overcome another challenge - keeping the sensor and receiver close to each other. In their experiments, the researchers clipped a receiver on clothing just above each sensor. One-to-one pairings of sensors and receivers would be fine in medical monitoring, but to create a BodyNet that someone could wear while exercising, antennas would have to be woven into clothing to receive and transmit signals no matter where a person sticks a sensor.

This research was supported by Samsung Electronics; the Singapore Agency for Science, Technology and Research; the Japan Society for the Promotion of Science; and the Stanford Precision Health and Integrated Diagnosis Center