Stanford nuclear policy experts say that economic sanctions alone might not be enough to curtail the country's nuclear program. 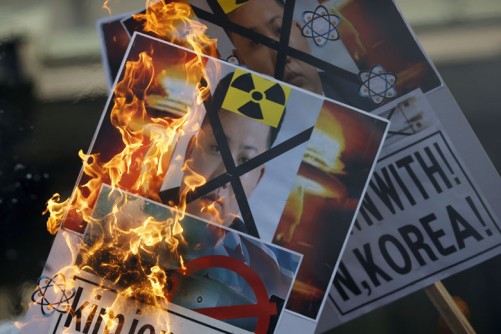 Stanford nuclear policy experts say North Korea's recent bomb test was an important step forward for its nuclear program and would have a destabilizing effect on the entire region.

Newswise — Stanford nuclear policy experts say North Korea's recent bomb test was an important step forward for its nuclear program and would have a destabilizing effect on the entire region. (Photo: Reuters/Kim Hong-Ji)

Stanford nuclear experts said they were skeptical of North Korea's claim that it had detonated a hydrogen bomb this week.

However, they said the test was an important step forward for North Korea's nuclear program and would have a destabilizing effect on the entire region.

"I don't believe it was a real hydrogen bomb, but my greatest concern is not so much whether or not they actually tested a hydrogen bomb, but rather that they tested at all," said Siegfried Hecker, former director of Los Alamos National Laboratory and senior fellow at Stanford's Center for International Security and Cooperation.

"The propaganda machine in North Korea has made all sorts of claims about Kim Jong-un's personal prowess and his history, and it is totally unsurprising that he might make exaggerated claims about North Korea's military prowess," Sagan said.

"Whether it's a hydrogen bomb or not, it's a very dangerous, destabilizing development," said Perry, who is the Michael and Barbara Berberian Professor, Emeritus, at Stanford's Freeman Spogli Institute for International Studies and at the School of Engineering. "It's obvious they're working to increase the capability and size of their nuclear arsenal, and that represents a huge danger to the region and creates major instability and major concerns on the part of South Korea and Japan."

Many North Korea watchers had been anticipating another nuclear test.

"We've thought that the North Koreans could test at any time – that the tunnels were ready – so it would be a political decision, not a technical decision," said Thomas Fingar, senior fellow at the Freeman Spogli Institute for International Studies.

Hecker said North Korea's latest nuclear test would move the country closer to being able to miniaturize a nuclear warhead and mount it on a missile, extending the reach of their nuclear weapons.

"They will have achieved greater sophistication in their bomb design – that is the most worrisome aspect," Hecker said. "At this point, what makes their nuclear arsenal more dangerous is not so much explosive power of the bomb, but its size, weight and the ability to deliver it with missiles."Need for renewing negotiations

On the diplomatic agenda, the United States and its allies will likely push for stronger sanctions in the wake of the tests, according to Kathleen Stephens, a former U.S. ambassador to the Republic of Korea and the William J. Perry Fellow at the Walter H. Shorenstein Asia-Pacific Research Center (APARC).

"In the U.N., the U.S., Japan and South Korea will likely look for another, and stronger, U.N. Security Council resolution, presumably with some efforts to attach to it some teeth and strengthen sanctions," Stephens said.

The U.S. Congress is currently considering financial sanctions that would cut off all access to U.S. banks for any banks dealing with the North Koreans.

But financial sanctions would likely be less effective in dealing with North Korea than they had been with Iran, according to Fingar.

"North Korea is relatively insulated from the external economy, where Iran wasn't. Iran had a middle class – you could make sanctions hurt, they could have a real effect. You could make it hard for the North Koreans to buy luxury goods, but at the end of the day, is that going to bring down the regime?"

Financial sanctions against North Korea could have the unintended consequence of also hurting China, said David Straub, associate director of the Korea program at APARC.

"This could be problematic for China because many of the transactions that North Korea conducts would be going thorough Chinese banks, and the Chinese, understandably, might not be happy about the U.S. financial sanctions on them, in effect," Straub said.

Perry recommended that the U.S. reinvigorate diplomatic talks with North Korea in collaboration with China, South Korea, Japan and Russia.

"I would not give up on negotiations with North Korea yet," Perry said.

"What could have been done many years ago was following through on negotiations with North Korea at the turn of the century that were proceeding robustly in the last years of Clinton's second term, but were abandoned by the Bush administration. That was a great mistake."

But Hecker said those negotiations would be harder now.

"I have previously argued that we should focus on three No's for three Yes's – that is, no more bombs, no better bombs [that is, no testing] and no export – in return for addressing the North's security concerns, its energy shortage and its economic woes," said Hecker.

"This could have worked when I first proposed it 2008 after one of my seven visits to North Korea. It will be more difficult now."