The study discovered a path from simple to complex compounds amid Earth’s prebiotic soup. More than 4 billion years ago, amino acids could have been attached together, forming peptides. These peptides ultimately may have led to the proteins and enzymes necessary for life’s biochemistry, as we know it.

“It was clear that the results from this old experiment weren’t some sort of artifact. They were real,” said Jeffrey Bada, distinguished professor of marine chemistry at the Scripps Institution of Oceanography at the UC San Diego. Bada was a former student and colleague of Miller’s.

The study was supported by the Center for Chemical Evolution at the Georgia Institute of Technology, which is jointly supported by the National Science Foundation and the NASA Astrobiology Program. The study was published online June 25 in the journal Angewandte Chemie International Edition. The work was primarily a collaboration between UC San Diego and the Georgia Institute of Technology in Atlanta. Eric Parker, the study’s lead author, was an undergraduate student in Bada’s laboratory and is now a graduate student at Georgia Tech.

Jeffrey Bada was Stanley Miller’s second graduate student. The two were close and collaborated throughout Miller’s career. After Miller suffered a severe stroke in 1999, Bada inherited boxes of experimental samples from Miller’s lab. While sorting through the boxes, Bada saw “electric discharge sample” in Miller’s handwriting on the outside of one box.

“I opened it up and inside were all these other little boxes,” Bada said. “I started looking at them, and realized they were from all his original experiments; the ones he did in 1953 that he wrote the famous paper in Science on, plus a whole assortment of others related to that. It’s something that should rightfully end up in the Smithsonian.”

The boxes of unanalyzed samples had been preserved and carefully marked, down to the page number where the experiment was described in Miller’s laboratory notebooks. The researchers verified that the contents of the box of samples were from an electric discharge experiment conducted with cyanamide in 1958 when Miller was at the Department of Biochemistry at the College of Physicians and Surgeons, Columbia University.An electric discharge experiment simulates early Earth conditions using relatively simple starting materials. The reaction is ignited by a spark, simulating lightning, which was likely very common on the early Earth.

The 1958 reaction samples were analyzed by Parker and his current mentor, Facundo M. Fernández, a professor in the School of Chemistry and Biochemistry at Georgia Tech. They conducted liquid chromatography- and mass spectrometry-based analyses and found that the reaction samples from 1958 contained peptides. Scientists from NASA’s Johnson Space Center and Goddard Space Flight Center were also involved in the analysis.

The research team then set out to replicate the experiment. Parker designed a way to do the experiment using modern equipment and confirmed that the reaction created peptides. “What we found were some of the same products of polymerization that we found in the original samples,” Parker said. “This corroborated the data that we collected from analyzing the original samples.”

In the experiment from 1958, Stanley Miller had the idea to use the organic compound cyanamide in the reaction. Scientists had previously thought that the reaction with cyanamide would work only in acidic conditions, which likely wasn’t widely available on early Earth. The new study showed that reactive intermediates produced during the synthesis of amino acids enhanced peptide formation under the basic conditions associated with the spark discharge experiment.

“What we’ve done is shown that you don’t need acid conditions; you just need to have the intermediates involved in amino acid synthesis there, which is very reasonable,” Bada said.

Why Miller added cyanamide to the reaction will probably never be known. Bada can only speculate. In 1958, Miller was at Columbia University in New York City. Researchers at both Columbia and the close-by Rockefeller Institute were at the center of studies on how to analyze and make peptides and proteins in the lab, which had been demonstrated for the first time in 1953 (the same year that Miller published his famous origin of life paper). Perhaps while having coffee with colleagues someone suggested that cyanamide – a chemical used in the production of pharmaceuticals – might have been available on the early Earth and might help make peptides if added to Miller’s reaction.

“Everybody who would have been there and could verify this is gone, so we’re just left to scratch our heads and say ‘how’d he get this idea before anyone else,’” Bada said.

The latest study is part of an ongoing analysis of Stanley Miller’s old experiments. In 2008, the research team found samples from 1953 that showed a much more efficient synthesis than Stanley published in Science in 1953. In 2011, the researchers analyzed a 1958 experiment that used hydrogen sulfide as a gas in the electric discharge experiment. The reactions produced a more diverse array of amino acids that had been synthesized in Miller’s famous 1953 study. Eric Parker was the lead author on the 2011 study.

“It’s been an amazing opportunity to work with a piece of scientific history,” Parker said.

This research is supported by the Center for Chemical Evolution at the Georgia Institute of Technology, which is jointly supported by the National Science Foundation and the NASA Astrobiology Program under award number NSF CHE-1004570. Any conclusions or opinions are those of the authors and do not necessarily represent the official views of the sponsoring agencies. 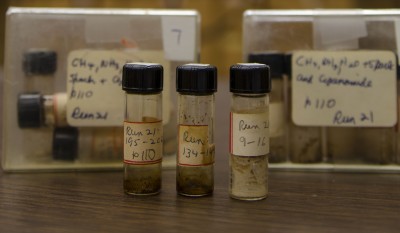 Caption: Vials contain samples of prebiotic materials created by Stanley Miller in 1958, labeled by Miller himself. Miller added a potential prebiotic condensation agent, cyanamide, during the course of the experiment. Cyanamide has been suggested to induce polymerization of amino acid into simple peptides which is an important set in chemical evolution and possibly the origin of life. For unknown reasons, Miller had never analyzed the samples. In a paper published in 2014, researchers at Georgia Tech and Scripps Institution of Oceanography at UC San Diego analyzed the samples and established the potential importance of reagents - substances that cause chemical reactions such as cyanamide - in the origin of life on Earth. 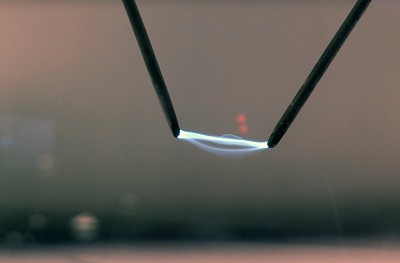 Caption: Close-up of the spark that simulates the energy provided by lightning on the early Earth.