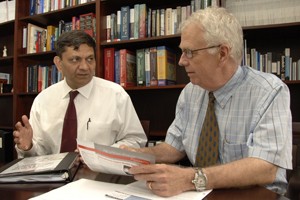 Drs. Madhukar Trivedi (left) and John Rush are beginning a national clinical trial to test the effectiveness of multiple-medication treatment of depression.

"We are trying two active, Food and Drug Administration-marketed antidepressant medicines available by prescription from your local drugstore," said Dr. John Rush, professor of clinical sciences and psychiatry, CO-MED's principal investigator and head of the national study. "There have never been studies prospectively in a large representative sample to see whether the combination of these pills will be better than one."

For diseases such as diabetes or hypertension, combining medicines from the start of treatment is common practice.

"The use of combination treatments right at the outset is comparable to similar approaches in a number of other chronic medical illnesses," said Dr. Madhukar Trivedi, professor of psychiatry and co-principal investigator.

STAR*D, also led by Drs. Rush and Trivedi, was the largest study ever on the treatment of major depressive disorder and is considered a benchmark in the field of depression research. The six-year, $33 million study initially included more than 4,000 patients from sites across the country.

STAR*D provided evidence for step-by-step guidelines to address treatment-resistant depression. Researchers found that only 33 percent of people go into remission in the first 12 weeks of treatment with an antidepressant medication, and of those, about 20 percent relapse. In the course of a year, remission rates for patients who reach the third and fourth treatment steps are even lower.

"While one out of three patients reaching remission is OK, it is not where we need to be," said Dr. Rush. "That raised the question of how to improve remission rates in the first step in the treatment of depression. How do doctors in the real world fix the problem? They use two drugs."

The 660 CO-MED study participants will come from the same 15 sites that participated in STAR*D. Participants will be treated randomly with one of two combinations of medications or a single drug.

"If we found a meaningful increase in remission rates with tolerable side affects for people with chronic or recurrent major depression in the first step, results should change practice," Dr. Rush said.

Dr. Trivedi said, "The major advantage with this approach is not only that we could achieve desired outcomes earlier, but also improve the prognosis in the long term.

"Depression is a serious medical illness that leads to more than 30,000 suicides a year in the U.S. alone," said Dr. Trivedi. "Depression also affects the sufferer's quality of life and costs the economy billions of dollars. If that is the case and we know that subsequent treatment steps do not lead to high symptom remission, should we not change the treatment paradigm so that we utilize logical treatment combinations earlier rather than later?"

CO-MED is funded by a National Institute of Mental Health grant.