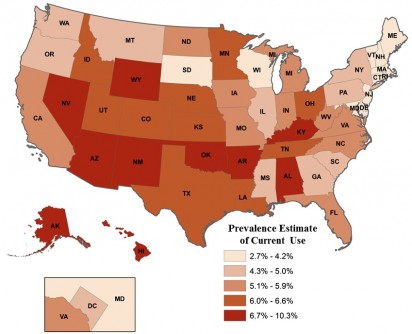 State-specific estimates of current e-cigarette use among U.S. adults from the National Adult Tobacco Survey, 2012–2014

Newswise — States with robust tobacco control policies and regulations, such as smoke free air laws and taxes on cigarettes, not only have fewer cigarette users but also fewer e-cigarette users, according to research from NYU School of Medicine and the NYU College of Global Public Health.

The findings, published in the journal Nicotine & Tobacco Research, suggest that existing state-level tobacco control measures likely influence e-cigarette use, despite their focus on traditional cigarettes.

“Our research adds to the understanding of the geographic and sociodemographic factors underlying e-cigarette use within the existing tobacco control environment,” said Omar El-Shahawy, MD, MPH, PhD, a postdoctoral fellow in the Department of Population Health at NYU School of Medicine and the study’s lead author.

Tobacco control efforts worldwide have slowed the epidemic of tobacco use by introducing a variety of policies and regulations, including smoke free air laws, cigarette taxes, and increasing the availability of smoking cessation medications and counseling. In the United States, for example, the American Heart Association and its partners have worked effectively to bring 66 percent of the population under coverage of smoke free air laws.

In recent years, the use of e-cigarettes has rapidly grown. The current study examined the association between e-cigarette and cigarette use and existing state-level tobacco control measures. To calculate and map the use of e-cigarettes and cigarettes, the researchers used 2012-2013 and 2013-2014 data from the National Adult Tobacco Survey, a telephone survey of more than 60,000 U.S. adults. They looked at the prevalence of smoking and vaping over respondents’ lifetimes, as well as their current use, and accounted for a variety of sociodemographic factors.

The researchers used the American Lung Association’s State of Tobacco Control reports published in 2013 and 2014 to evaluate state tobacco control policies and measures, which they then compared with state-specific smoking and vaping rates.

Of note, states with stronger implementation of tobacco control measures, including state-level funding for tobacco prevention and control programs that are recommended by the Centers of Disease Control and Prevention (CDC), had lower rates of both current cigarette and e-cigarette use.

The researchers point out that their study will be useful for monitoring the impact of future state and federal strategies and regulatory policies pertaining to e-cigarettes. E-cigarettes are believed to be less harmful than cigarettes since the combustion of conventional cigarettes releases most of the known elements linked to a variety of cancers; however, there is no long-term data about their safety.  While e-cigarettes are marketed as aides for smoking cessation, “whether e-cigarettes actually help people quit tobacco use completely is currently under scrutiny among the tobacco control community,” said study author Scott E. Sherman, MD, MPH, professor of population health at NYU School of Medicine and an affiliated faculty member at the NYU College of Global Public Health.

About the Department of Population Health at NYU School of Medicine

The Department of Population Health at NYU School of Medicine unites the fields of medicine and public health to improve the health of populations in New York City and around the globe and to educate students to become leaders in healthcare delivery, health policy, and public health. Partnering with colleagues at NYU Langone, NYU Lutheran, Bellevue Hospital, and other public and private sector organizations, the Department conducts applied research to improve the quality of the healthcare system and work with communities to prevent illness and disease. Trained in a diverse set of disciplines, the Department’s nearly 75 core faculty and 200 dedicated staff specialize in research areas including: epidemiology, biostatistics, health economics and policy, medical ethics, early childhood development, healthcare delivery, community health work, and tobacco, alcohol, and drug use and treatment. Its funders include the National Institutes of Health, the U.S. Centers for Disease Control and Prevention, the Agency for Healthcare Research and Quality, the Patient-Centered Outcomes Research Institute, the New York State Department of Health, the New York City Department of Health & Mental Hygiene, and the Robert Wood Johnson Foundation. For more information, please visit: http://www.med.nyu.edu/pophealth.

About the New York University College of Global Public Health