Conflicts exist within Ukraine but are not west versus east 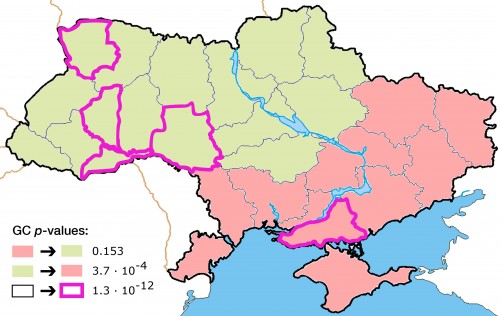 A map of Ukraine, with green and red regions marking pro-West and pro-Russian, but the purple outlined regions are more relevant to the war.

Newswise — WASHINGTON, May 24, 2022 -- When reading news and analyses of the Russian invasion of Ukraine, researchers in Spain perceived many conflicting messages being transmitted. The most notable one is the theory of “two Ukraines” or the existence of ideologically pro-West and pro-Russian regions.

This doesn’t match the unity of Ukrainians against the Russian invasion, so they wondered if they could provide any solid proof to support or reject such a theory via data analysis tools?

In Chaos, from AIP Publishing, Massimiliano Zanin and Johann Martínez, from Instituto de Fisica Interdisciplinar y Sistemas Complejos (Institute for Cross-Disciplinary Physics and Complex Systems), analyze a data set of violent events within Ukraine since January 2021 but prior to the invasion on February 24, 2022, by combining temporal and spatial correlations through entropy and complexity metrics with functional networks.

The key finding of their work is the theory of two Ukraines doesn’t hold up against the data. Conflicts do exist within Ukraine but aren’t ideologically west versus east. The researchers found these conflicts tend to form a complex network of interactions with no clear geographical boundaries.

“Contrary to Russian discourse, we have not seen any indication of an eastern part of Ukraine being harassed by a western part,” said Zanin. “This should be taken into account toward a possible resolution. The data suggest a solution involving splitting the country would be artificial and not guarantee long-term stability and peace.”

Statistical physics is a framework to analyze real complex systems but it is often a daunting task to get access to relevant quantitative data about international events, aside from social media sites such as Twitter. An increasing number of open intelligence communities, such as the Armed Conflict Location and Event Data Project, are beginning to change this.

“We use two techniques from statistical physics to analyze whether the appearance of violent events was independent or caused by others,” said Zanin. “We developed this idea on two axes: time and space. Time is used to explore whether some events are responses or reactions to previous events. Space is used to understand whether what happened within one region was a consequence of events within other parts of the country.”

As opposed to other fields, like engineering, obtaining reliable and high-quality data about social and political events is a major challenge.

“When working on this kind of data, it’s also uncomfortable, because we’d like to have more events to support more complex analyses. But there are victims and deaths behind the data,” said Zanin. “We wish this type of analysis wasn’t necessary at all.”