Staying Cool in the Nanoelectric Universe by Getting Hot

Research hints that nanodevices in microcircuits can protect themselves from heat generation; could boost computing power without large-scale changes to electronics 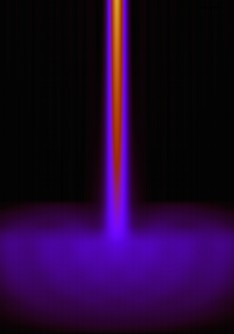 A University at Buffalo study hints that, to make laptops and other portable electronic devices more robust, more heat might be the answer. Here, nanoconductors squeeze an electrical current into a narrow channel, increasing the amount of heat circulating through a microchip’s nanotransistor.

Newswise — BUFFALO, N.Y. – As smartphones, tablets and other gadgets become smaller and more sophisticated, the heat they generate while in use increases. This is a growing problem because it can cause the electronics inside the gadgets to fail.

Conventional wisdom suggests the solution is to keep the guts of these gadgets cool.But a new University at Buffalo research paper hints at the opposite: that is, to make laptops and other portable electronic devices more robust, more heat might be the answer.“We’ve found that it’s possible to protect nanoelectronic devices from the heat they generate in a way that preserves how these devices function,” said Jonathan Bird, UB professor of electrical engineering. “This will hopefully allow us to continue developing more powerful smartphones, tablets and other devices without having a fundamental meltdown in their operation due to overheating.”

The paper, “Formation of a protected sub-band for conduction in quantum point contacts under extreme biasing,” was published Jan. 19 in the journal Nature Nanotechnology.Bird is the co-lead author along with Jong Han, UB associate professor of physics. Contributing authors are Jebum Lee and Jungwoo Song, both recently earned PhDs at UB; Shiran Xiao, PhD candidate at UB; and John L. Reno, Center for Integrated Nanotechnologies at Sandia National Laboratories.

Heat in electronic devices is generated by the movement of electrons through transistors, resistors and other elements of an electrical network. Depending on the network, there are a variety of ways, such as cooling fans and heat sinks, to prevent the circuits from overheating.

But as more integrated circuits and transistors are added to devices to boost their computing power, it’s becoming more difficult to keep those elements cool. Most research centers on developing advanced materials that are capable of withstanding the extreme environment inside smartphones, laptops and other devices.

While advanced materials show tremendous potential, the UB research suggests there may still be room within the existing paradigm of electronic devices to continue developing more powerful computers.

To achieve their findings, the researchers fabricated nanoscale semiconductor devices in a state-of-the-art gallium arsenide crystal provided to UB by Sandia’s Reno. The researchers then subjected the chip to a large voltage, squeezing an electrical current through the nanoconductors. This, in turn, increased the amount of heat circulating through the chip’s nano transistor.

But instead of degrading the device, the nanotransistor spontaneously transformed itself into a quantum state which was protected from the effect of heating and provided a robust channel of electric current. To help explain, Bird offered an analogy to Niagara Falls.“The water, or energy, comes from a source; in this case, the Great Lakes. It’s channeled into a narrow point (the Niagara River) and ultimately flows over Niagara Falls. At the bottom of waterfall is dissipated energy. But unlike the waterfall, this dissipated energy recirculates throughout the chip and changes how heat affects, or in this case doesn’t affect, the network’s operation.”

While this behavior may seem unusual, especially conceptualizing it in terms of water flowing over a waterfall, it is the direct result of the quantum mechanical nature of electronics when viewed on the nanoscale. The current is made up of electrons which spontaneously organize to form a narrow conducting filament through the nanoconductor. It is this filament that is so robust against the effects of heating.

“We’re not actually eliminating the heat, but we’ve managed to stop it from affecting the electrical network. In a way, this is an optimization of the current paradigm,” said Han, who developed the theoretical models which explain the findings.

The research was supported by the U.S. Department of Energy.