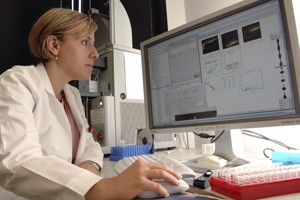 Dr. Rita Perlingeiro's research team has prompted the growth of healthy and functioning muscle cells in mice afflicted with a human model of Duchenne muscular dystrophy. This represents the first time transplanted embryonic stem cells have been shown to restore function to defective muscles in an MD model.

The study represents the first time transplanted embryonic stem cells have been shown to restore function to defective muscles in a model of muscular dystrophy.

The researchers' newly developed technique, which involves stringent sorting to preserve all stem cells destined to become muscle, avoids the risk of tumor formation while improving the overall muscle strength and coordination of the mice, the researchers found.

The mice used in the study lacked dystrophin, the same protein that humans with the fatal wasting disease also are missing.

The study, headed by Dr. Rita Perlingeiro, assistant professor of developmental biology and molecular biology, is available online today and in the February issue of Nature Medicine.

"We envision eventually developing a stem-cell therapy for humans with muscular dystrophy, if we are able to successfully combine this approach with the technology now available to make human embryonic stem cells from reprogrammed skin cells," Dr. Perlingeiro said. "These cells can be transplanted into the muscle, and they cause muscle regeneration resulting in stronger contractility."

The study represents a major step in the field, she said, because the researchers were able to tease out exactly the cells they wanted.

"The problem had been that embryonic stem cells make everything," Dr. Perlingeiro said. "They make a great variety of cells. The trick is to pull out only the one type you want."

The UT Southwestern researchers focused on manipulating genes that are active in the very early stages as embryonic stem cells start to develop into more specialized cells. At first, they activated a gene called Pax3, which is involved in creating muscle cells, and then injected those cells into the animals' muscles. Those cells caused tumors containing many different types of cells, indicating that there were still residual undifferentiated embryonic stem cells in the cultures at the time of implantation.

"Even if there are 10 undesirable cells, that's too many," Dr. Perlingeiro said.

The researchers then began using fluorescent dyes to sort cells depending on whether some surface markers were turned on while others were turned off. By analogy, it was as if they were dealing with a crowd of people and wanted to pull out only those with red hair, green scarves and blue coats, while those with red hair, green scarves and no coats would be disqualified.

The final selection of cells, containing only one type, was again injected into the animals' hind-limb muscles. After a month, the fluorescent dyes showed that the cells had deeply penetrated the muscle, an indication that they were growing and reproducing as desired, and many of the muscle fibers also contained dystrophin, the key protein lacking in muscular dystrophy.

After three months, the mice also showed no signs of tumors.Tests of isolated muscles showed that the treated muscles were significantly stronger than untreated mice lacking dystrophin, although not quite as strong as those of normal mice.

The treated mice also were tested for coordination. Again, their performance was better than that of untreated mice, but not as good as that of normal mice.

"The improved coordination is significant because it shows the embryonic stem cells have benefited the animal's quality of life, not simply caused an isolated growth with no overall improvement," Dr. Perlingeiro said.

The researchers will next investigate whether these transplanted cells can make "muscle stem cells," which are partially developed cells in muscle tissue that serve as a reserve to replenish muscles. They also are testing their implantation approach in animal models of other types of muscular dystrophy.

The work was supported by the Dr. Bob and Jean Smith Foundation.