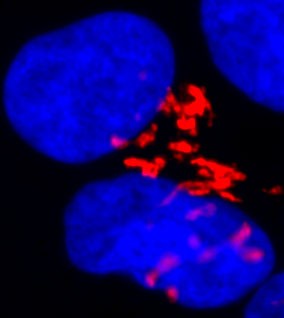 Newswise — CHAPEL HILL, N.C. – Embryonic stem cells — those revered cells that give rise to every cell type in the body — just got another badge of honor. If they suffer damage that makes them a threat to the developing embryo, they swiftly fall on their swords for the greater good, according to a study published online May 3, 2012 in the journal Molecular Cell.

The finding offers a new glimpse into the private lives of stem cells that could help scientists use them to grow new neurons or other cells to replace those that have been lost in patients with Parkinson’s and other diseases. “Despite the huge potential of stem cells for therapeutic use, very few people have actually investigated their basic biology,” said study senior researcher Mohanish Deshmukh, PhD, professor of cell and developmental biology at the University of North Carolina at Chapel Hill. “These results could have significant implications from a therapeutic perspective.”

Of all the important things our bodies’ cells do, staying alive is clearly key. But a cell’s ability to die when something goes wrong is equally critical. For example, a faulty self-destruct button is one factor that allows cancer cells to proliferate unchecked and cause tumors.

Deshmukh and his colleagues discovered stem cells are extremely sensitive to DNA damage, which can be caused by factors like chemicals, radiation or viruses. The experiment showed that virtually 100 percent of human embryonic stem cells treated with a DNA-damaging drug killed themselves within 5 hours, as compared to 24 hours for other types of cells. “That’s an incredibly rapid rate of death,” said Deshmukh, who also is a member of the UNC Neuroscience Center and Lineberger Comprehensive Cancer Center

The hair-trigger suicidal response is an important adaptation for embryonic stem cells, said the UNC School of Medicine researcher, because a slower response could allow DNA damage to proliferate and harm the embryo. “Mutations that develop in these cells could be catastrophic for the developing organism, so it would make sense for these cells to be rapidly eliminated.”

The key to the stem cells’ quick response is that they pre-activate a critical protein called Bax, the researchers found. In most cells, Bax is is kept in an inactive form, waiting for a long chain of events to rouse it into action if the cell becomes damaged enough to kill itself. In human embryonic stem cells, the team found Bax standing at attention in its active form in the Golgi apparatus, a part of the cell that processes and modifies proteins.

“What these cells do is very clever,” said Deshmukh. “They have activated Bax, but they’ve also parked it in a safe little compartment—the Golgi.” If the cell detects DNA damage, Bax zips over to the mitochondrion (the cell’s power plant), where it signals other proteins to shut the cell down.

It’s like starting a 100-yard race at the 80-yard line, said Deshmukh. You’re guaranteed to get to the finish line first because you did most of the work before the race began. However, there are built-in safeguards against a hair trigger activation of death. Pre-activated Bax is housed in the Golgi keeping the protein from accidentally triggering cell death when it’s not warranted.

This extreme sensitivity to DNA damage lasts only a few days during early development. After the embryonic stem cells begin differentiating into early progenitors that give rise to specific cell types (like heart cells or skin cells), Bax reverts to its inactive state.

UNC Co-first authors of this study are - Raluca Dumitru and Vivian Gama. Other UNC Co-authors include B. Matthew Fagan, Jacquelyn J Bower, Vijay Swahari and Larysa H Pevny. The study was funded by grants from the National Institutes of Health (National Institute of General Medical Sciences) and UNC’s University Cancer Research Fund.