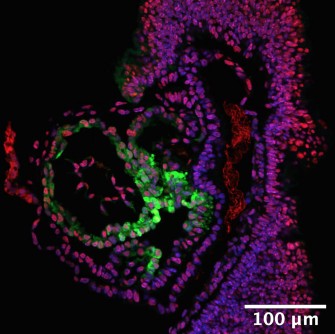 Hopx+ cells (green) in the early embryo that are capable of expansion. Red is proliferating cells; blue is nucleus of cells.

Newswise — PHILADELPHIA—Future therapies for failing hearts are likely to include stem-like cells and associated growth factors that regenerate heart muscle. Scientists from the Perelman School of Medicine at the University of Pennsylvania have just taken an important step towards that future by identifying a stem-like “progenitor” cell that produces only heart muscle cells.

“We’ve defined the progenitor cell that is committed to making heart muscle, and we’ve started to define the factors that make that cell grow and form heart muscle cells,” says senior author Jonathan Epstein, MD, chair of the Cell and Developmental Biology Department.

The report from Epstein and his laboratory appears this week in the cover article of Science.

Evolution has left the mammalian heart with relatively little self-repair capacity compared to skin, bone, and other tissues, possibly because an extensive repair process would compromise the heart’s ability to keep working. Nevertheless, scientists have been trying to find ways to amplify the heart’s limited regenerative potential and have looked for clues in the embryonic phase of life, when the heart forms itself from stem-like cardiac progenitor cells (CPCs).

A major goal has been to understand how CPCs give rise to the different cell types of the mature heart, which include muscle cells (cardiomyocytes) and endothelial cells that line cardiac chambers and valves. In particular, scientists have wanted to identify progenitor cells that have matured just beyond the “multipotent” CPC state, so that they are committed to making just one type of cardiac cell.

The CardiomyoblastIn the new study, Epstein and his colleagues identified a cardiac progenitor -- which they term a cardiomyoblast -- that gives rise exclusively to cardiomyocytes. The finding occurred somewhat unexpectedly, as researchers in Epstein’s laboratory performed “lineage tracing” experiments on mouse CPCs by marking different cells with fluorescent beacons and observing their fates as they proliferated and matured. The scientists found that CPCs expressing a particular protein called Hopx always went on to form cardiomyocytes.

“We thought that Hopx would also mark a multipotent progenitor cell, and we were surprised to learn that it was marking only the cells that were going on to make heart muscle. It was an exciting moment in the laboratory when we realized that,” says Epstein.

Hopx has been known as a marker of progenitor cells in other tissues, including the gut, hair follicles, and lungs. Epstein and colleagues first linked it to heart development in a study published in 2002, noting that its deletion leads to severe heart defects in mice and zebrafish.

To find out more about Hopx’s role in heart development, co-first author Rajan Jain, MD, a cardiologist and instructor in the Department of Medicine, overexpressed it in embryonic mouse hearts and observed that at an early phase of development this overexpression led to an increase in the number of cardiomyocytes. He also found that Hopx exerts this effect by suppressing the activity of genes in the Wnt signaling pathway, which helps maintain some cells in a multipotent, stem-like state. By contrast, embryonic heart cells lacking Hopx showed higher levels of Wnt signaling and gave rise to far fewer myocytes.

Researchers have known that the suppression of Wnt signaling in multipotent progenitor cells typically induces them to move towards a more mature cell type. In the heart and other tissues, that process has been linked to the activity of another protein called Bmp. Jain and colleagues found that for heart cell development, Hopx is a critical go-between, associating with Smad proteins to work as Bmp’s enforcers in the suppression of Wnt signaling.

Future ImplicationsThe findings expand the basic scientific knowledge of how the mammalian heart develops and should speed research in this area -- not least because scientists now have a definitive marker, Hopx, that they can use to isolate the cardiomyoblast progenitors that specifically make heart muscle cells.

The work also could accelerate the development of future cardiac therapies, which might include the injection of cardiomyoblasts into damaged hearts. Initial efforts to treat damaged heart muscle in animal models and people, using multipotent cardiac progenitors or stem-cell-derived myocytes, have met with some success, but also false starts and controversy, in part because so little has been known about how cardiomyocytes originate.

“We’ve really needed a cardiomyocyte-specific progenitor, and with this finding we can identify and purify those progenitors,” says postdoctoral researcher and co-first author Deqiang Li, PhD, who performed the Hopx lineage-tracing studies.

“Understanding where commitment to the cardiomyocyte fate is occurring, what signals are involved, and how a cell can integrate all of them, will hopefully inform our ability to advance novel therapeutics,” says Jain.

He notes that those novel therapeutics might include not just cell-based therapies but also implantable bioengineered patches of heart muscle.

What’s more, knowing how Hopx and other factors help generate myocytes in the embryonic heart might lead to drugs that stimulate the adult heart to produce its own new myocytes, says Epstein. He notes that previous basic studies of how blood cells develop led to blockbuster medicines such as the red cell growth factor EPO, and the white cell booster GM-CSF.

A next step for the Epstein lab in this line of research is to see if the cardiomyoblasts and other factors that generate heart muscle cells in early life also do so to some extent in later life, after a heart attack or other injury. “We hope that by understanding how it happens in the embryo we’ll be in a better position to find the cells that play a similar role in the adult heart,” Epstein says.

###Penn Medicine is one of the world's leading academic medical centers, dedicated to the related missions of medical education, biomedical research, and excellence in patient care. Penn Medicine consists of the Raymond and Ruth Perelman School of Medicine at the University of Pennsylvania (founded in 1765 as the nation's first medical school) and the University of Pennsylvania Health System, which together form a $4.9 billion enterprise.