A newly approved stent designed to treat glaucoma is a new option for some patients at U-M’s Kellogg Eye Center, one of the first centers in the country to offer it.

A newly approved stent designed to treat glaucoma is a new option for some patients at University of Michigan Kellogg Eye Center, one of the first centers in the country to offer it. 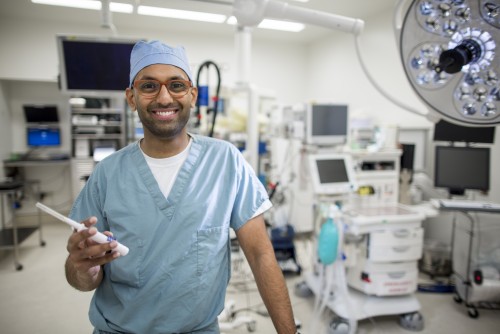 Led by Manjool Shah, M.D., University of Michigan Kellogg Eye Center was one of the first eye centers in the country to implant the Xen gel stent to treat complex, open angle glaucoma.

New technology could help preserve a patient’s vision while reducing those risks.

In a first for glaucoma treatment, the University of Michigan Kellogg Eye Center is using a tiny tube, permanently implanted in the eye, to help relieve intraocular pressure

Known as the XEN Gel Stent, the device creates an opening between the inside of the eye and the eye’s outer layer to allow fluid to drain, potentially decreasing pressure in the eye to a normal level.

Made of a soft but permanent gelatin material, the stent is 6 millimeters long and about the width of a human hair. Doctors inject the stent through a small, self-sealing corneal incision using a preloaded injector.

Kellogg is among the first eye centers in the country to offer the treatment from Allergan after clinical trials showed it was safe for patients.

“Overall, this is a potentially safer alternative to traditional glaucoma filtration surgery,” says Kellogg glaucoma specialist Manjool Shah, M.D. “But with any implant, there is a theoretical risk of implant exposure.”

Approved in November 2016 by the U.S. Food and Drug Administration,the XEN Gel Stent represents a new way to treat glaucoma.

And the stent differs from current approaches: Most glaucoma patients begin with medical therapy, including eyedrops, followed by laser trabeculoplasty — which uses a very focused beam of light to treat the drainage angle of the eye. After that, they’ll receive either a trabulectomy (creating an opening for fluid to drain out) or a glaucoma drainage device.

It is part of a growing field known as minimally invasive glaucoma surgery (MIGS) to help adults with mild to moderate glaucoma.

Since February, about one dozen Xen implant procedures have been performed at Kellogg — and the facility expects to do more — but the option isn’t suitable for everyone.

“Choosing the right candidates is a clinical decision based on a number of factors, including the type and severity of glaucoma as well as previous surgical history,” says Shah, a clinical instructor in the Department of Ophthalmology and Visual Sciences at U-M.

Still, he adds, “MIGS procedures are generally faster than trabulectomy and tube shunt surgeries, and shortened surgical and recovery times can be very important to patients.”

Sandra Hodel, 83, had received a Xen implant at Kellogg in February after previous surgery to bring down intraocular pressure. Left untreated, such pressure can damage one’s optic nerve and cause a slow but steady loss of vision.

No longer: “The difference was like night and day,” Hodel says of the short recovery period after the procedure.