Stepped-Up Vaccine Series for Hepatitis B Is Effective During Pregnancy 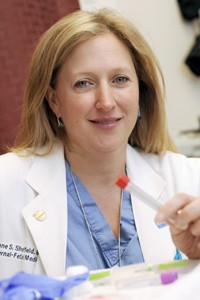 An accelerated hepatitis B vaccination schedule for high-risk pregnant women was found effective and well-tolerated. The findings appear in the journal Obstetrics & Gynecology.

While the normal three-shot regimen of hepatitis B vaccine for adults – given over a six-month period – has long been recommended for pregnant women, that schedule often proved unmanageable in the course of a pregnancy.

“It’s difficult to get all three doses in pregnancy, and people tend to get lost to follow-up, especially high-risk populations,” said Dr. Jeanne Sheffield, associate professor of obstetrics and gynecology at UT Southwestern and lead author of the study.

The research team stepped up the process for pregnant women and used the normal three-shot dosage given to adults over a 12-week period. That regimen is the shortest recommended schedule in nonpregnant adults that still offers protective long-term immunity.

In the U.S., nearly 1.5 million people live with chronic hepatitis B infection, and it is the underlying cause of 3,000 deaths per year. The American College of Obstetricians and Gynecologists recommended in 1993 and in 2007 that pregnant women at risk for hepatitis B should receive vaccination.

Dr. Sheffield said, however, that health care providers seldom offer the hepatitis B vaccine series to reproductive-aged women because of lack of physician and patient education, patients’ fear of vaccination and its purported side effects, and the overall reluctance to vaccinate pregnant women.

Even though the Centers for Disease Control and Prevention reports pregnancy is not a contraindication to hepatitis B vaccine, limited data were available on its use in pregnancy.

In the current study, conducted at Parkland Memorial Hospital, researchers enrolled high-risk women with a current diagnosis of a sexually transmitted disease, injection drug use or both, over a six-year period. Of 200 women enrolled, 168 received all three doses of the vaccine.

Researchers found that race, maternal age, tobacco and alcohol use, and gestational age at first vaccination did not affect seroconversion rates – the development of antibodies against hepatitis B – using the accelerated schedule. Obesity had a negative influence, however.

The accelerated schedule in pregnancy had seroconversion rates (90 percent) that were comparable to the standard schedule in healthy adults. The study also showed no increase in preterm delivery rates or neonatal intensive care admissions.

“The vaccine was well-tolerated in our pregnant women, and no serious adverse events were reported,” Dr. Sheffield said. “Initial concerns about the ability of a pregnant woman to mount an effective immune response to a vaccine are largely unfounded. It’s doable.”

The study was funded by Warren H. Pearse/Wyeth Pharmaceuticals and the Women’s Health Policy Research Award.

Visit http://www.utsouthwestern.org/obgyn to learn more about clinical services in gynecology and obstetrics at UT Southwestern.

This news release is available on our World Wide Web home page at www.utsouthwestern.edu/home/news/index.html