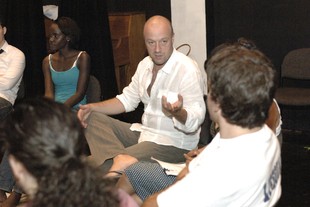 Stage, film and television actor Yasen Peyankov instructs students in ensemble acting at the University of Illinois at Chicago.

Newswise — Actor and director Yasen Peyankov, known for his work with Chicago's Steppenwolf Theatre ensemble, has been named associate professor of performing arts and head of the acting program at the University of Illinois at Chicago.

Peyankov will begin his new duties this fall. He will be responsible for teaching and redeveloping curricula in two degree programs, the bachelor of fine arts in performance, which emphasizes acting, and the bachelor of arts in theatre, which balances acting, directing and design.

He also will direct some plays at the UIC Theatre, beginning with Lanford Wilson's "Balm in Gilead," opening Oct. 5.

Peyankov plans to incorporate the ensemble approach, which he defines as "acting as a team sport," along with the basics of Konstantin Stanislavsky's naturalistic system, sometimes called the method.

He hopes to increase the required number of hours of acting per week, in the tradition of his studies at the National Academy of Theatre and Film Arts of Sofia in his native Bulgaria.

"Acting is serious work. It doesn't happen only through inspiration," Peyankov said. "Talent is not the most important quality in an actor; a lot of talented actors never make it. What you need the most is character and perseverance. Otherwise you'll never make it because it is very competitive and full of rejection."

Peyankov noted the difference between actors who play most roles in their own style and those who adapt fully to each role.

"I want to train actors to be creative, thinking slightly out of the box, and be ready to withstand the pressure -- actors who are versatile and employable," he said.

Peyankov has taught at UIC, the School at Steppenwolf and the University of Chicago. He also has directed students in plays at the UIC Theatre, including last spring's "Featuring Loretta," an ensemble comedy in George Walker's "Suburban Motel" series.

"Yasen Peyankov is the logical choice to run the new BFA program," said Michael Anderson, director of the Department of Performing Arts. "He has enormous respect in the theatre community for his award-winning work with Steppenwolf, and as an actor with many Hollywood film and TV credits. We're confident that he'll broaden our students' perspectives and make UIC a key player in actor training."

Peyankov has appeared in 15 Steppenwolf productions since 1997, most recently as Otto Frank in "The Diary of Anne Frank" last spring. He received a 1999 Joseph Jefferson award for the Steppenwolf production of "Morning Star" and was nominated for his translation of Anton Chekhov's "Ivanov."

His film credits include Robert Altman's "The Company." He has appeared in nine television series, including "The Practice" and "Early Edition."

He will continue his acting career while teaching, including a role next year in Steppenwolf's premiere of "Superior Donuts" by ensemble member Tracy Letts.

UIC ranks among the nation's top 50 universities in federal research funding and is Chicago's largest university with 25,000 students, 12,000 faculty and staff, 15 colleges and the state's major public medical center. A hallmark of the campus is the Great Cities Commitment, through which UIC faculty, students and staff engage with community, corporate, foundation and government partners in hundreds of programs to improve the quality of life in metropolitan areas around the world.