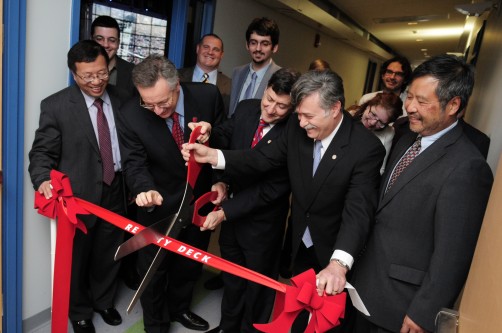 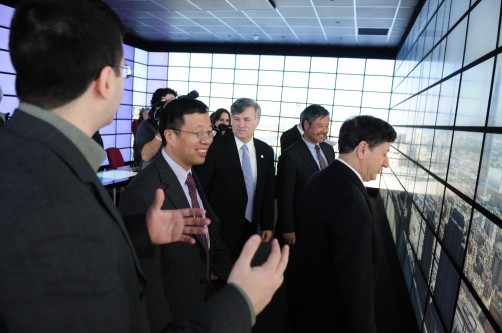 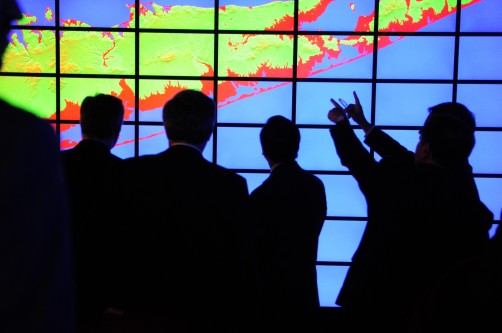 The Reality Deck has applications available for climate modeling, weather modeling and storm surge. Pictured in red is the storm surge that would likely occur to Long Island should a Category 5 hurricane hit the area.

Image of the Milky Way viewed in the Reality Deck at Stony Brook University.

Newswise — STONY BROOK, NY, November 15, 2012 – Stony Brook University unveiled its latest engineering feat, a 1.5 billion pixel Reality Deck, at a demonstration held at the University’s Center of Excellence in Wireless and Information Technology (CEWIT) on November 15. The Reality Deck, a 416 screen super-high resolution virtual reality four-walled surround-view theater, is the largest resolution immersive display ever built driven by a graphic supercomputer. Its purpose and primary design principle is to enable scientists, engineers and physicians to tackle modern-age problems that require the visualization of vast amounts of data.

The Reality Deck, constructed with a $1.4 million National Science Foundation (NSF) grant and a $600,000 match from Stony Brook University, is the first to break the one billion pixel mark with a resolution five times greater than the second largest in the world. To illustrate the resolution, Project Director, Arie E. Kaufman, PhD, Distinguished Professor and Chair of the Computer Science Department and Chief Scientist of CEWIT, said that the entire United States population of approximately 300 million people could take a “class photo” from a satellite, and “there would be enough resolution for each person to be depicted in five pixels in color demonstrating the super-high resolution of the facility.”

“This technology will be used for visualizing and analyzing big data, such as advanced medical imaging, protein visualization, nanotechnology, astronomical exploration, micro tomography, architectural design, reconnaissance, satellite imaging, security, defense, detecting suspicious persons in a crowd, news and blog analyses, climate and weather modeling, as well as storm surge mapping to fight flood disasters, such as Superstorm Sandy and global warming,” said Dr. Kaufman. “The Reality Deck is the next generation virtual reality display at the vanguard of visual computing, with the ability to handle tasks involving huge amounts of data,” said Dr. Kaufman. “In the Reality Deck, data is displayed with an unprecedented amount of resolution that saturates the human eye, provides 20/20 vision, and renders traditional panning or zooming motions obsolete, as users just have to walk up to a display in order to resolve the minutiae, while walking back in order to appreciate the context that completely surrounds them.”

Dr. Kaufman added, “We’ve never had a way to analyze and display tremendous amounts of data at one time before. This is revolutionary for visual analytics, which is the most powerful and critically important analyses.”

Another feature of the Reality Deck is the “infinite canvas,” a 360-degree smart screen that changes images according to the location of the viewer walking around the Reality Deck, so the same image is never viewed twice and infinitely big data can be explored. Future applications to stream video in real time are also in the works.

“This revolutionary facility will further advance the research impact of Stony Brook University and CEWIT on the national and international research agenda for healthcare, national security, energy research and the STEM disciplines,” said Yacov Shamash, Dean of the College of Engineering and Applied Sciences and Vice President of Economic Development at Stony Brook University. “The Reality Deck will spur medical breakthroughs, groundbreaking new technologies and greater partnerships with industry that will help to create new jobs.”

Dr. Kaufman was a pioneer in developing 3-D Virtual Colonoscopy systems that provides patients with a non-invasive cancer screening alternative. A series of patents was awarded to Stony Brook for his work during the past decade, and 3-D Virtual Colonoscopy was approved for colon cancer screening in the United States by the Food and Drug Administration in 2004. In 2008 Siemens Healthcare and another CT manufacturer signed landmark non-exclusive license agreements with the University for the portfolio of innovations related to performing three-dimensional virtual examination, navigation and visualization, including the virtual colonoscopy. 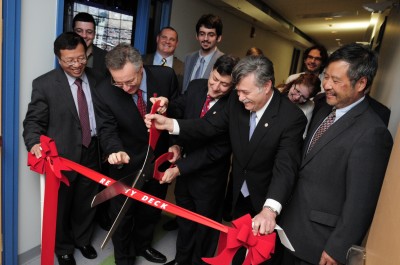 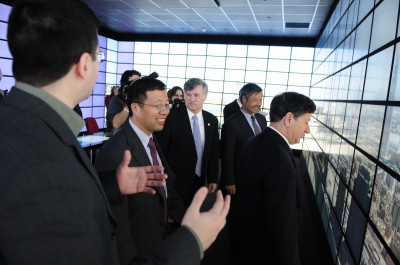 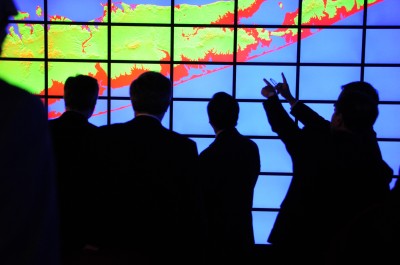 Caption: The Reality Deck has applications available for climate modeling, weather modeling and storm surge. Pictured in red is the storm surge that would likely occur to Long Island should a Category 5 hurricane hit the area.

Caption: Image of the Milky Way viewed in the Reality Deck at Stony Brook University.