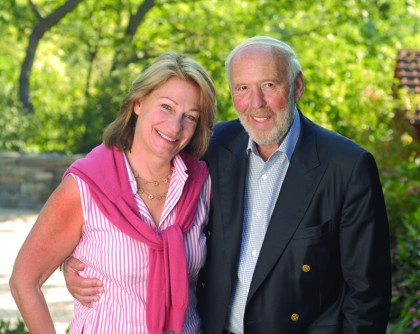 Jim and Marilyn Simons of the Simons Foundation. 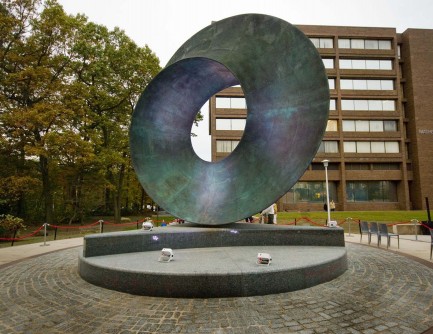 The Umbilic Torus created by artist Helaman Ferguson and donated to Stony Brook University by Jim and Marilyn Simons and the Simons Foundation.

Newswise — STONY BROOK, NY, March 4, 2013 — Stony Brook University has long been known for providing opportunities for talented, high achieving students who want a quality, affordable, public higher education experience and the better future that goes with it. Now, a multitude of friends and former students have given to the University in historic fashion – helping to raise a staggering $200 million in 12 months. This collective gift-- involving more than 1,500 donors--is the largest in the University’s 57-year history, and is the sixth largest donation ever made to an American public university, according to The Chronicle of Higher Education. The catalyst was a $50 million matching challenge as part of the $150 million gift from philanthropist Jim Simons and his wife Stony Brook alumna Marilyn Hawrys Simons ’74, ’84. Designed to transform the University’s future through a wide range of educational and research endeavors, the Simons gift has already generated a record number of scholarships, fellowships, endowed chairs and professorships, and benefited dozens of strategic initiatives across campus, from the arts to marine sciences, from chemistry to medicine, from advanced computing to Hellenic studies, to name a few. “We were both surprised and delighted that our gift was matched so quickly,” Jim Simons said. “Stony Brook is an outstanding public university, offering a wonderful education at reasonable cost to many thousands of young people. The generosity of those who joined us in this effort will enhance the University in many dimensions, making that education more valuable still.” The Stony Brook Foundation had estimated it would take three to five years to raise donations needed to match the Simon’s challenge. The goal was met and surpassed within a 12 month period, according to Stony Brook University President Samuel L. Stanley Jr., MD. “We are honored and overwhelmed by the response to the Simons Foundation challenge from friends, faculty and staff, and alumni,” said Stony Brook University President Samuel L. Stanley Jr., MD. “Their generous investments in Stony Brook are a tangible expression of their commitment to public higher education and the important work we do here at Stony Brook. “And, of course,” added Stanley, “ it’s the kind of historic outpouring that could only be inspired by Jim and Marilyn, who have dedicated so much to philanthropy, especially that which furthers the boundaries of knowledge and science.” Richard Gelfond, President of the Stony Brook Foundation, credited the Simons and the Simons Foundation with crafting their gift in a way that advanced the Stony Brook Foundation’s core mission. “The Simons’ gift was deliberately designed to support access, promote excellence, and create a culture of responsibility for supporting the greater good,” said Gelfond. Dexter Bailey, Stony Brook Foundation Executive Director and Vice President of University Advancement, noted that the Simons’ matching challenge was not the 1,500 donors’ only motivator. “At their core, our donors are even more inspired by the mission of public higher education and the priorities of a world-class research university.” Over time, a top priority of the University is to recruit 267 new faculty members to the University and establish 100 endowed professorships and chairs funded by private dollars. “Endowed faculty appointments represent the highest academic honor and attract the best and brightest faculty to our campus,” said President Stanley. “In turn, these academic stars attract the best and brightest students. These great minds are what will solidify Stony Brook’s place among the elite universities in the country.” Following, is a brief look at some of the many initiatives that will be advanced by the $100 million total raised through the $50 million from Stony Brook friends and alumni who answered the Simons’ $50 million matching challenge: (further details available at http://www.stonybrook.edu/sb/simonseffect/.

- Advancing Cardiac Imaging and Wellness: $4 million in total donations, including a major gift from Eugene and Carol Cheng from Stony Brook class of 1997, who created an endowment to support cardiovascular imaging research by Dr. Michael Poon that advances non-invasive techniques to diagnose and treat heart disease; and $3 million from an anonymous donor to establish a Center for Cardiovascular Wellness and Preventative Research.- Enhancing Hellenic & India Studies Programs: $3.8 million in total donations, including $2.5 million from Dr. Nirmal Mattoo to establish a professorship and $100,000 from Dr. Krishna Gujavarty to fund a Seminar Series at the Center in India Studies and $1.2 million from George and Olga Tsunis to fund the Center in Hellenic Studies and a new professorship;- Establishing an Advanced Supercomputing Institute: $10 million from an anonymous donor to create an Institute for Advanced Supercomputing at Stony Brook. Leading the new Institute is the renowned Robert Harrison, an expert in the high-performance computing applications that will change the way science finds its answers, how industry develops its products, and how society analyzes its needs;- Helping Restore Marine Environments: $1.5 million from the Laurie Landeau Foundation to help fund a comprehensive program that is restoring the ecosystem of Long Island’s Shinnecock Bay and serving as a model for other similar marine environments around the country; - Investing in Imaging Technology and Enhancing Research in Pediatric MS: $2.5 million from Robert and Lisa Lourie to expand the research and clinical advances that help diagnose, treat and prevent pediatric multiple sclerosis; - Establishing a Chair in Modern Art: The Simons’ match of the $1.5 million gift from the Thaw Charitable Trust to strengthen the endowment of the Pollock-Krasner House and Study Center is being used to create the Eugene V. & Claire E. Thaw Endowed Chair in Modern American Art;- Fostering Clinical and Educational Scholarship: An anonymous $2 million gift to enhance the quality and effectiveness of teaching among clinician-educators at the School of Medicine and; - Expanding Access to Education Excellence: $3.2 million earmarked for the equivalent of an estimated 628 student tuition scholarships for undergraduate, graduate and doctoral programs.

“We should celebrate this historic moment at Stony Brook, but also understand that it will take continued collaboration and commitment to philanthropy to give us that margin of excellence consistent with all great research universities,” concluded Stanley. “It is an effort that is not only helping reinvent our University in the present, but one that will have many positive impacts for many generations to come.” About the Stony Brook FoundationThe Stony Brook Foundation is a not-for-profit 501(c)(3) corporation established in 1965 as the University’s sole repository for philanthropic contributions from individuals, corporations, foundations, and other organizations in support of Stony Brook University. The Foundation administers the University’s scholarship funds. Every dollar donated for scholarships goes directly to scholarships—no administrative fee is charged on scholarship accounts. For more information about contributing to our scholarship funds or creating an endowed named undergraduate scholarship or graduate fellowship, please call the Advancement Office at (631) 632-6300 or visitwww.stonybrook.edu/foundation. ### 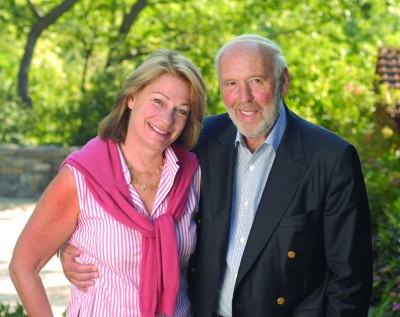 Caption: Jim and Marilyn Simons of the Simons Foundation. 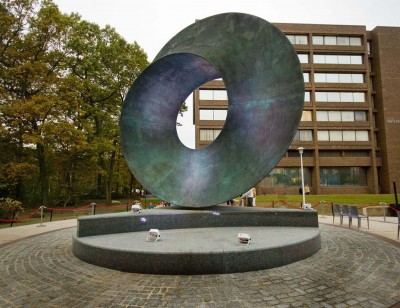 Caption: The Umbilic Torus created by artist Helaman Ferguson and donated to Stony Brook University by Jim and Marilyn Simons and the Simons Foundation.