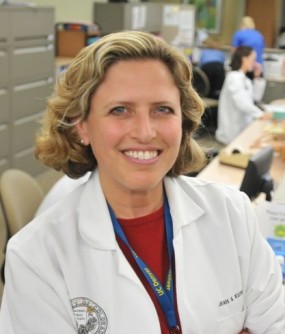 Jean Kutner, MD, MSPH, CU Cancer Center investigator and professor of medicine at the University of Colorado School of Medicine

Newswise — Results presented today at the 50th Annual Meeting of the American Society for Clinical Oncology (ASCO) and June 6 at the European Association of Palliative Care Research Conference show that stopping statins for cholesterol management in the late stages of cancer or other terminal illnesses may offer quality-of-life and even life-extending benefits. The results highlight the larger question of when, if ever, it is appropriate in patients with life-limiting illnesses to discontinue medications prescribed for other conditions that will likely not lead to their death.

Researchers from the University of Colorado Cancer Center and the Palliative Care Research Cooperative Group report that discontinuing statins in patients with advanced illnesses resulted in improved overall quality of life, lower costs and no increased deaths. In fact, the patients who stopped taking statins appeared to live slightly longer.

“Based on the study, for patients that are on medications for primary or secondary prevention – for example, those who have not just had a stroke or heart attack – and have a limited life expectancy of less than one year, I would recommend discussing with their physicians the potential to stop taking statins,” says Jean Kutner, MD, MSPH, CU Cancer Center investigator and professor of medicine at the University of Colorado School of Medicine.

“We tend to be so focused on which medications are effective to start but there’s no research on if and when to stop them. It’s a new line of investigation. Especially in the context of end-of-life care, we believe there are many situations in which preventative drugs may be doing more harm than good,” Kutner says.

Kutner points to medicines taken to prevent osteoporosis, blood clots, high blood pressure, and diabetes as candidates for future study. These are things people take to prevent something or treat a chronic illness. But particularly in the advanced cancer population, they may not be achieving the intended benefits,” Kutner says.

The study enrolled 381 patients who faced the likelihood of dying within a year. All patients had been taking statins for at least three months; roughly half were randomized to continue taking the drug, the other half to discontinuing it.

The researchers followed the patients for up to a year to monitor survival, cardiovascular events and changes in quality of life.

Among the 192 study patients who continued statins, the median survival was 190 days; the 192 participants who stopped taking the drugs had a median survival of 229 days.

Those who discontinued the drugs reported a better overall quality of life, particularly in their psychological wellbeing, and saved money: $716 per person over the course of the trial for name-brand drugs, and $629 for generics.

Using U.S. population estimates, the researchers reported that as much as $603 million a year could be saved if patients in the late stages of fatal illnesses were to cut out statins.

“One thing we found during the study was clinicians saying, ‘hey I never thought about stopping people’s statins.’ The study raised awareness. Here’s a setting in which these drugs may not be doing most patients any good any more and bringing up the subject of stopping unneeded medications offers the opportunity for shared decision-making. There’s power in individual choice,” Kutner says.

In addition to Kutner, study authors include Diane Fairclough and Patrick J. Blatchford at the CU Cancer Center; Amy Abernethy and Don Taylor at Duke; Laura Hanson at the University of North Carolina; Christine Ritchie at the University of California, San Francisco; and Janet Bull, Four Seasons.