Stories Since the Storm

The latest issue of The Common presents writing from and about Puerto Rico, a year after Hurricane María.

As a publication dedicated to literature with “a modern sense of place,” The Common takes readers on a sort of world tour in every issue. But the newest issue of the biannual Amherst-affiliated journal includes a special exploration of Puerto Rico in the aftermath of Hurricane María.

A 120-page section of Issue 16, titled De Puerto Rico: Un año después de la tormenta / From Puerto Rico: One year after the storm, features essays, fiction, poetry and visual art from more than 20 Puerto Rican contributors. Many works are translated from, or appear in English alongside, the original Spanish. And each piece provides a different perspective, whether explicit or symbolic, on the devastation wrought by the hurricane in September 2017.

The Common’s production team, which includes Editor-in-Chief Jennifer Acker ’00 and numerous Amherst student interns, among others, marked the launch of Issue 16 with a series of events on the Amherst campus, at the Hampshire College Art Gallery and in nearby Holyoke, Mass., which has the largest per-capita Puerto Rican population of any city outside of Puerto Rico itself.

On Nov. 5, two Amherst classes—“Engaging Literature: Craft, Conversation, Community,” taught by Assistant Professor of English Alicia Christoff, and “Major Debates in Latinx and Latin American Studies,” taught by Assistant Professor of Spanish Sony Coráñez Bolton and Professor of Spanish Paul Schroeder Rodríguez—gathered in a classroom in the new Science Center for a discussion with Acker and three of Issue 16’s contributors. María Luisa Arroyo Cruzado read her poem describing how the hurricane “screamed / like a sea of women being buried alive in water,” Sergio Gutiérrez Negrón read the beginning of his short story “People Who Go to the Beach Alone,” and Ana Teresa Toro read from her essay “To Abandon Paradise.”

The authors’ conversation focused mainly on the complicated effects of colonialism on Puerto Rico and its people. In Toro’s journalism and fiction, this topic is “an obsession, because I’m a colonized human being,” she said. “I want to decolonize myself through writing.”

Arroyo Cruzado, who was born on the island but raised in Springfield, Mass., and now teaches at Bay Path University in Longmeadow, Mass., stomped her foot as she recalled how her teachers would tell her and other Spanish-speaking children, “You’re in America now—speak English”; she noted that she went on to study German in college and to marry a Farsi speaker from Iran.

“Every time I publish a novel or a book, I’m a little bit farther away from Puerto Rico,” said Gutiérrez Negrón, who now lives and teaches in Oberlin, Ohio. He added that “a postcolonial future of Puerto Rico has to include the diaspora”—the millions of people who have moved away from the island but remain culturally, politically and emotionally rooted in it.

Toward the end of the gathering, students posed questions to the authors about loneliness as a theme in their writing and the challenges of writing for multiple audiences, as well as about “disaster capitalism”—the economic exploitation of the island in María’s wake.

The Common’s celebration of Issue 16 culminated the following evening in the College’s Powerhouse, with a dinner, public reading and reception. It included Toro, Arroyo Cruzado, Gutierrez Negron and others from the issue’s range of voices, speaking up over the roar of last year’s storm. 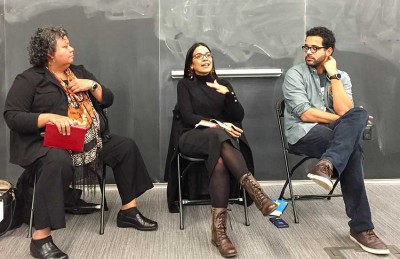 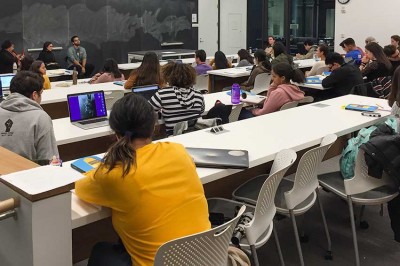