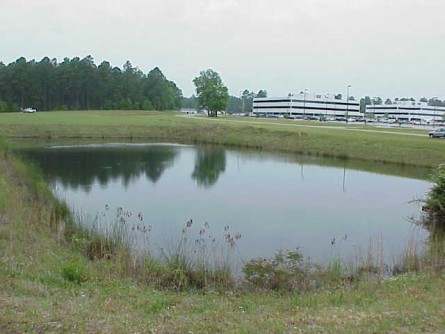 Researchers found that stormwater retention ponds are not completely effective at preventing road salts from contaminating streams and wetlands.

Newswise — In winter, most municipalities rely on chemicals to melt ice and keep roadways and parking lots clear and safe for travelers. The most common chemical used, owing to its low cost and its effectiveness at low temperatures, is sodium chloride, commonly referred to as road salt.

Researchers at Virginia Tech and Towson University in Maryland are concerned that the types of chemicals used to treat roads in winter, particularly road salts, are not being effectively absorbed by soil and plants as intended by mitigation measures and may be reaching waterways.

Stormwater management practices are designed to intercept water runoff from roads and parking lots before pollutants reach surface waters. Detaining runoff in retention ponds can reduce flooding, increase the amount of water that is absorbed into the ground, and allow pollutants to bind to sediments in the ponds or be absorbed by algae and plants instead of traveling to streams and wetlands where they may harm wildlife and human health.

The research team recently completed a study, published in Environmental Science and Technology, to determine how well current stormwater management practices mitigate the effects of road salts and how those salts might be impacting both the surface waters in streams and ponds, and the groundwater that many citizens using well systems rely on daily.

“We know that surface waters in many areas are becoming more saline and that salt levels have been rising steadily for at least the past 30 years in reservoirs that provide water for Baltimore,” said Joel Snodgrass, professor and head of the Department of Fish and Wildlife Conservation in Virginia Tech’s College of Natural Resources and Environment. “However, we know little about the effectiveness of stormwater management practices in reducing inputs of salt to surface waters.”

The researchers tested water samples from stormwater ponds in Baltimore County and surface waters in the county’s Red Run watershed to compare the concentrations of sodium and chloride ions in groundwater between stormwater ponds and streams.

Water in the ponds gradually soaks into the ground and moves downslope toward streams. If the stormwater ponds were working effectively, Snodgrass explained, he and his team could test the groundwater between the ponds and streams and expect to find very little sodium chloride because it would have been retained in the ponds.

In fact, the opposite seemed to be true. The researchers discovered that routing runoff contaminated with road salts to stormwater ponds actually resulted in plumes of highly contaminated groundwater moving from the ponds to streams.

In addition, high levels of contamination were not only present during winter months but in the summer months as well, meaning that some of the road salts are being retained within the groundwater close to the surface and released to streams little by little.

“Current stormwater management practices may help slow the movement of road salts to streams, but they don’t completely stop it from getting there,” Snodgrass explained. “On top of that, the road salts are entering these bodies of water in a fashion that causes salt levels in streams to remain elevated year-round.”

Elevated salt levels in groundwater and surface waters can have negative impacts on wildlife and humans. If salt levels continue to increase in freshwater areas, many fish and amphibians will stop breeding and eventually die because their bodies cannot adjust to the change.

“You’re basically putting these animals in a desert, because they can’t regulate the salt in their bodies and get enough water to balance it out,” Snodgrass said.

On the human side, added salt in the water system can change the taste and color of well water and eventually cause wells to stop providing potable water.

There are also economic implications to consider.

“Some counties are already reimbursing people for the costs associated with replacing contaminated water wells,” he added.

So what can be done?

According to Snodgrass, the answer is complicated. More research will have to be conducted to analyze the costs and benefits associated with using road salts. Snodgrass and his team plan to continue researching how road salts and other chemicals affect wildlife and the environment, while other researchers are exploring the effectiveness of alternatives to road salts and their potential effects on the environment and human health.

“It’s a balance sheet we’re looking at between economics and the environment and human health,” Snodgrass said. “This is a complex problem that’s going to take an interdisciplinary team to tackle, including sociologists, economists, and chemists, as well as biologists and ecologists.”