Story Ideas from the Journal of Biological Chemistry 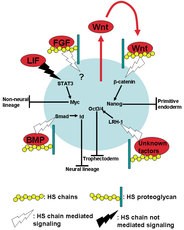 Newswise — Heparan sulfate, a carbohydrate molecule that coats certain proteins on the cell surface, is critical for the proper proliferation and potency of embryonic stem cells, researchers report.

Stem cells' tremendous therapeutic potential arises from their ability to continually self-renew and turn into any adult cell type. Researchers have long been trying to uncover the basis of these abilities, but while several proteins and growth factors are known to play a role both inside and outside the cell, the molecular mechanisms remain largely unknown.

Many of the stem-cell associated can attach to heparan sulfate molecules, so Shoko Nishihara and colleagues examined what would happen to mouse stem cells in cell culture if heparan sulfate production was reduced or blocked. They discovered that three of the major external factors promoting stem cell renewal (proteins called Wnt, FGF, and BMP) could not induce the proper signals inside the cell without HS.

As a result, HS deficient cells grew more slowly, and also spontaneously differentiated into other cells more often, at rates that correlated with the level of inhibition. Nishihara and colleagues propose that heparan sulfate might be the cell-surface component that mediates the external and internal signals promoting stem cell renewal, and could be an important target for stem cell engineering.

Researchers have uncovered the mechanism that contributes to the buildup of fibrous lung tissue in patients with severe acute respiratory syndrome (SARS), finding that a SARS viral protein important for replication can enhance pulmonary fibrosis by inhibiting the activity of the enzyme that breaks down connective tissue. The results offer up a new pathway to treat the pulmonary damage of SARS.

Infection with the SARS virus can lead to severe inflammation in the lungs, which can lead to respiratory distress, fibrosis, and eventually lung failure. Ye-Guang Chen and colleagues tested the effect of a SARS viral protein, the nucleocapsid protein (the protein that binds the virus's genetic material), on human lung cells and found that this protein can bind to a cellular protein called Smad3.

By associating with Smad3, the nucleocapsid protein accomplishes two things. First, it prevents Smad3 from binding to its partner Smad4 and initiating cell suicide, allowing the virus to replicate longer. At the same time, Smad3-Nucleocapsid binding stimulates a separate pathway that promotes the production of collagen and an inhibitor (PAI-1) of the plasminogen protein, which breaks down non-cell materials and other build-up in the body, leading to lung fibrosis. So, in a trade-off, the SARS virus increases its short-term gain at the expense of long-term damage to its host.

Kynurenic acid is the only known naturally occurring blocker of neuronal NMDA receptors, and abnormal amounts of this chemical in the brain are associated with several psychiatric disorders, including schizophrenia. Researchers have now discovered the 3D structure of the enzyme that synthesizes KYNA, which may potentially lead to new drug targets.

KYNA is created by an enzyme called kynurenine aminotransferase II (KAT-II). Jianyong Li and colleagues at Virginia Tech have now solved the structure of both the enzyme and KAT-II complexed with the precursor chemical kynurenine at high resolution.

The structures revealed a bit of a surprise in that the first 65 amino acids of KAT-II fold in a unique way, giving KAT-II a different shape than related aminotransferase enzymes. The authors propose that KAT-II represents a novel subclass of its enzyme family. So, in addition to providing a detailed molecular model for rational drug development, the unusual structure of this enzyme suggests it would be an ideal drug target since the risks of drugs affecting related enzymes would be greatly reduced.

The American Society for Biochemistry and Molecular Biology is a nonprofit scientific and educational organization with over 11,900 members in the United States and internationally. Most members teach and conduct research at colleges and universities. Others conduct research in various government laboratories, nonprofit research institutions and industry. The Society's student members attend undergraduate or graduate institutions.

Founded in 1906, the Society is based in Bethesda, Maryland, on the campus of the Federation of American Societies for Experimental Biology. The Society's purpose is to advance the science of biochemistry and molecular biology through publication of the Journal of Biological Chemistry, the Journal of Lipid Research, and Molecular and Cellular Proteomics, organization of scientific meetings, advocacy for funding of basic research and education, support of science education at all levels, and promoting the diversity of individuals entering the scientific work force. For more information about ASBMB, see the Society's Web site at http://www.asbmb.org.