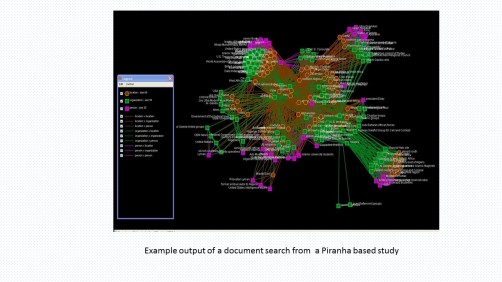 With Piranha, Almeria Analytics can make sense of vast amounts of data in mere minutes. 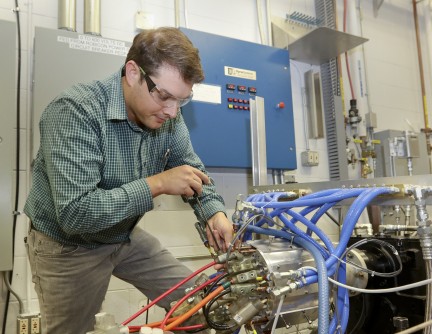 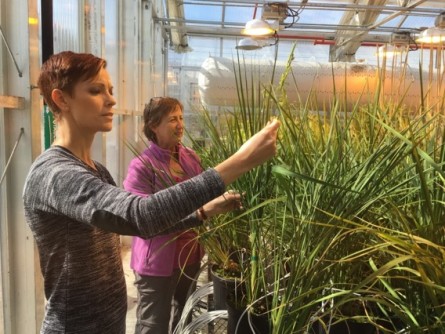 To arrange for an interview with a researcher, please contact the Communications staff member identified at the end of each tip. For more information on ORNL and its research and development activities, please refer to one of our media contacts. If you have a general media-related question or comment, you can send it to news@ornl.gov.

Newswise — New Mexico’s Almeria Analytics has added a suite of Oak Ridge National Laboratory software technologies to its arsenal of tools useful for disaster relief, civil engineering, urban planning and homeland security applications. Piranha, Raptor and DTHSTR combined with ORNL’s VERDE, licensed last year by Almeria, will allow the company to create a software package that can quickly and efficiently search millions of documents in minutes. Almeria provides real-time status of infrastructure during significant events. “We generate a lot of documents from real-time sensor and reporting feeds, so by adding this capability we will be able to further refine our real-time reporting capabilities,” said Steve Fernandez of Almeria Analytics. [Contact: Ron Walli, (865) 576-0226; wallira@ornl.gov]

Caption: With Piranha, Almeria Analytics can make sense of vast amounts of data in mere minutes.

A technology being developed at Oak Ridge National Laboratory could be a valuable tool for urban planning, emergency management and understanding where people are and how they move. Researchers are developing a wireless sensor network that uses signals from cell towers to examine population density in real time, which is important to understand accessibility and livability in urban areas. “Our system works by passively capturing cell tower signals with a radio frequency antenna tuned to specific frequency bands,” said ORNL’s Teja Kuruganti, one of the developers. Researchers expect this technology to be useful for LandScan and other population databases. [Contact: Ron Walli, (865) 576-0226; wallira@ornl.gov]

Researchers at Oak Ridge National Laboratory have developed a novel, nontoxic fluorescent air leak detection system that can find cracks in walls and roofs in existing and new buildings. In laboratory experiments, ORNL’s Diana Hun and Brenda Smith used an off-the-shelf humidifier to release a water-based solution of commercially available riboflavin, or Vitamin B2, supplement against a plywood wall with cracks. When the room was pressurized, tiny vitamin droplets were pulled to the leak points where they accumulated. The vitamins remained invisible unless revealed under ultraviolet light when they fluoresced. “Our system is ideal for occupied buildings, because the solution won’t harm furniture, for instance, plus the vitamin particles are not visible or harmful to occupants,” Hun said. Repair of a leaky home could yield a $450 per year energy savings with a 2.5-year payback. The ORNL-developed system could be used in other spaces such as storage containers. [Contact: Sara Shoemaker, (865) 576-9219; shoemakerms@ornl.gov]

A new motor developed by researchers at Oak Ridge National Laboratory achieved 75 percent higher power than a comparably sized commercial motor for electric vehicles. The prototype motor uses ferrite, iron-based, permanent magnets instead of the expensive imported rare earth permanent magnets common in motors today. “We are focused on increasing energy security for the nation by designing efficient high performance motors built with materials that are both economical and abundantly available here in the United States,” said ORNL’s Tim Burress. “We’ve demonstrated a peak power of 103 kilowatts so far, and we are still fine tuning the motor design.” [Contact: Kim Askey, (865) 946-1861; askeyka@ornl.gov]

A new microscopy technique developed at Oak Ridge National Laboratory enables rapid measurement of the dynamic state of materials used in memory storage and allows “imaging” of this phenomenon with unprecedented resolution (approximately 10 nanometers). The technique, detailed in Nature Communications, acquires the complete information from the microscope sensor that facilitates the extraction of material properties thousands of times faster than the current state of the art. The increased measurement and imaging speed provides a new window for understanding complex and dynamic material properties. Scientists are using this technique to study materials that are promising candidates for the next generation of electronic computing and storage devices. [Contact: Sara Shoemaker, (865) 576-9219; shoemakerms@ornl.gov] Image: https://www.ornl.gov/sites/default/files/news/images/5%20faster%20scanning%20tip%201.jpg

Livestock may soon be getting more nutrition from forage feed thanks to an invention from the BioEnergy Science Center at Oak Ridge National Laboratory and partners at the University of Tennessee and West Virginia University. Working with a population of poplar trees, the scientists identified a gene that regulates the production of lignin, the material that lends plants rigidity. By altering lignin synthesis, the gene can decrease lignin content and increase desirable flavonoids, resulting in plants that are easier to digest and more nutritious. Preliminary studies showed that the genetic mechanism has the same effect in Medicago truncatula, a model system for alfalfa, which is widely used for animal feed. “We’ve achieved decreases in lignin of up to 25 percent and increases in flavonoid content of more than 250 percent using this genetic mechanism,” said ORNL lead researcher Wellington Muchero. Forage Genetics International, a major supplier of alfalfa seed, has licensed the technology and will evaluate it for commercial use in animal feed. [Contact: Kim Askey, (865) 946-1861; askeyka@ornl.gov] 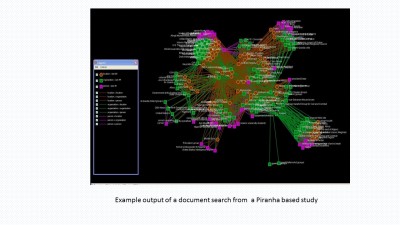 Caption: With Piranha, Almeria Analytics can make sense of vast amounts of data in mere minutes. 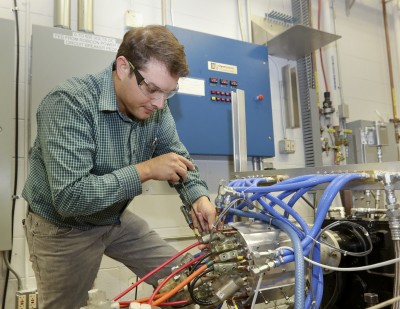 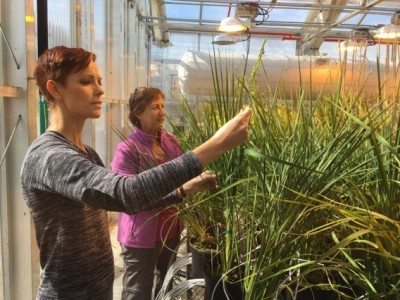