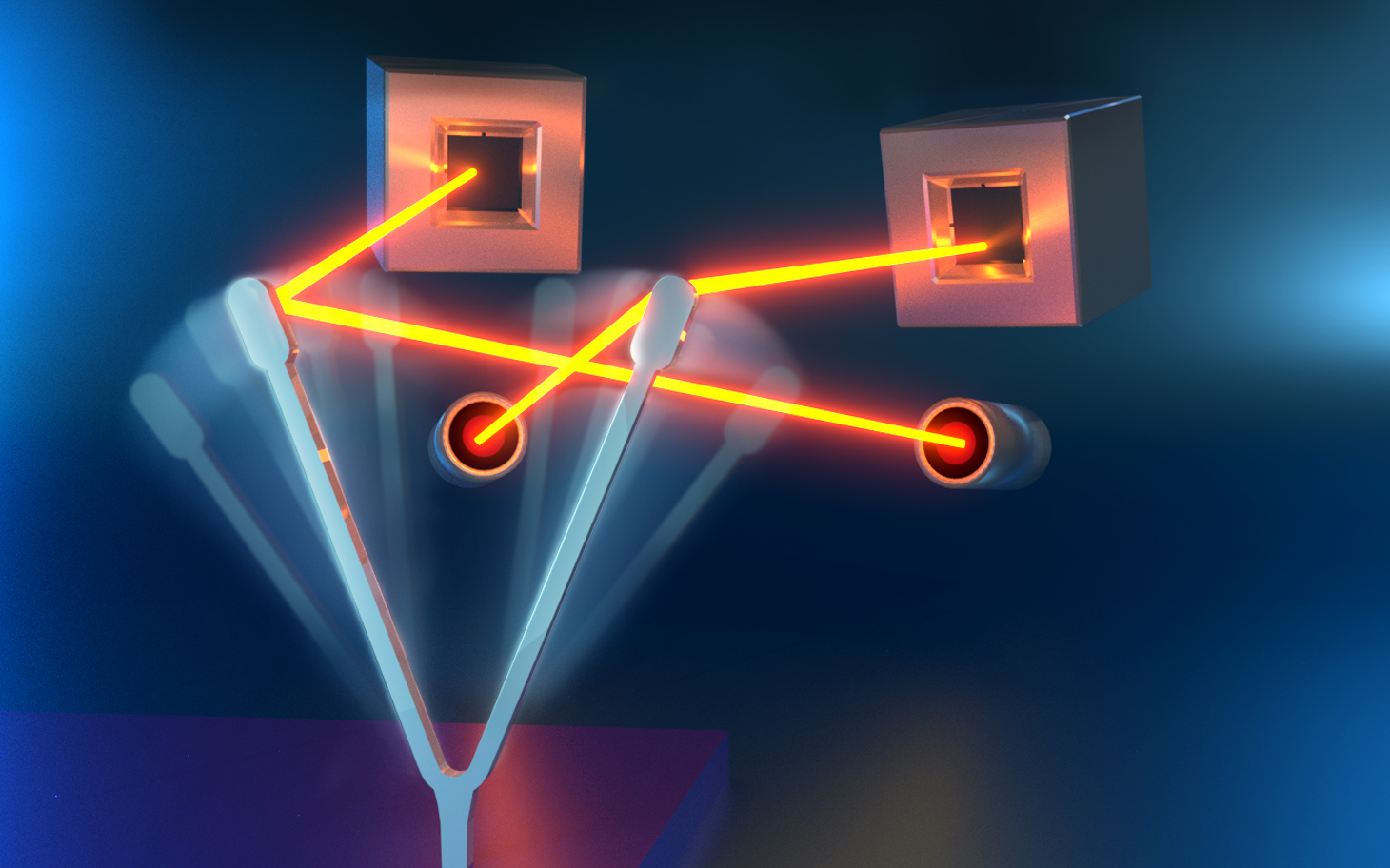 Newswise — Researchers at Oak Ridge National Laboratory and the National Renewable Energy Laboratory took inspiration from flying insects to demonstrate a miniaturized gyroscope, a special sensor used in navigation technologies. Gyroscopes sense rotational motions to provide directional guidance without relying on satellites, so they are immune to signal jamming and other cyber threats, making them ideal for aircraft and submarines. Integrating the devices into smaller defense and consumer electronics has been challenged by fundamental obstacles. At micro sizes, gyroscopes’ electrical components can produce noise that interferes with their operation. To maintain performance at microscale, the team developed an all-mechanical device with no on-chip electrical components. The coin-sized design, fabricated at the Center for Nanophase Materials Sciences, mimics halteres, the vibrating wing-like organs flying insects use to navigate. “Our goal was to optimize cost and performance in the smallest design possible to expand the market for this technology,” said ORNL’s Nick Lavrik. [Contact: Ashley Huff, (865) 241-6451; huffac@ornl.gov]

Oak Ridge National Laboratory researchers created and tested new wireless charging designs that may double the power density, resulting in a lighter weight system compared with existing technologies, while maintaining safety. The hands-free method includes a set of two charging coils—one to be affixed underneath an electric vehicle and the other at ground level. When the coils are aligned, the power transferred charges the vehicle’s battery. The team’s designs, described in a recent study, include a three-phase system that features rotating magnetic fields between layers of coils. “The layered coil design transfers power in a more uniform way, allowing for an increase in power density,” ORNL’s Jason Pries said. The three-phase system has successfully transferred 50 kilowatts with 95% efficiency. “As we scale up the system to transfer up to 300 kilowatts, the specific power is expected to improve as well.” This research brings the team another step closer to fully charging an EV in 20 minutes. [Contact: Sara Shoemaker, (865) 576-9219; shoemakerms@ornl.gov]

If humankind reaches Mars this century, an Oak Ridge National Laboratory-developed experiment testing advanced materials for spacecraft may play a key role. NASA is considering nuclear thermal propulsion—a way to power spacecraft with a nuclear reactor, which could cut travel times in half compared to traditional rockets. A nuclear-fueled system will need sophisticated materials that can withstand extreme temperatures, hydrogen propellant, and radiation. ORNL’s experiment exposed prototype components to electrically heated temperatures reaching over 2,400 degrees Celsius. Soon, scientists will take a scaled-up version, containing fuel surrogates and instrumentation, to the Ohio State University Research Reactor and see how it fares when neutron irradiation is added. “There’s nothing out there like this,” said ORNL’s Richard Howard. “We’ve built a remarkably efficient platform for reproducing extreme temperatures, and we’re confident the scaled-up version will perform just as well.” Future work may include an even larger version to test full-size fuel elements or other reactor components. [Contact: Jason Ellis, (865) 241-5819; ellisjk@ornl.gov]

A team of scientists at Oak Ridge National Laboratory and Georgia Institute of Technology found that critical interactions between microbes and peat moss break down under warming temperatures, impacting moss health and ultimately carbon stored in soil. They investigated the mosses’ reaction to a range of temperatures onsite at SPRUCE, a whole-ecosystem warming experiment in the peatlands of Minnesota. Using genomic analyses, the team showed that the heat caused microbial diversity to decline, reducing the microbiome’s ability to capture nitrogen from air for moss to use. “Sphagnum mosses and their microbiomes substantially control the cycling of carbon and nitrogen across the landscape,” ORNL’s David Weston said. “We are looking at what is causing this breakdown in the relationship between mosses and microbes.” This research advances understanding of how changing environmental conditions might affect nearly one-third of the world’s soil organic carbon currently stored in northern peatland ecosystems. [Contact: Kim Askey, (865) 576-2841; askeyka@ornl.gov]

Caption: Enclosures at the Spruce and Peatland Responses Under Changing Environments, or SPRUCE, experiment are set at five different temperatures and elevated levels of carbon dioxide to study how plants and microbes react to a warmer climate above and below ground. Credit: Paul Hanson/Oak Ridge National Laboratory, U.S. Dept. of Energy

Researchers at Oak Ridge National Laboratory, in collaboration with Lincoln Electric and Dienamic Tooling Systems, demonstrated that an additively manufactured hot stamping die can withstand up to 25,000 usage cycles, proving that this technique is a viable solution for production. ORNL is working with industry to develop a large-scale metal wire-arc process that reduces the cost and shortens lead times required to manufacture the dies, which are used to shape and cut materials. “Conventional manufacturing allows water channels to only be machined in straight lines, but additive manufacturing lets water channels follow the shape of the die more uniformly to allow for optimized temperature reduction,” ORNL’s Andrzej Nycz said. “With this manufacturing method, we can also use different materials within the same die to improve the design.” The ability to additively manufacture dies is a benefit to the United States’ manufacturing industry because most hot stamping dies are imported. [Contact: Jennifer Burke, (865) 576-3212; burkejj@ornl.gov]