Strategy Could Lead to Emission-Free Cars 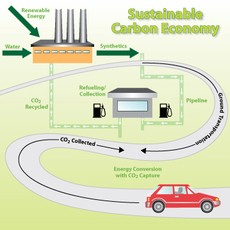 An illustration explaining Georgia Tech's plan for a sustainable carbon economy for vehicles and other small engines.

Newswise — Researchers at the Georgia Institute of Technology have developed a strategy to capture, store and eventually recycle carbon from vehicles to prevent the pollutant from finding its way from a car tailpipe into the atmosphere. Georgia Tech researchers envision a zero emission car, and a transportation system completely free of fossil fuels.

The research was published in Energy Conversion and Management. The research was funded by NASA, the U.S. Department of Defense NDSEG fellowship program and Georgia Tech's CEO (Creating Energy Options) Program.

"Presently, we have an unsustainable carbon-based economy with several severe limitations, including a limited supply of fossil fuels, high cost and carbon dioxide pollution," said Andrei Fedorov, associate professor in the Woodruff School of Mechanical Engineering at Georgia Tech and a lead researcher on the project. "We wanted to create a practical and sustainable energy strategy for automobiles that could solve each of those limitations, eventually using renewable energy sources and in an environmentally conscious way."

Little research has been done to explore carbon capture from vehicles, but the Georgia Tech team outlines an economically feasible strategy for processing fossil or synthetic, carbon-containing liquid fuels that allows for the capture and recycling of carbon at the point of emission. In the long term, this strategy would enable the development of a sustainable transportation system with no carbon emission.

Georgia Tech's near-future strategy involves capturing carbon emissions from conventional (fossil) liquid hydrocarbon-fueled vehicles with an onboard fuel processor designed to separate the hydrogen in the fuel from the carbon. Hydrogen is then used to power the vehicle, while the carbon is stored on board the vehicle in a liquid form until it is disposed at a refueling station. It is then transported to a centralized site to be sequestered in a permanent location currently under investigation by scientists, such as geological formations, under the oceans or in solid carbonate form.

In the long-term strategy, the carbon dioxide will be recycled forming a closed-loop system, involving synthesis of high energy density liquid fuel suitable for the transportation sector.

Georgia Tech settled on a hydrogen-fueled vehicle for its carbon capture plan because pure hydrogen produces no carbon emissions when it is used as a fuel to power the vehicle. The fuel processor produces the hydrogen on-board the vehicle from the hydrocarbon fuel without introducing air into the process, resulting in an enriched carbon byproduct that can be captured with minimal energetic penalty. Traditional combustion systems, including current gasoline-powered automobiles, have a combustion process that combines fuel and air — leaving the carbon dioxide emissions highly diluted and very difficult to capture.

"We had to look for a system that never dilutes fuel with air because once the CO2 is diluted, it is not practical to capture it on vehicles or other small systems," said David Damm, PhD candidate in the School of Mechanical Engineering, the lead author on the paper and Fedorov's collaborator on the project.

The Georgia Tech team compared the proposed system with other systems that are currently being considered, focusing on the logistic and economic challenges of adopting them on a global scale. In particular, electric vehicles could be part of a long-term solution to carbon emissions, but the team raised concerns about the limits of battery technology, including capacity and charging time.

The hydrogen economy presents yet another possible solution to carbon emissions but also yet another roadblock — infrastructure. While liquid-based hydrogen carriers could be conveniently transported and stored using existing fuel infrastructure, the distribution of gaseous hydrogen would require the creation of a new and costly infrastructure of pipelines, tanks and filling stations.

The Georgia Tech team has already created a fuel processor, called CO2/H2 Active Membrane Piston (CHAMP) reactor, capable of efficiently producing hydrogen and separating and liquefying CO2 from a liquid hydrocarbon or synthetic fuel used by an internal combustion engine or fuel cell. After the carbon dioxide is separated from the hydrogen, it can then be stored in liquefied state on-board the vehicle. The liquid state provides a much more stable and dense form of carbon, which is easy to store and transport.

The Georgia Tech paper also details the subsequent long-term strategy to create a truly sustainable system, including moving past carbon sequestration and into a method to recycle the captured carbon back into fuel. Once captured on-board the vehicle, the liquid carbon dioxide is deposited back at the fueling station and piped back to a facility where it is converted into a synthetic liquid fuel to complete the cycle.

Now that the Georgia Tech team has come up with a proposed system and device to produce hydrogen and, at the same time, capture carbon emissions, the greatest remaining challenge to a truly carbon-free transportation system will be developing a method for making a synthetic liquid fuel from just CO2 and water using renewable energy sources, Fedorov said. The team is exploring a few ideas in this area, he added.