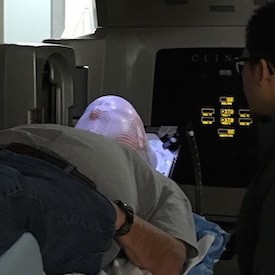 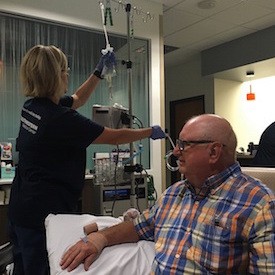 Dennis Kothmann prepares to receive his latest infusion of a medication designed to help his immune system fight brain cancer. The 71-year-old retired math teacher was diagnosed last fall with glioblastoma and opted to help test the experimental treatment rather than undergo chemotherapy. 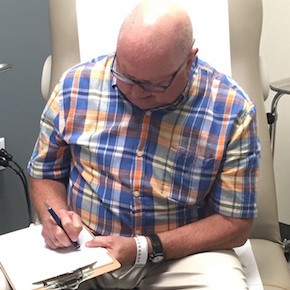 Dennis Kothmann is asked by his doctor to count down from 100 by sevens, an exercise aimed at measuring his recently diminished memory and concentration. The 71-year-old retired math teacher was diagnosed last year with glioblastoma, the deadliest form of primary brain cancer. 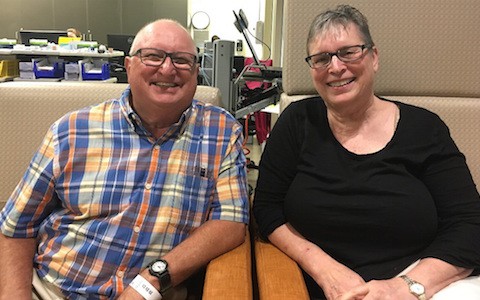 Dennis and Candace Kothmann, married for 26 years, are hoping a new approach to fighting brain cancer can extend or save Dennis’ life. Mr. Kothmann was diagnosed last fall with glioblastoma, the deadliest form of primary brain cancer.

Newswise — DALLAS – June 13, 2017 – Dennis Kothmann jots several numbers on a clipboard then pauses, his pen frozen on the last figure. His eyebrows furrow and he quietly mouths a calculation.

His doctor sits across from him, gauging how well the retired math teacher and calculus whiz can count down from 100 by sevens – an exercise aimed at measuring his recently diminished memory and concentration.

“It’s a difficult calculation to keep in my head,” admits Mr. Kothmann, whose clipboard is soon filled with a series of mistakes.

The 71-year-old patient at UT Southwestern Medical Center has endured several life changes since being diagnosed last fall with glioblastoma, the deadliest and most common form of primary brain cancer. Doctors surgically removed a tumor from Mr. Kothmann’s brain and performed radiation, extending his life by at least several months but also permanently weakening his cognition.

Now he’s looking to scientific ingenuity to save his life.

Mr. Kothmann is among a pool of glioblastoma patients across the globe who are opting against the standard treatment of chemotherapy in favor of playing a crucial role in perhaps ushering in a new era of fighting brain cancer. He is participating in an international clinical trial involving immunotherapy, while other patients are testing everything from cap-like devices that produce electric fields to medications that disable cancer-associated proteins.

“Chemo hasn’t worked very well for other people with this disease,” the Fort Worth native explained as a nurse prepared to deliver his latest infusion through his arm. “Why not try something different, give yourself a chance?”

Glioblastoma kills most patients within months without the standard care of tumor-removing surgery, radiation, and chemotherapy. With those treatments, about half will still die in about 14-15 months.

The standardized care was established little more than a decade ago, and since then scientists have kept working to find more effective approaches to fighting the tumors. A large part of that effort is focused on immunotherapy – using the body’s immune system to protect against and destroy cancer cells.

Because glioblastoma has an ability to turn down the body’s immune response and go undetected, doctors have developed several experimental approaches aimed at helping the body recognize and attack the tumors.

One involves mixing white blood cells with cells from an extracted tumor and injecting them back into the patient as a vaccine. Another medication – being tested by Mr. Kothmann – is designed to disable the tumor’s ability to go undetected and allow the immune system to do its job.

Dr. Edward Pan, who oversees the neuro-oncology clinical trials at UT Southwestern, said results from multiple immunotherapy studies around the world will give scientists an idea within the next year of whether the approach holds promise.

But even if the immunotherapies benefit only a portion of patients, the data could help scientists identify a series of individualized treatments that could be selectively chosen based on the patient.

“It may be that the ultimate cure lies in personalized medicine, where people with the same kind of tumor respond to very different treatments,” said Dr. Pan, Medical Director of UT Southwestern’s Annette G. Strauss Center for Neuro-Oncology.

UT Southwestern is implementing other cutting-edge strategies to treat brain cancer, including a tool that measures the chemicals within a tumor to more quickly determine whether a treatment is working.

Doctors are also working to organize a clinical trial that would test a combination of treatments intended to kill tumors by disabling proteins that help the cancer cells survive. The effort stems from a new study that found the medications – traditionally used separately to treat lung cancer and arthritis – eliminated the brain tumors in mice when used together.

In addition, Dr. Pan is part of a team measuring the efficacy of a special cap designed to kill cancer cells by creating low intensity electric fields that disable cell division. Patients cover their scalp with electrodes linked to a portable generator and are asked to use the device for at least 18 hours a day.

A study published this year showed 13 percent of patients who used the device plus chemotherapy were alive after five years compared to 5 percent who underwent only chemotherapy.

Dr. Pan is unsure how effective these strategies will be in the long term but is thankful to have patients like Mr. Kothmann willing to help find answers.

“If patients want doom and gloom, there’s no reason for them to enroll in these trials. The reason they come here is because they want to know if there’s something else for them beyond the standard treatment regimen,” said Dr. Pan, Associate Professor of Neurology & Neurotherapeutics and Neurological Surgery.

A Strategy of Hope

Mr. Kothmann explains his bout with brain cancer with an inspiring air of positivity, his jovial smile belying the grim prospects for beating such a disease.

Then his eyes suddenly well with tears as he describes how his wife Candace – sitting next to him – has helped him cope. Moments later the tears are gone, replaced by another broad smile.

“There’s no sense in getting down,” Mr. Kothmann said, his wife nodding in agreement. “That’s not going to make me better.”

Mr. Kothmann was diagnosed with glioblastoma in November, the discovery stemming from unexplained symptoms that prompted a visit to the doctor. Severe headaches. Bouts of confusion. Vision problems. He was even occasionally colliding with the sides of doorways.

“He wasn’t as mentally sharp,” Mrs. Kothmann said. “He’s a very smart man, so I figured something could be wrong.”

Brain imaging later showed a tumor had affected his optical nerve, permanently limiting his vision in the right side of both eyes. But the family didn’t know the serious nature until doctors surgically removed the tumor and diagnosed him with glioblastoma.

“I remember seeing him crying sometime after the surgery and I asked him why,” Mrs. Kothmann said. “He told me, ‘I’m just so happy. Life is wonderful.’”

The Kothmanns have been married 26 years and have three adult children, including a daughter whose expertise as a nurse helped guide her father toward UT Southwestern where Dr. Pan signed him up for a clinical trial.He resumed his work as a math tutor at Tarrant County College, determined to continue life as normal. But he soon had to retire, the surgery and radiation treatments taking their toll on his concentration and short-term memory.

Mr. Kothmann shows up every two weeks for immunotherapy infusions, hoping not only to beat the disease but eventually return to the job he loves.

In the meantime, he offers a simple piece of advice to other newly diagnosed brain cancer patients: “Don’t think about it,” he said. “Think about getting well. You just go with what you’ve got and do the best you can.”