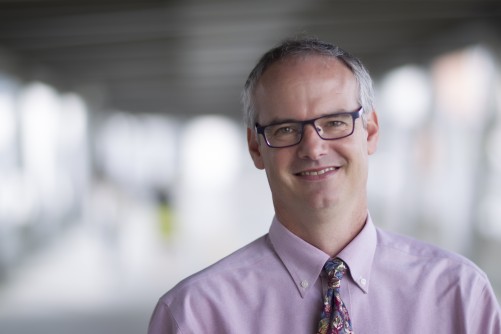 Daniel S. Reuland, MD, MPH, is a UNC Lineberger member and professor in the UNC School of Medicine.

Newswise — CHAPEL HILL – University of North Carolina Lineberger Comprehensive Cancer Center researchers have identified a strategy that doubled screening rates for colorectal cancer, the second leading cause of cancer death in the United States, among patient groups who historically have had lower rates.

The researchers report in the Journal of the American Medical Association Internal Medicine that providing one-on-one support and customized tools for decision-making increased screening rates for patients at two community health centers in North Carolina and New Mexico. They were able to boost screening rates to 68 percent, which was 41 percentage points higher than the group who did not receive the intervention.

“We know colon cancer screening is effective, but we also know we’re losing opportunities to prevent deaths from colon cancer because screening rates aren’t as high as they should be. This is particularly true in vulnerable patient populations,” said the study’s lead author, Daniel S. Reuland, MD, MPH, a UNC Lineberger member and professor in the UNC School of Medicine. “We’ve shown that if we structure care such that we catch patients right when they are seeing their doctor, systematically provide them with clear and compelling information about screening and what their choices are, and then give them personal support they need to get screening test they prefer, we can substantially improve rates.”

Screening has been proven to be effective in reducing colorectal cancer deaths in the United States, and regular screening is recommended for people between 50 and 75 years. But researchers report screening rates are low in some groups, particularly for people who are low-income, on Medicaid, have limited English proficiency, and some minority groups.

In their new study, the researchers tested a strategy to improve screening rates for 265 patients at community health clinics in North Carolina and New Mexico. The majority of patients were Latino, low income, on Medicaid or lacking insurance.

Before their appointments, study participants watched an “decision aid” video in English or in Spanish about their colon cancer screening options, which included colonoscopy as well as a home test that allows patients to mail in a sample of their stool. The participants met one-on-one with a patient navigator who followed up about their plans for a colonoscopy appointment or home test.

Overall, 68 percent of study participants who watched the video and met with a patient navigator were screened for colorectal cancer within 6 months, compared to 27 percent of patients who did not receive the intervention.

“This study gives us one model for effective health interventions in vulnerable populations,” said Michael Pignone, MD, MPH, chair of internal medicine at Dell Medical School and a former UNC Lineberger researcher. “Providing patients with personal follow-up and customized tools for making decisions about their health are two beneficial tactics.”

The researchers said giving study participants a choice in the type of test they received helped to boost screening uptake. And using the evideo helped them have an informed discussion and share the decision with their physician, who might not otherwise have elicited the patients’ preference regarding screening tests.

“Colonoscopy is just one of several screening tests recommended by the U.S. Preventive Services Task Force,” Brenner said. “Studies have shown that offering only colonoscopy results in lower adherence to screening than offering a choice, and our study appears to confirm that.”

They also concluded that combining the video with patient meetings with a navigator also contributed to the intervention’s success. Navigators helped to make sure patients received a stool test kit if they wanted it, did not lose or forget to complete mailed test, to access financial assistance programs, and to schedule a colonoscopy.

“We think that these two interventions are working synergistically, they were delivered systematically by non-physician members of the care team, and the system was set up so that it should work even if the doctor doesn’t have time to address this particular issue during the visit,” Reuland said. “That’s part of the ‘secret sauce.’”

“Doctors sometimes have 12 to 15 minutes to address multiple important health issues and concerns, and colon cancer screening can fall off the list because it’s not urgent, and sometimes people don’t want to deal with it,” Reuland said. “But really putting a system in place that says everyone who is due for screening should get clear and consistent decision support, and navigation help if they need it, increases screening rates.”

Reuland added that the findings have policy implications because community health centers often don’t have the resources they need to do this systematically. “Resources need to be allocated to do what needs to be done to deliver high-value, evidence-based care like colon cancer screening,” he said. “We are seeing that if we design and resource primary care appropriately, we can deliver evidence-based care, and improve the value of care we deliver to individual patients and to society.”