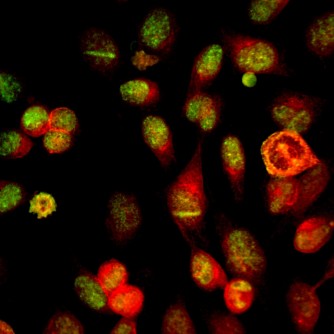 Elongin A (green) and CUL5 (red) in cells enrich at sites of localized DNA damage.

Newswise — Kansas City, MO. — If DNA is the cookbook of life, then RNA is the scratch paper where the cell writes down its favorite recipes. These recipes could make the pigments of your skin, the vehicles that carry oxygen through your veins, or the signaling molecules that keep cancer in check. Sometimes, when the cell’s transcription machinery copies these recipes, it stutters or stalls, either because it gets off task or it comes across a problem with the cookbook. Then, the cell has to decide whether to keep going or give up on the recipe.

Researchers at the Stowers Institute for Medical Research and elsewhere have shown that a molecule called elongin A plays two roles in this process. When cells are normal and unstressed, the molecule keeps transcription moving so that genes are “expressed” and RNA is jotted down more quickly. When cells are stressed and transcription runs into a glitch caused by damage to the DNA, it marks the machinery to be disassembled. Now, Stowers scientists and their collaborators have discovered how the molecule morphs between these two alternate identities, one as facilitator and the other as destroyer.

The findings are reported in the Journal of Biological Chemistry.

“For any cell, transcriptional regulation and gene expression is a very delicate balancing act. If the machinery gets stalled on a gene it becomes a physical block to transcription. That can have a devastating effect if the gene is a tumor suppressor gene or an essential survivor gene, and it can’t be transcribed until the machinery is removed,” says Juston Weems, Ph.D., a postdoctoral research associate and lead author of the study. “Understanding how elongin A helps to disassemble the transcription machinery gives us insight into diseases like cancer that can result when genes are inappropriately turned on or off.”

To turn a gene on, parts of the transcription machinery proceed in a stepwise fashion along specific sections of DNA in order to convert the genetic information in the DNA into a working copy of RNA. Transcription doesn’t always go smoothly, and the machinery stutters occasionally when it gets a bit askew or off track. It can also stall or stop altogether when it hits a glitch – a section of DNA that is damaged from exposure to ultraviolet radiation or just simple wear-and-tear.

For almost three decades, Investigators Joan Conaway, Ph.D. and Ronald Conaway, Ph.D. have studied the fundamental mechanisms that drive transcription. Many of their discoveries have centered on elongin A, a molecule that plays two parts in this process. Elongin A helps to elongate the strands of RNA that come out of the transcription machinery by speeding up the rate at which DNA is copied into RNA. In addition, it helps to get rid of stalled polymerases by bringing in molecules that tag the machinery for disposal. In this study, the Conaways and Weems sought to understand how elongin A switches between these two roles. They knew that in the former role, elongin A partners with its sister proteins elongin B and C, but in the latter role it also brings in another protein called Cul5. Therefore, they decided to track its association with Cul5 as a way to monitor its behavior in the cell.

The researchers exposed an entire plate of cells to ultraviolet irradiation to induce DNA damage. They found that elongin A formed a complex in the irradiated cells, but not in healthy cells. In a separate experiment, they used a laser to draw a single line of damage across the DNA that could be visualized under the microscope. By using fluorescent labels to color elongin A and Cul5, the researchers found that these proteins rapidly accumulated at regions of localized DNA damage, like glitter onto streaks of glue.

Next, the researchers wanted to determine what kind of signals could cause elongin A to assemble with Cul5 and form a complex called a ubiquitin ligase. They had already shown that DNA damage could do the trick. But what if the transcription machinery stalled, even in the absence of any DNA lesions? And what would happen if they stressed the cell by other means? The researchers treated cells with a slew of drugs that generated lesions in the DNA, blocked the polymerase, or simulated nutrient starvation, and found that they all triggered elongin A’s shift in roles. “We were very surprised to find that various stimuli that lead to big changes in gene expression, but that weren’t known to stall the polymerase, also caused this shift,” says Joan Conaway, senior author of the study. “It’s possible that the ligase forms under these circumstance just in case the polymerase gets 'stuck' on some critical, newly activated genes. On the other hand, these results raise for the first time the possibility that elongin A might play a positive role in gene activation by some mysterious mechanism that we’d really like to understand.” The researchers plan to pursue this avenue in future studies. They will also continue to explore the variety of signals that shape the behavior of elongin A in hopes of elucidating its roles in the cell.

“One possibility is that a “stuck” polymerase is the primary signal,” says Ronald Conaway, also senior author of the study. “However, there may not be just one signal. There could be differences between signals that drive assembly after DNA damage and other stimuli like stress, nutrient starvation, or retinoic acid signaling.”

The work was funded by the Stowers Institute, the National Institutes of Health (GM041628), the Helen Nelson Medical Research Fund at the Greater Kansas City Community Foundation and by KAKENHI (Grant 24590279). The content is solely the responsibility of the authors and does not necessarily represent the official views of the NIH.

The human genome contains about 25,000 genes with the instructions for building all of the proteins in the body. But before construction of any protein can begin, the genetic information contained within the DNA must first be copied into RNA by the cell’s transcription machinery. In the current issue of the Journal of Biological Chemistry, Stowers Institute scientists explore two roles of elongin A, a molecule that can restart the transcription machinery when it sputters or mark it to be decommissioned when it is stalled. Postdoctoral Research Associate Juston Weems, Ph.D., who led the study, explains that understanding the signals that trigger this molecule to halt transcription could give insight into diseases that result from the process going awry. Weems, his research mentors Joan Conaway, Ph.D., and Ronald Conaway, Ph.D., and their collaborators find that these triggers include DNA damage, stalled transcription machinery, and other cellular stresses. About the Stowers Institute for Medical Research

Currently, the Institute is home to almost 550 researchers and support personnel, over 20 independent research programs, and more than a dozen technology development and core facilities.