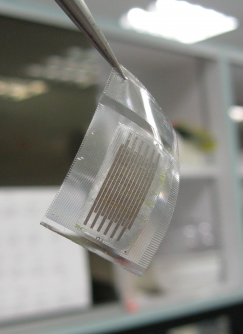 This stretchy supercapacitor made from graphene could spur the development of wearable electronics.

EMBARGOED FOR RELEASE: Tuesday, Aug. 23, 2016, 5 a.m. Eastern Time Note to journalists: Please report that this research will be presented at a meeting of the American Chemical Society.

Newswise — PHILADELPHIA, Aug. 23, 2016 — A future of soft robots that wash your dishes or smart T-shirts that power your cell phone may depend on the development of stretchy power sources. But traditional batteries are thick and rigid — not ideal properties for materials that would be used in tiny malleable devices. In a step toward wearable electronics, a team of researchers has produced a stretchy micro-supercapacitor using ribbons of graphene.

“Most power sources, such as phone batteries, are not stretchable. They are very rigid,” says Xiaodong Chen, Ph.D. “My team has made stretchable electrodes, and we have integrated them into a supercapacitor, which is an energy storage device that powers electronic gadgets.”

Supercapacitors, developed in the 1950s, have a higher power density and longer life cycle than standard capacitors or batteries. And as devices have shrunk, so too have supercapacitors, bringing into the fore a generation of two-dimensional micro-supercapacitors that are integrated into cell phones, computers and other devices. However, these supercapacitors have remained rigid, and are thus a poor fit for soft materials that need to have the ability to elongate.

In this study, Chen of Nanyang Technological University, Singapore, and his team sought to develop a micro-supercapacitor from graphene. This carbon sheet is renowned for its thinness, strength and conductivity. “Graphene can be flexible and foldable, but it cannot be stretched,” he says. To fix that, Chen's team took a cue from skin. Skin has a wave-like microstructure, Chen says. “We started to think of how we could make graphene more like a wave.”

The researchers’ first step was to make graphene micro-ribbons. Most graphene is produced with physical methods — like shaving the tip of a pencil — but Chen uses chemistry to build his material. “We have more control over the graphene’s structure and thickness that way,” he explains. “It’s very difficult to control that with the physical approach. Thickness can really affect the conductivity of the electrodes and how much energy the supercapacitor overall can hold.”

The next step was to create the stretchable polymer chip with a series of pyramidal ridges. The researchers placed the graphene ribbons across the ridges, creating the wave-like structure. The design allowed the material to stretch without the graphene electrodes of the superconductor detaching, cracking or deforming. In addition, the team developed kirigami structures, which are variations of origami folds, to make the supercapacitors 500 percent more flexible without decaying their electrochemical performance. As a final test, Chen has powered an LCD from a calculator with the stretchy graphene-based micro-supercapacitor. Similarly, such stretchy supercapacitors can be used in pressure or chemical sensors.

In future experiments, the researchers hope to increase the electrode’s surface area so it can hold even more energy. The current version only stores enough energy to power LCD devices for a minute, he says.

Chen acknowledges funding from the National Research Foundation, Prime Minister’s Office, Singapore, under its Campus for Research Excellence and Technological Enterprise (CREATE) Programme of Nanomaterials for Energy and Water Management.

Title Flexible Micro-supercapacitors based on graphene

Abstract Micro-supercapacitors with unique two-dimensional (2D) structures are gaining attention due to their small size, high energy density and potential applications in on-chip and portable electronics. Compared to the sandwich structure of conventional supercapacitors, the 2D structure of micro-supercapacitors enables a reduction in the ionic diffusing pathway, and more efficient utilization of the surface area of electrode materials. Meanwhile, emerging wearable electronics require the property of stretchability in addition to flexibility for application on the soft and curved human body that is covered with highly extensible skins. Micro-supercapacitors, as a candidate for essential integrated energy conversion and storage units on wearable electronics, ought to be capable of accommodating large strain while retaining their performance. In this talk, I will present our recent development of highly stretchable micro-supercapacitors with stable electrochemical performance. The excellent stretchable and electrochemical performance relies on the out-of-plane wavy structures of graphene micro-ribbons. It decreases the stain concentration on the electrode fingers, so that the detaching and cracking of the electrode materials could be prevented. In addition, it ensured the electrode fingers keeping relative constant distance, so the stability of the micro-supercapacitors could be enhanced.