An experiment that could have crashed delivers whopping evidence of the translational system's seminal appearance in evolution. 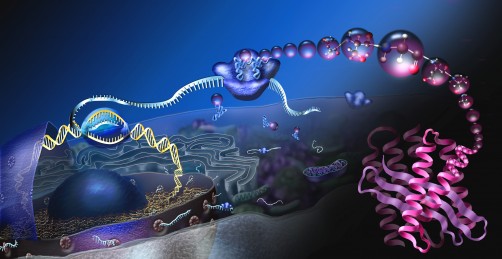 The ribosome (upper middle) is the core of the translational system illustrated here. The system reads DNA via RNA and turns it into proteins to make all beings live. 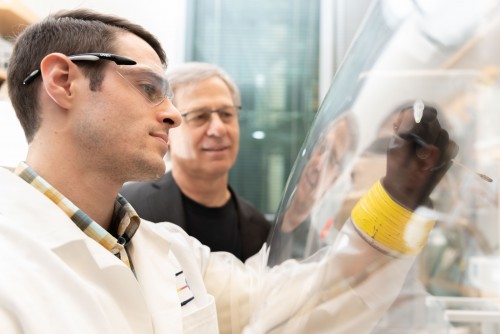 Marcus Bray, front, observes a sample inside a sealed atmospheric tent that has no breathable oxygen. The tent simulates atmospheric gas mixtures during Earth's earliest eon and allows researchers to work with samples by slipping their hands into leak-proof gloves. In the background, co-principal investigator and NASA astrobiologist Loren Williams looks on in his lab at Georgia Tech. 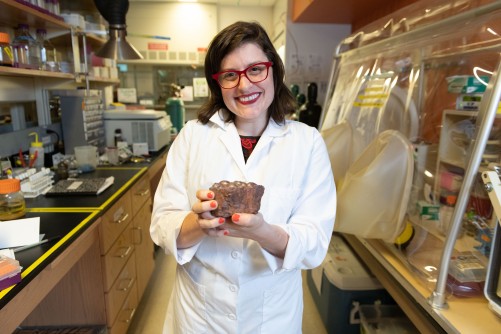 Co-principal investigator Jennifer Glass in her lab at Georgia Tech. She is holding a piece of sedimentary rock full of iron that rusted out of the ocean when breathable oxygen filled Earth's waters and air. Before there was ample breathable oxygen, chemically active iron was very available and very likely was involved in early evolution. It has since become less prevalent in many living systems. So audacious was Marcus Bray’s experiment that even he feared it would fail.

In the system inside cells that translates genetic code into life, he replaced about 1,000 essential linchpins with primitive substitutes to see if the translational system would survive and function. It seemed impossible, yet it worked swimmingly, and Bray had compelling evidence that the great builder of proteins was active in the harsh conditions in which it evolved 4 billion years ago.

The experiment’s success reaffirmed the translational system’s place at the earliest foundations of life on Earth.

Every living thing exists because the translational system receives messages from DNA delivered to it by RNA and translates the messages into proteins. The system centers on a cellular machine called the ribosome, which is made of multiple large molecules of RNA and protein and is ubiquitous in life as we know it.

“There’s nothing alive without ribosomes,” said Loren Williams, a professor at the Georgia Institute of Technology’s School of Chemistry and Biochemistry. “The ribosome is about the oldest and most universal part of biology, and its origins go very far back to a time not too long after Earth had formed and cooled.”

Those linchpins Bray yanked out and replaced were metal ions (atoms with charges, in this case positive).

In today’s ribosome, and in the whole translational system, they are magnesium ions, and Bray’s experiment replaced them all with iron ions and manganese ions, which were overabundant on primordial Earth. Williams and Jennifer Glass, the principal investigators in the new study, also had their doubts this was doable.

“I thought, ‘It’s not going to work, but we might as well try the moonshot’,” said Williams who has led similar work before but on simpler molecules. “The fact that swapping out all the magnesium in the translational system actually worked was mind-boggling.”

That’s because in living systems today, magnesium helps shape ribosomes by holding them together. Magnesium is also needed for some 20 additional enzymes of the translational system. It’s one reason why dietary magnesium (Mg) is so important.

“The number of different things magnesium does in the ribosome and in the translational system is just enormous,” said Williams. “There are so many types of catalytic activities in translation, and magnesium is involved in almost all of them.”

When first life evolved, fissures in Earth’s crust still belched lava and meteor impacts were still common. There was no breathable oxygen and the planet was brimming with iron and manganese.

This may have made them attractive for the translational system to use as the dominant ions. Magnesium was likely involved, too, though it was probably less available than today.

The researchers wanted to know if the translational system first evolved to function with those other metals as their linchpins. So, Bray, a graduate research assistant in Williams’s and in Glass’s lab, swapped out the magnesium ions for them, tabula rasa.

“We didn’t have any substantial reason to believe it would work, and it was a huge surprise to all of us when it did,” Bray said. And it strongly corroborated that the translational system would have thrived under early Earth conditions.

Bray, co-first author Timothy Lenz and co-principal investigators Glass and Williams published their results in the journal Proceedings of the National Academy of Sciences on November 9, 2018. The research was funded by the NASA Exobiology program. Glass is an assistant professor in Georgia Tech’s School of Earth and Atmospheric Sciences.

Amazingly, the atomic swaps barely changed the shape of the ribosome.

“It’s totally unbelievable this would work because biology makes very specific use of things. Change one atom and it can wreck a whole protein,” Williams said. “When we probed the structure, we saw that all three metals do essentially the same thing to the structure.”

When they tested the performance of the translational system with iron replacing magnesium, it was 50 to 80 percent as efficient as normal (with magnesium). “Manganese worked even better than iron,” Bray said.

“I think these may be textbook-rewriting results since the whole field of ribosome research involves magnesium,” Bray said. “Now, with what we’ve done, it’s no longer the case that only magnesium works.”

Bray incubated ribosomes in the presence of magnesium, iron, or manganese inside a special chamber with an artificial atmosphere devoid of oxygen, like the Earth four billion years ago.

He found that the magnesium replacement went far beyond atoms in the ribosome.

“Surrounding the ribosome is also a huge cloud of magnesium atoms. It’s called an atmosphere, or shell, and engulfs it completely. I replaced everything, including that, and the whole system still worked.”

Eons down the road, the evolution of the translational system in the presence of magnesium may have given it an adaptive advantage. As oxygen levels on Earth rose, binding up free manganese and iron, and making them less available to biology, magnesium probably comfortably assumed the thousands of roles it occupies in the translational system today.

These researchers coauthored the study: Jay Haynes, Jessica Bowman, Anton Petrov, Amit Reddi, and Nicholas Hud, all of Georgia Tech. The research was funded by the NASA Exobiology program (grants NNX14AJ87G, NNX16AJ28G, and NNX16AJ29G). Findings, conclusions, opinions, and recommendations in the material are those of the authors and not necessarily of NASA.