18-Nov-2022 2:05 AM EST, by Russian Foundation for Basic Research
favorite_border 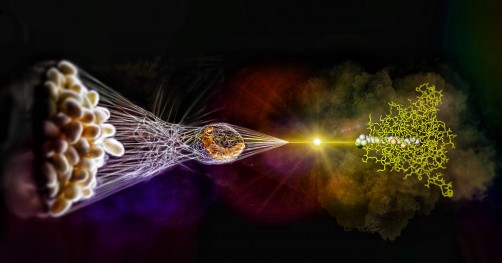 Newswise — The transport protein named STARD3 is thought to be responsible for the accumulation of carotenoids in the human retina. It is carotenoids that work in the so-called “yellow spot” (macula lutea) of the retina, protecting it from oxidative stress and age-related degeneration. Invertebrates, for example, silkmoth Bombyx mori, possess proteins with similar functions, and, probably, a similar structure. A silkmoth protein named BmCBP, which is similar to STARD3, is responsible for the accumulation of carotenoids and the silk cocoon coloration. However, it has been unknown which three-dimensional shape this protein takes to fulfil its function. Biologists from the Research Centre of Biotechnology RAS jointly with colleagues from Moscow, Minsk and Berlin studied BmCBP with the help of crystallography and found out its structural features and carotenoid binding mechanism. These results were published in Structure. The research was carried out with the support of the national project “Science and universities”.

The family of steroidogeniс acute regulatory proteins called START is responsible for transferring various hydrophobic (insoluble in water) substances between various tissues, cells and parts of the eukaryotic cells. Humans have 15 such protein family members, which differ in ligand binding specificity: some of them transfer bile acids, others – various steroid hormones, carotenoids or other lipid molecules. In the structure of each such protein there is a special cavity, inside of which the lipids are bound. The minimal fragment of this protein which can fulfil this function is called a START domain, or STARD. According to the repertoire of the bound lipids, START proteins are given different numbers (from 1 to 15). The differences in the organization of the cavity of the START proteins define which lipids will bind to them. The scientists from the Research Centre of Biotechnology of RAS compared in detail the structure of STARD3 and its homolog BmCBP from silkmoth.

“We solved the three-dimensional structure of BmCBP from silkmoth at high resolution. This protein binds and transfers carotenoids, which defines the coloration of silk, and we know that the sericulture is more than 4000 years old. However, carotenoids are also particularly important for human health, because they possess antioxidant characteristics. Theoretically, this protein can be used for the targeted delivery of antioxidants. It could help to counteract oxidative stress, which is the main cause of age-related retinal degeneration”, - points the lead author of the article, Nikolai Sluchanko, Dr.Sci. (Biology), Head of the Group “Protein-Protein Interactions” of the Research Centre of Biotechnology of RAS.

Carotenoids play an important role in human vision, helping to protect retina from ultraviolet and photodamage, which with age can cause retinal degeneration. If there is a shortage of carotenoids in the diet, the vision can worsen. That’s why it is recommended to eat products reach in carotenoids – for example, berries, fruit and green vegetables. The scientists have shown that BmCBP can bind carotenoids of a different type, including zeaxanthin, lutein, canthaxanthin, astaxanthin and others, that are especially vital for human’s health. With the help of site-directed mutagenesis it was shown which amino acid residues of BmCBP define its ability to bind carotenoids. It was also found out that BmCBP is more effective than human STARD3 when it comes to carotenoid binding.

This summer the same group of scientists published an article where they showed the possibility of reconstitution of the functional complex of BmCBP with carotenoids straight in E.coli cells. This discovery enables production of the physiologically active forms of carotenoids complexed by the water-soluble protein BmCBP in E.coli cells at the biotechnological scale. In addition, the third paper, published just recently by the same team of researchers, described the possibility of loading BmCBP by carotenoids from various natural herb extracts and transferring them to other proteins, model biological membranes and even to the live cells, which is attractive for various applications.

“Our data explain the molecular mechanism of capturing and delivery of carotenoids by proteins of the START family. We learned more about the types of carotenoids that these proteins can transfer. It not only enriches our fundamental knowledge, but also opens new avenues for biotechnological production and biomedical use of these proteins, including the treatment of various diseases in the longer term”, - concludes Nikolai Sluchanko.